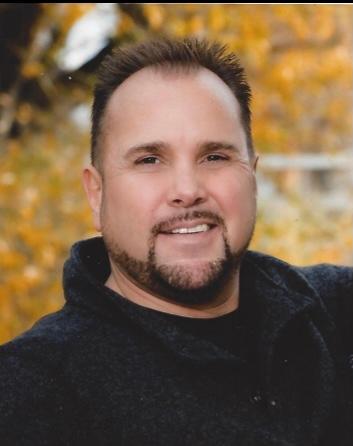 Surrounded by his wife, their two children, his loving family and close friends, Roger Blane Wilkerson, lost his battle to Covid on September 14, 2021 at Campbell County Memorial Hospital. Never a quitter, Roger was hospitalized for over a month with his wife Carrie never leaving his side.

Roger Blane Wilkerson was born on April 27, 1971, a gift to Richard and Peggy (Schneider) Wilkerson in Miles City, Montana.  Roger came home to meet his one and only sister Wendy.  From that moment on they formed an unbreakable bond that will last far into eternity.

Being a part of a very proud and independent oilfield family, Roger was moved wherever the “patch” took them.  Belle Creek, MT-Glenrock, Casper, WY, Dickinson, ND, Lafayette, LA and back to Dickinson where Roger graduated from high school in 1989.  The family had to make another move right after graduation back to wonderful Wyoming – Gillette then became his home.  Traditions set by the men in his family for generations, he decided to sign up for the US Navy. His life as a sailor was an adventure on the high seas. From the mountains to the sea, the Wyoming kid was assigned to the USS George Washington, the newest aircraft carrier in the US Naval fleet, where he was honored to serve in the Persian Gulf War.  During the Persian Gulf War Seaman Wilkerson earned the opportunity to navigate the USS GW through the Suez Canal. Unlike too many of our military personnel to whom all Americans owe their freedom and their way of life, Roger came home to Gillette without harm.

His interest in operating big equipment drew his attention to the railroad where he started as a conductor and worked his way up to an engineer.  During his time on the railroad Roger found the “love of his life” Carrie McCartney. Roger then chose a different career path that kept him closer to home going to work at Black Thunder Coal Mine for over the last 20 years.

On May 7, 2005, Roger married Carrie McCartney. The love they shared was one of a kind that can never be replaced. Roger was a caring and devoted husband and father to their children, son Ty McCartney and daughter Falen, whom was the light of his life and stole his heart.  He embraced the life he and Carrie built together and enjoyed doing the things they loved such as riding their Harley, boating, camping, hunting and spending most of their time together supporting their children in sporting events.  His children’s passion for sports inspired Roger to involve himself in every way he could. From Roger helping and assisting coach his children’s sporting activities, traveling, sports fundraising and being a youth advocate. He had an impact on not only his children, but the lives of all the kids who knew him. Roger’s beautiful smile, his full belly laughs, and his fun-loving personality touched everybody that knew him.

Roger was an avid hunter and fisherman which he loved to do with his father, family members and close friends as well. His love for the great outdoors was his way of sharing his passion and spending quality time with them all. It was more than a passion; it was also his way to teach valuable life lessons to those he loved.

Waiting for Roger at heaven’s gate are all his grandparents, 2 Uncle Gary’s and his chosen “brother by another mother” Collin Jones (cousin)

Trying to fill the void in our lives, is his loving wife Carrie Wilkerson and their children Ty and Falen.  His very proud parents Richard and Peggy Wilkerson of Pine Haven, his sister Wendy and her family Quent, Blane and Korbi Kissack of Rozet as well as his vast array of friends and family.

If Roger’s existence in this life has touched you in any way don’t dwell on the fact that he was taken from us much too soon- remember the man that he was- the legacy that he has left will remain within each of us.  Whether you have just come from a long day of hunting, fishing, on a motorcycle trip, or a day at one of your kids sporting events take a moment to raise a cold drink and remember Roger.

Flowers are a wonderful way to share your feelings; however, it was very important to Roger that his daughter Falen has the opportunity to further her education. We have plans to establish a memorial, Falen’s Fund, for her future.

Gillette Memorial Chapel/ Walker Funeral Home in Gillette will oversee arrangements and condolences can be mailed thru them or on their website.