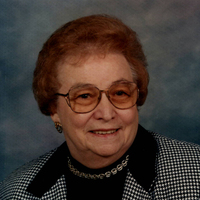 Norma Ellen Appel of Gillette went home to be with her Lord and Savior on November 11, 2021. She was born February 27, 1932, in Sidney Nebraska to Harvey and Luella Clingenpeel. She was raised in various towns in western Nebraska and eastern Wyoming.

She graduated from Campbell County High School in 1950. In 1951 she married her high school sweetheart, Jerry Butcher. From that union three daughters were born, Susan, Patricia, and Jeannette. Jerry died in 1959 in a plane crash.

Norma went to work at the sale barn in Gillette. That is where she met Leonard Appel. They were married in 1963. Norma and Leonard added two more daughters to the family Mary and Kathy.

Norma spent her life being a homemaker and ranchers’ wife. She was an avid gardener while her children were growing up. In the 1980’s she took up quilting, which became a passion of hers for the rest of her life. She and Macsy Haight started the Northeast Wyoming (N.E.W.) Quilters Guilt and later helped found the Prairie Points Quilt Guild which she was a member of until her death. In 2018, Norma was the featured quilter at the Northeast Wyoming Quilt Show.

Norma was an active member of Holy Trinity Episcopal Church, the Daughters of the King and the Wyoming Cowbelles. She served on the Campbell County Recreation Board, RENEW board, and the Republican National Committee.

Norma traveled extensively. She went to Alaska three times, Hawaii twice, Italy, England, she walked the Great Wall of China at age 80, Greece, Australia, Ireland, Panama Canal, Costa Rica, Caribbean Islands, Puerto Rico, Canada, and many of the lower 48 states. In the early 90’s, Norma bought a house in Pine Haven where she spent her summers. It was her favorite place to be, and she cherished the friends that she made there.

Norma is survived by her five children, Susan Butcher, Gillette, Pat (Sebastian) Gross, Delaware, Jeannette Kelley, Texas, Mary Appel, Gillette, Kathy (Mark) Nicholson of Gillette. She has six grandchildren and ten great-grandchildren, Jeff (Sarah) Sherman their children Harper, Brody and Walker, Lacey (Tim) Honea and their children Ciara, Carigan, Wyatt, and Easton, Wesley Brown and his children, Braedon, Tatum and Raygen, Rhonda (Bill) Henderson and their children Rylee and Reed, Kalen Nicholson & Kaleb Nicholson. Her sisters, Jo Butler of Torrington, and Kay (Al) Fowler of Indiana, brother Ron Clingenpeel of Louisiana and numerous nieces and nephews. There were several others that Norma called her daughters, Peggy Heimann Adams of Moorcroft, and Megan Kass of Michigan.  Norma is preceded in death by her parents, husbands Jerry Butcher and Leonard Appel, and her sister Frances.

Memorials may be made to benefit Hospice of Campbell County or the Memorial Garden at Holy Trinity Episcopal Church. Memorials and condolences may be sent in care of Gillette Memorial Chapel 210 West 5th Street, Gillette, WY 82716. Condolences may also be expressed at gillettememorialchapel.com.