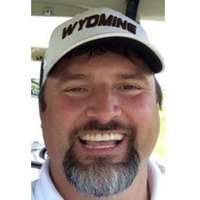 Funeral service for Kirby Drube will be held at 1:00 p.m., Tuesday, October 19, 2021 at Family Life Church with Pastor Marty Crump officiating; interment to follow at Mt. Pisgah Cemetery. Visitation will be held from 3:00 p.m. to 5:00 p.m., Sunday, October 17, 2021 at Gillette Memorial Chapel.

Kirby Richard Drube, 45 of Gillette, Wyoming passed away on October 6, 2021 in Denver, Colorado. Kirby was born on October 10, 1975 to Richard and Frances Drube in Sheridan, Wyoming.

He grew up with his siblings Courtney and Kolby Drube and attended school at Stocktrail Elementary, Twin Spruce Junior High, and Campbell County High School along with many neighborhood friends.

He attended the University of Wyoming where he played 5 years of football and 2 years of baseball. He played tight end, was part of the 1996 WAC Championship team, and made many lifelong friendships. He graduated in 1999 with a degree in physical education, and in May, 2000 he married his college sweetheart Amy Dress Taylor. They had 3 beautiful children, who were his pride and joy, Gabrielle Paige (18), Madalyn Grace (16), and Mason Kirby (15) Drube. Their marriage ended in 2012.

In 2014, he fell in love with Kelleen Edwards. The two combined their families, moved in together, and became engaged to be married. Kirby worked for Cloud Peak Energy from August 2000-2019 as shovel operator and Mine Monitor & Control Technician. He began working for TCRI as Lead Communications Technician in 2019. He also worked for his dad at Royal Heating and Air Conditioning, Inc.

Kirby was a 4-sport athlete and had a passion for playing and coaching his kids and their friends. He was drafted by the Los Angeles Dodgers in 1994 and was later inducted into the Gillette Riders Baseball Hall of Fame in 2016. In 2019 he was inducted into the Wyoming American Legion Baseball Hall of Fame. He volunteered countless hours of coaching for the Gillette Junior Football League, Gillette Little League, and many youth basketball teams. He enjoyed hunting, fishing, camping, and being outdoors. He loved cheering for the Wyoming Cowboys and the Denver Broncos. He could fix anything, and loved to lend a helping hand to friends and neighbors (Bill).

Kirby is survived by his loving and devoted family: His 3 children, Gabrielle, Madalyn, and Mason Drube, his fiance Kelleen Edwards and her children Alexis and Brecken Edwards, his mother Frances Drube, his sister Courtney Drube, and his brother Kolby (Angela) Drube all of Gillette, Wyoming. His nieces and nephews: Kobe, Ryann, Kylie, Erica, Dylan, Liliyana, and Lynnora, His children’s mother Amy (Jason) Taylor aunts, uncles, and many special cousins whom he loved so very much. He was preceded in death by his father, Richard Drube, his grandparents Freddie and Edna Drube, and Orville and Delores Kelley, aunt and uncles.

Memorials and condolences may be sent in care of Gillette Memorial Chapel 210 West 5th Street, Gillette, WY. Condolences may also be expressed at gillettememorialchapel.com.