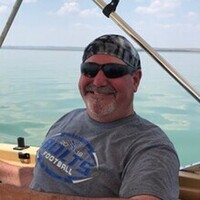 Kendal Ray Carlson passed away at his home in Gillette Wyoming, at the age of 55 on September 18, 2021. He will be deeply missed by his family, friends, neighbors and coworkers.

He is survived by his sons Blake and Brady Carlson and Patrick Rootes and their mother, Melody Preston; his siblings Todd (Jan) Carlson, Janel (Sean) Devins and Scott Carlson; his nieces Amber (Matt) Koehler—Brevin and Teyvin, Ariel (Cody) Brink—Ziah and Selah, and Ella Devins; and his nephews Taber (Elizabeth) Carlson, Ryder Carlson and Skylor May-Carlson.

Kendal was never happier than when he was with his family and friends on the water. To him, being on a boat was an extension of heaven. Anyone in his immediate presence could feel the joy radiating off him as the boat tossed him around, and it was strikingly infectious. He excelled at fishing, water-skiing, making each of his children fly off tubes going Mach-40, and just being the life of any party on the water or on land.

Kendal Ray Carlson was always smiling. Every single person in Kendal’s life meant the world to him, and he made that astonishingly clear. Kendal was a selfless person, meeting each person with a toothy, wide smile that made any person he came into contact with comfortable and engaged. Not only that, but his smile gave so many people a sense of hope, kindness, and kinship.

Kendal Carlson was an adept storyteller. He could often be found employing his boisterous voice and attitude to spin a tale or anecdote, brightening the room in his very special way. His talent for storytelling was heavily accentuated by his love of singing and music. Kendal also loved hunting and watching sporting events with special affection for the Green Bay Packers and the Toronto Blue Jays.

Kendal was born in Sidney, Montana on December 10, 1965 to Carl and Janis (Mitchell) Carlson and grew up in Richey, Montana. He graduated from Richey High School in 1984. He then attended Eastern Montana College in Billings. Kendal returned to Richey where he worked with his dad in the family business, Carlson Construction. He later worked in the oil and gas industry for Key Energy in Sidney, Montana. Kendal and his family eventually moved with Key Energy to Gillette, Wyoming, where he made his home. This led to his work at several coal mines as a production technician.

Kendal was preceded in death by his parents and his sister-in-law Juanita (Scott) Carlson.