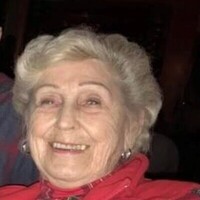 JoAnn White of Gillette, Wyoming, 86, peacefully passed away with family near on Tuesday the 10th of August.

Born in Minnewauken, North Dakota, she was known for her energy, love of people and good whiskey. JoAnn’s life was centered around people and adventure. In her earlier days, she was an avid swing dancer and beautician student. Looking glamorous and starry eyed was the style. Match that with forever hopeful and supportive, and you have her main character.

Two daughters came to her and so did difficult times. With $50 in her pocket and two young girls, she went to Cutbank, Montana where a tall stranger who frequented the bar/restaurant caught her eye as he pretended to read books upside down. Harry White married JoAnn in her hometown and took her to Chicago and added a son to the family. The two always had time from friends and family and made regular trips to North Dakota and Wyoming to visit family.

With the girls gone west, and their son working in Chicago, they retired to Melbourne, Florida. JoAnn did not stop, however, to smell the roses. She began organizing group trips all over the globe, parties, plays, sing-a-longs, and golf outings to name just a few. Clicking a honky-tonk rhythm out the side of her mouth and raising her elbows, she’d dance and say, let’s have a drink.

She blessed many lives. Those golden years were punctuated, after the death of her husband, with a friend, Heinz Peper, who became her partner and moved with her to Gillette, Wyoming to be near family in later years.