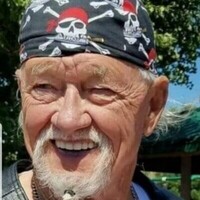 Jerold (Jerry) J. Stouffer, 84, of Gillette, WY passed away September 18, 2021 at his home surrounded by his family and loved ones after a yearlong battle with cancer.

Jerry was born in Gordon, NE on April 25, 1937 to LeRoy and Mildred (Frohman) Stouffer and was raised and educated in Gordon, NE until he enlisted in the U.S. Army.

On November 26, 1966 he married Annette “Ann” Marie Lawrence in Sparta, WI.  To this union three children, Lori Ann, Janel Marie, and Scott Allen were born.  Jerry and Ann were married for 37 years when she passed in 2004 from cancer.

He lived in Casper WY working for WOTCO, Glenrock, WY where he worked for Highland Uranium until being transferred by Exxon to Gillette, WY where he worked at the Rawhide Coal Mine operating shovels and haul trucks until he retired.  He held various other jobs in Gillette including Air Gas and Camplex.

Jerry loved his Harley’s of which he had many throughout the years.  He also was the road captain for several years for the Freedom Ride and many other rides.

He met Helen Jerome in May 2013 who became his significant other until he passed.  They both loved motorcycle riding taking long trips all over the country visiting family.

He was always busy working doing something whether it be woodworking, camping, or tearing something apart in his garage often leaving it tore apart.  Loved being outside in the yard and garage.