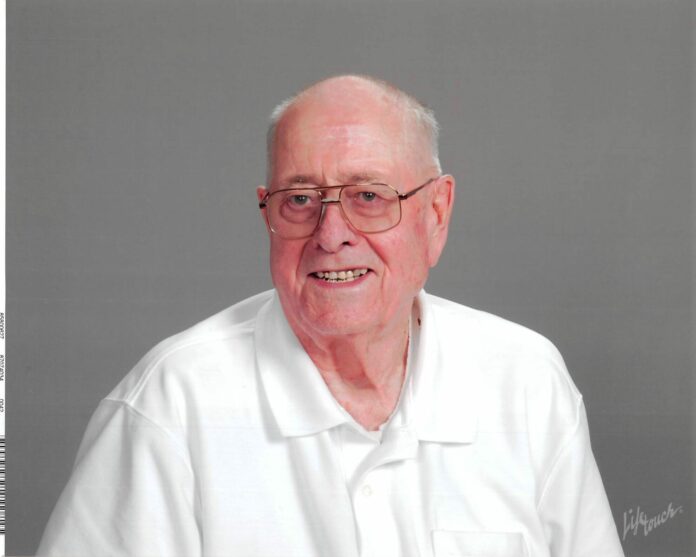 Educated in a one room schoolhouse and Prairie Du Chien High school graduating in 1944.

He and two young friends traveled to western Nebraska in 1948 for the wheat harvest. While his friends returned to Wisconsin, the dry western country appealed to him so he stayed to work for the Rabens (where he met his future wife) 4 miles outside of Crawford, Nebraska. The blizzard of 49 started in early January and they could not get a car into town until March. Welcome to the dry western country.

His military service was during the Korean war and as a natural born leader spent two years in Virginia as a drill instructor. He also was in the first group of troops to witness an atomic exercise near Las Vegas, Nevada in 1952. He was discharged in September 1952 with the rank of Sargant.

He worked various jobs and ended up in North East Wyoming in the oil field where his career began with Haliburton Services from 1954 to 1985.  Starting as a truck driver and progressing to District Manager of the Powder River Basin, a position he held the last 11 years of his career. His awards included 31 years of driving without an accident.

He married Elizabeth (Libby) Raben in 1958 at Chadron, Nebraska. They moved to Gillette and did an outstanding job of raising their two sons Robin and Brian.

Despite the long and unpredictable hours in the oil field Neal always made family and church his first priority, including the annual two-week vacation in the pop-up camper all over the western US. Neal and Libby continued camping for many years.

Since he was retired from his career and the boys were grown he diverted his energies to God, his community and every manor of volunteer work for the greater good.  He said, “it is amazing how much work can be done when no one is concerned about who gets the credit.”

As a member of the Presbyterian Church he served as Deacon, Elder, Trustee, taught Sunday School for many years, was involved in rural ministries, loved to do “words to live by” on the radio, was involved in Crop walk, and raised money to buy blankets for Church World Services.

He was an 18-gallon blood donor and organized blood drives for years. He and Libby received numerous awards including volunteer of the year, humanitarian of the year, 10 who made a difference and served weekly at the soup kitchen for over 20 years. His over 40 years of involvement with the Gideons included filling every office in the local camp and most of the offices at the state level and journeyed to Mexico City in 1989 to help distribute over 500,000 scriptures in two weeks, including schools, hospitals, and prisons.

He could be seen riding his bicycle around town well into his 70’s. Even after he decided to slow down a bit, he still had his regular circuit collecting stamps for charity and selling his famous “Neal’s Banana Bread” and leaving smiles on faces.

After 44 years the love of his life and partner Libby passed away in 2002. This left a huge hole but both he and Georgia Belecky found love again and giddy as teenagers started a wonderful life together in 2009. Sadly, Georgia passed in 2016.

Earning the respect of all, throughout every aspect of his life he was known for his honesty, integrity, ethics, compassion, and optimism with a great sense of humor.  In some way he had a positive impact on everyone.

He is preceded in death by Libby, Georgia, both parents, his sisters Leila Peterson, Ethel Lorenze, brothers Gaylord and Sherwood.  He is survived by his sons Robin of Gillette, Brian of Spearfish, numerous nieces and nephews, Liz Matti of Deadwood, special friend Georgeen Pierre of Gillette and countless people whose lives he has touched.

Cremation has taken place and a memorial service will be held October 26 at 10:30 at the First Presbyterian Church in Gillette. The cremains will be placed beside his wife Libby in Crawford, Nebraska with a service on October 28, 2021. The memorial service will be live streamed at www.gillettememorialchapel.com. In lieu of flowers donations may be made to Gideons International. Memorials and condolences may be sent in care of Gillette Memorial Chapel 210 West 5th Street, Gillette, WY 82716. Condolences may also be expressed at gillettememorialchapel.com.