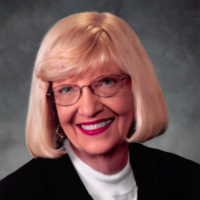 Carolyn was born August 9, 1935 to John and Alma Martin in Clinton, Oklahoma.  As a young teen the family moved to Buffalo, Wyoming where she spent several summers at HF Bar Ranch in Saddlestring, Wyoming riding horses and flirting with the cowboys.

On December 24, 1951 she eloped with Roy Shambaugh and was wed in Billings, Montana.  They had 3 children, Roy Neal, Debra and Susan.  The family moved several times in Wyoming and Colorado.  In the family’s ten year stay in Cody, Wyoming, Carolyn was very active in Beta Sigma Phi, a community-oriented sorority and taught briefly at an Episcopal day school in Rangley, Colorado.  After the family moved to Gillette in 1968, Carolyn worked the front desk at Campbell County High School and as a secretary for the Superintendent of Campbell County Schools.  Roy and Carolyn opened their first retail clothing store, Tots to Teens, 1973, followed by The Clothes Corner and Carolyn’s Dress Shop.  Carolyn was very active in promoting downtown Gillette businesses until Roy’s health forced them to close the business in 1993.  Carolyn started a new career in real estate until 1998 when she retired.

Carolyn was the first woman in the Gillette Lions Club where she served for many years, including as secretary/treasure of the Rocky Mountain Eye Bank sponsored by the Lions Clubs of Colorado and Wyoming.  Roy and Carolyn loved to travel and golf.  She was an avid reader, which she passed on to her three children.  Roy passed away in 1998.  In 1999 she married a longtime friend, George Kellam, in Las Vegas, Nevada.  They, too, enjoyed traveling and golfing.  George passed away in 2018.

As requested no services will be held.