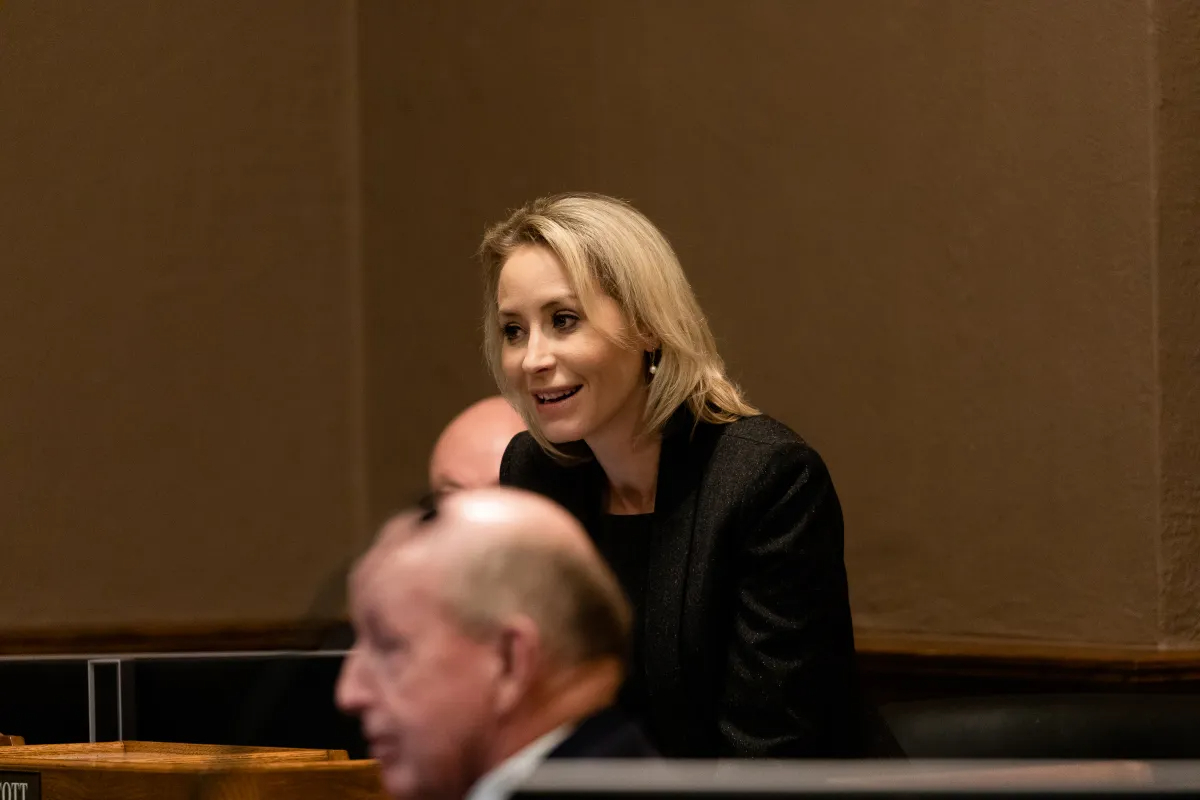 Bill criminalizing drone flights in the “immediate reaches” of private land, brought for the second consecutive session, has legislative momentum, though industry groups and the media warn of its ambiguity and vulnerability to litigation.

CHEYENNE—Sen. Tara Nethercott (R-Cheyenne) offered “a word to the wise” as she presented the history of a costly, court-stricken trespass statute her lawmaking forebears OK’d nearly a decade ago.

Nethercott, a practicing attorney, was testifying on Monday to the Senate Judiciary Committee she formerly chaired when she “urged great caution” to the five seated senators, none of whom are attorneys.

“I always made this caution to my members of the Judiciary Committee,” Nethercott said. “A federal court did find [this statute] to be unconstitutional and awarded attorney fees of over $650,000 to out-of-state lawyers just to demonstrate to the Wyoming Legislature that this is what happens when overzealousness concerning an issue results in an unconstitutional passage of law.”

The taxpayers of Wyoming paid that bill, she reminded fellow senators.

Sen. Bill Landen (R-Casper), the current Judiciary chair, absorbed the warning and offered back some levity: “I think that’s the first and only time that the state Senate has been wrong on something.”

In essence the bill scrubs state statute of language criminalizing data collection — like water quality samples or photos — on public land in instances where the data collector traveled across private land to get there. The 2014 law brought by Sen. Larry Hicks (R-Baggs) stemmed from a dust-up between Western Watersheds Project and Wyoming’s livestock lobby.  Four years later parts of the state statute were found to be unconstitutional, but not before garnering national publicity. (Disclosure: WyoFile reporter Angus M. Thuermer, Jr. was a witness in that lawsuit.)

Nethercott’s urging of restraint regarding constitutionally questionable statutes comes during a legislative session in which lawmakers are working a bevy of additional trespass bills. Included in the bunch are a couple — one prohibiting drones flights in the “immediate reaches” of private lands and the other, near prisons — that have at least one First Amendment attorney signaling that the state is again making itself vulnerable to litigation.

“You’ve got constitutionally suspect bills that would be better if you didn’t enact so we don’t end up having to challenge them in court,” National Press Photographers Association general counsel Mickey Osterreicher said.

The National Press Photographers Association, Wyoming Press Association and WyoFile raised freedom of the press concerns about two bills to the Wyoming Legislature’s Judiciary committees in a fall 2022 letter.

“It’s a whole lot cheaper and easier to write a letter than it is to bring a lawsuit, for everybody,” said Osterreicher, who wrote the missive. “They didn’t respond. I’m not surprised.”

Nethercott, who chaired Judiciary at the time, revisited the letter this week. She told WyoFile she wasn’t impressed by its threatening tone. The Wyoming press, she said, needs to do a better job of constructively representing their interests to the Legislature.

“No meaningful solutions were offered by the media, and I welcomed them — and I still do,” Nethercott said. “I’m asking for your comments other than this is unconstitutional and chilling.”

Fast forward to the Legislature’s general session and both bills — Senate File 34 – Trespass by small unmanned aircraft and Senate File 32 – Prohibiting drones over penal institutions — are moving steadily through the legislative process. Senate File 34 passed through the Landen-led Senate Judiciary Committee on a unanimous vote, and also cleared early floor votes. Its history feeds its chance of success: A prior version of the drone trespass bill, brought in the 66th Legislature’s 2022 budget session, was sponsored by Rep. Albert Sommers (R-Pinedale), now the speaker of the House, and Sen. Ogden Driskill (R-Devils Tower), now the Senate president. Senate File 32, meanwhile, has already cleared the Senate and awaits committee assignment in the House.

Drone regulation proponents in the Legislature recognize they’re wading into a murky realm of the law that’s still catching up with fast-evolving technology. Lawsuits likely loom, some senators suggested.

“This is a section of law, not unlike trespass, that will primarily be determined in the courts on a case-by-case basis,” Landen said on the Senate floor.

Yet, he said, “The bottom line … a violation of that airspace above my house, that is trespass.”

But parts of the draft drone bill aren’t legally clearcut. Its essence is detailed in a single sentence: “A person is guilty of trespass by small unmanned aircraft if the person causes a small unmanned aircraft to enter into the immediate reaches of the airspace over the private property of a landowner and the entry substantially interferes with the landowner’s or his authorized occupant’s use and enjoyment of the land.”

Lawmakers, lobbyists and other stakeholders have urged amendments to and shared concerns about several clauses in the sentence.

On the floor, Sen. John Kolb (R-Rock Springs) asked for a definition of “immediate reaches.” Sen. Stephan Pappas (R-Cheyenne), wondered what “substantially interferes” with the landowner’s “enjoyment of the land” meant, and who would be the arbiter of that.

“I can run a truck through any of these terms, and lawyers will,” she said.

While likely to be litigated, Nethercott also said the bill draft was crafted “carefully” and “thoughtfully” and was “in good shape.” In an interview, she said that she doesn’t believe the proposed statute is unconstitutional.

Industry groups, meanwhile, are pressing to tilt the drone bill’s language in their favor.

Wyoming Stock Growers Association and Wyoming Farm Bureau Federation lobbyists have asked to nix the word “substantially” from “substantially interferes with … enjoyment of the land,” so far to no avail.

Utility and insurance company lobbyists have sought an exemption for businesses flying drones for their own operations, like checking power lines or surveilling damage from natural disasters. Those requests, too, have been met with inaction so far as SF 34 moves along.

The press, however, has not been represented in Cheyenne as the drone bills have advanced. Former Wyoming Press Association executive director Jim Angell, who often filled the role of journalist advocate in the statehouse, died in August — and the Wyoming media lobby has been weakened ever since.

For newspapers and other media outlets across the country, drones have become an important part of the newsgathering process. Their routine use explains why Osterreicher, at the National Press Photographers Association, has challenged drone-related laws elsewhere, including Texas.

“We keep seeing these state and local laws popping up saying that you can’t fly below 400 feet,” Osterreicher said. “The FAA has said on a number of occasions that they control the national airspace from the blade of grass up to the heavens.”

That Texas case, decided in March, marked an initial victory for journalists’ right to use drones, though is being appealed by the state, he said.

Unmanned aircraft have become an important tool for newsgathering in Wyoming. Drones have been used for aerial perspectives on breaking news like when drive-in movie theater screens toppled in the wind, but they’ve also been employed for investigative journalism. The Jackson Hole News&Guide put the aerial tool to use to overfly a private luxury community on the banks of the Snake River, where developers were suspected of illegal floodplain work.

Cheyenne attorney Bruce Moats, an open government specialist who often represents Wyoming media, said he has not engaged with the developing drone bills.

Osterreicher hasn’t either, outside of his letter. Were he to lobby the Legislature, his message would be simple: “I would suggest that they just don’t come up with a bill like this,” Osterreicher said. The FAA, he said, already regulates drones, and “that’s pretty much all you need.”

Wyoming’s penal institution drone bill, SF 32, proposes photographing, surveilling or broadcasting prisons and correctional facilities be punishable by a misdemeanor that can result in a year in jail, a $2,000 fine, or both. Meanwhile, SF 34, the more general drone trespass bill, carries a $750.00 fine, up to 6 months imprisonment, or both.

Fighting charges are expensive the way a lot of state drone laws are written, Osterreicher said.

“Especially for newsgathering organizations, that kind of creates that chilling effect,” he said. “They’re going to go, ‘You know what, we’re not going to report on this.’ It’s pretty much like the case we brought with [the] Western Watersheds [Project].”

Osterreicher was alluding to his challenge of Wyoming’s 2014 data trespass law that was struck down in the U.S. District Court of Wyoming  prompting the current repeal bill.

The legislation ridding Wyoming statute of the unconstitutional provision is likewise sailing through the statehouse, though it met a couple of nay votes when it reached the Senate floor. One of those came from the original bill-bringer, Hicks, who explained his opposition to WyoFile.

“They ruled [collecting data] was a First Amendment right, and I don’t think that was right,” Hicks said.

U.S. District Court Judge Scott Skavdahl’s ruling concluded the statutes had been written to curtail free speech, specifically, “the collection of resource data relating to land or land use.”

“There is simply no plausible reason for the specific curtailment of speech in the statutes,” Skavdahl wrote, “beyond a clear attempt to punish individuals for engaging in protected speech that at least some find unpleasant.”

Hicks pointed out that two of the three provisions of the data trespass law prevailed in court and are still in Wyoming statute.

The likely soon-stricken statute specifically criminalized data collection on public lands after trespassing on private property to get there. The judge found, Hicks said, that there was already a law to address that — normal criminal trespass law.

Hicks’ perception is that Wyoming trespass laws are developing into a hot mess. There are yet more trespass-related bills moving through the Legislature just this session, including Senate File 56 – prohibiting travel across private land for hunting purposes.

“It’s a hodgepodge put together and I don’t know how anybody would know what the hell the trespass laws are in the state,” Hicks said. “You can see watching the debate down there, most of the members [of the Legislature], I don’t think they have a good grasp.”

Hicks was among senators who expressed concerns about drone trespass during floor discussion.

“What I don’t want to start doing is criminalizing every kid out there flying a drone over somebody’s property inadvertently,” he said.

Sen. Wendy Schuler (R-Evanston) explained that scenarios like this are why the Senate Judiciary Committee left “substantially” in the “substantially interferes” clause, shrugging off the livestock and agricultural lobby’s requests.

“But somebody’s got to pay for it to get sorted out in court. And somebody is the taxpayers and citizens of Wyoming.”

That language, of course, is open to interpretation. Terry Armitage, representing the Wyoming Association of Sheriffs and Chiefs of Police, said as much while testifying before the Senate Judiciary Committee. He asked for more specificity so sheriff’s deputies don’t have to decide what constitutes “substantial interference.”

“Who makes that call?” he said. “That’s tough, even to write a citation.”

If the statute language stands, those kinds of ambiguities could end up being unwrinkled in the courtroom.

“But somebody’s got to pay for it to get sorted out in court,” Osterreicher said. “And somebody is the taxpayers and citizens of Wyoming.”