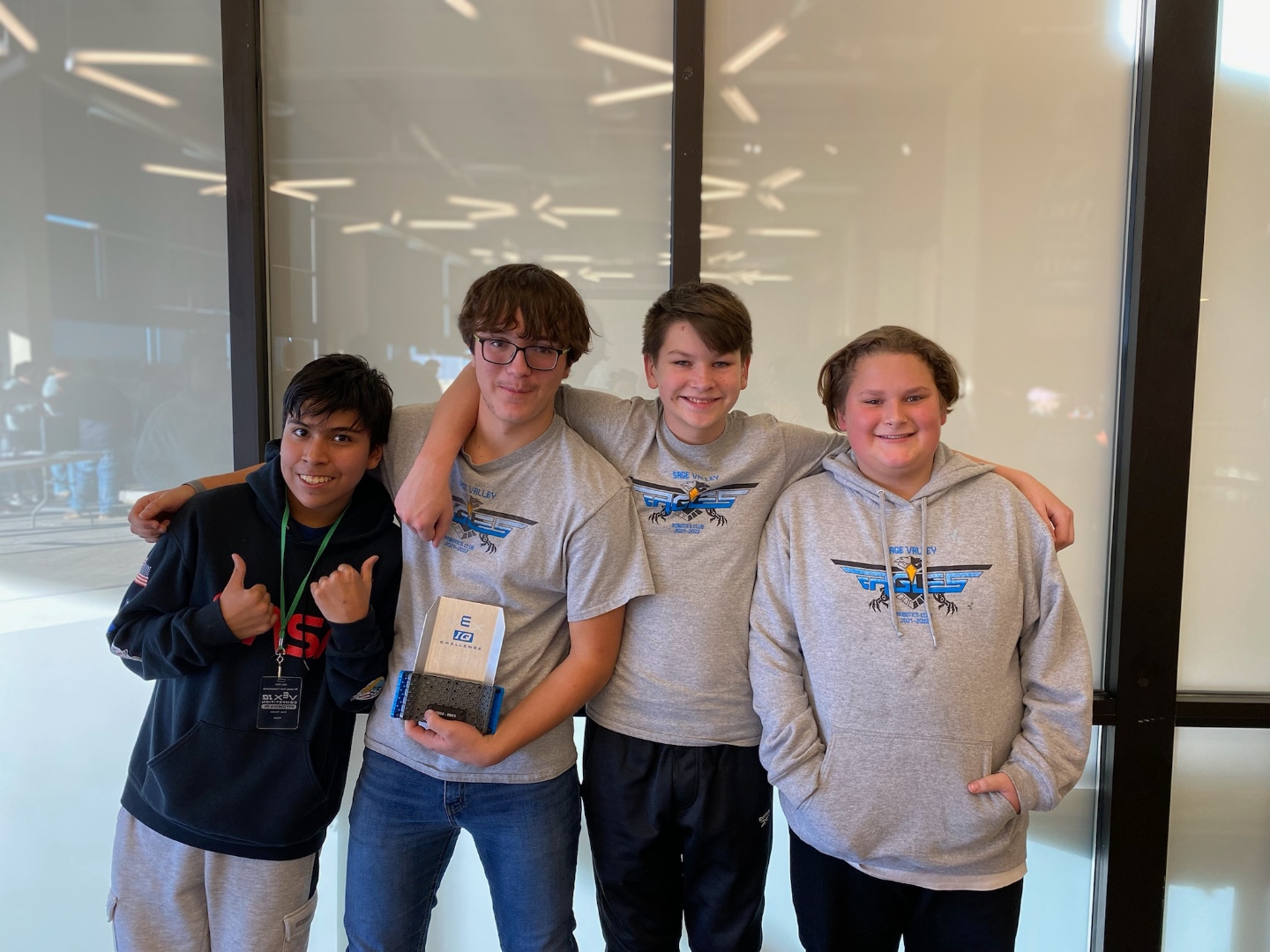 In just a couple of months, Campbell County School District will send several teams of students to compete in an international championship where they’ll compete with about 100 teams of their peers.

The Competitive Robotics Enhancing and Advancing Technology Education, or CREATE, Foundation invited 110 junior high teams and 90 elementary teams to its U. S. Open Robotics Championship, which will be held from March 20 to April 1 in Council Bluffs, Iowa.

A few teams of Sage Valley Junior High School students will be among the teams Wyoming is sending to Iowa for the Vex IQ Middle School Division tournament. Each invited team won at least one official Vex IQ event, and they’re all building their coding skills and developing their building engineering capabilities to make sure their team’s robot has what it takes to excel against the competition.

Caden Shear said that the robot the Golden Eagles developed is the team’s second model, as they wanted to make it stronger than their first.

Mason Kimberling said he enjoys building and playing the slapshot portion of the VEX IQ Competition Slapshot. He said he’s hoping to make it to the finals matches. He said the amount of adrenaline involved in competition is similar to that involved in playing sports.

Hunter Day said he enjoys team-building because even if there’s disagreement, they need to find a way to work together. Day said that some of his past experiences of having to work with a team were keenly difficult, but working with his robotics team helped him gain a new perspective. When the team enjoys success after having to learn patience and problem-solving, there’s a deeper feeling of accomplishment, he said.

“It’s really fun once you find the right teammates,” he said.

Day said he thinks getting involved in STEM activities like robotics can help him get a job in engineering or a similar role.

Gonzalez said he enjoys getting to hang out with his friends through robotics. He said that last year, Coffman introduced him to robotics and they had a lot of fun in the state competitions, so he decided to join the club again this year. He said he’s excited to explore Iowa, as his cousin said Iowa’s worth checking out.

Coffman said robotics is fun and he enjoys building a better robot and taking on a new Vex challenge each year.

Reynolds said he likes the “engineering-thinking” and he’s excited to go to the U.S. Open, even though their robot isn’t quite done.

“I’ve learned from this that I’m kind of a worrier,” he said.

He said his family has been really supportive. They’ve attended his tournaments and sent him videos about robotics.

“I think they love watching it as much as I love doing it,” he said.

Leisy said he’s looking forward to seeing and competing with the other robots at the U.S. Open. He said he enjoys the trial and error involved in building.

Springer said he enjoys the cooperation involved. As a two-person team, Springer’s taking the lead with coding for the robot while Leisy’s leading the building the robot.

While coding for the Vex robot is HTML, Springer also took Posten’s coding class, which included JavaScript. He’s starting to learn Python, too.

Posten also helps coach a team of elementary school students who qualified. His son, Kutter, is on the team. Posten said Kutter is a better builder than he is.

The students are raising $600 apiece to pay for the travel expenses since it will take about $7,500 to travel to the championship. They’re taking donations and selling Super Bowl squares. Posten said local businesses could call him if they’d like the students to make a pitch for donations.

Posten said the students have to be dedicated to robotics to learn most effectively, so he tries to hold practice after school three or four times a week. The students who are going to the U.S. Open have been coming mostly every practice, even though they only have to come twice a week.

He said he hopes robotics continues to grow in Wyoming.

Gillette robotics teams have a tournament from 11 a.m. to 3 p.m. Jan. 21 at Gillette College that’s open to the public.