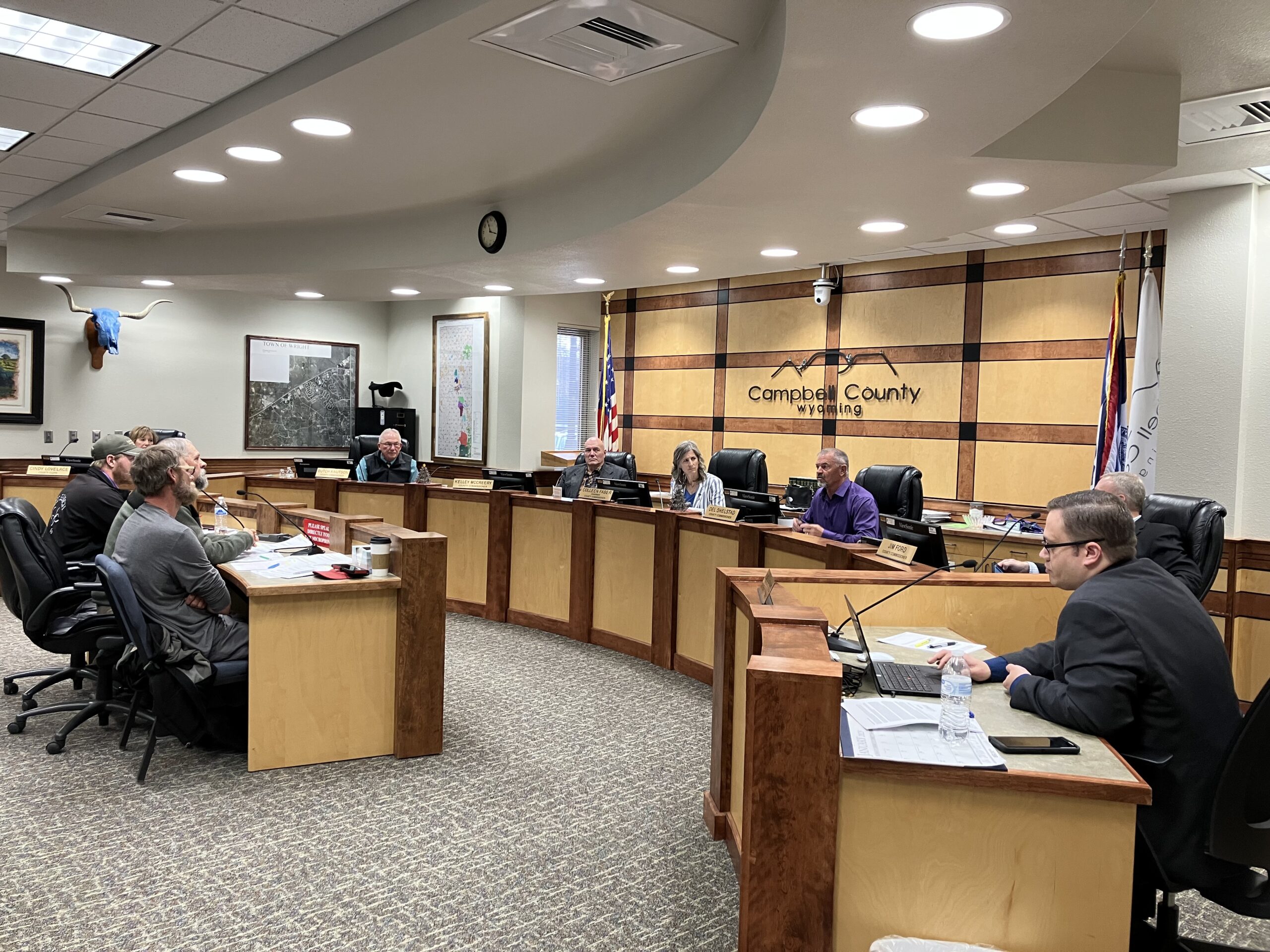 Commissioner Del Shelstad addresses the trio at the Jan. 17 Board of Commissioners meeting. (Mary Stroka/County 17)

GILLETTE, Wyo. — Campbell County Board of Commissioners is examining a petition from three Campbell County residents who say Wyoming has passed laws involving the Second Amendment that are unconstitutional.

In an hour-long workshop that began around 10:30 a.m. Jan. 17, Jacob Dalby, Larry Williamson and Bill Fortner had discussed with commissioners a petition that Williamson and Fortner first introduced during public comment at the commissioners’ Jan. 4 board meeting.

Commissioner Chair Colleen Faber said commissioners wanted the trio to have more time to explain their work and request.

In reference to your document “State & National Security Petition” presented to the Campbell County Board of Commissioners (Received 4 JAN 2023):

This email is to inform you that the Campbell County Commissioners will not deliver your petition to the State of Wyoming, Governor Gordon, nor the 67th Legislature on your behalf within 21 days as you demanded under threat of criminal prosecution if not done.

Your petition, signed (Citizens of the United States of America) by five citizens, states the following:

“We the people demand the Commissioners of Campbell County uphold their oath to the Constitution of the United States of America by delivering this petition within 21 days to the State of Wyoming, Governor Mark Gordon & the 67th Legislature for the repeal of the unconstitutional laws: HB0095, SF0102 and all referenced unconstitutional statutes.”

After legal review, we were unable to find any statute, rule, or regulation that would require any or all of the county commissioners to deliver a petition to the Wyoming State Legislature under threat of criminal prosecution, if they did not meet your delivery demand.  This is a matter for your WY legislative representative and you as constituents, if you believe the State of Wyoming is in violation the U.S. Constitution as identified in you petition.

Thank you all for your participation during the meeting’s Public Comments to voice your concerns to the Commission.

“[The email] represents the position of the Campbell County Commissioners on the issue,” Perkins said.

Dalby said there was no threat of criminal prosecution. He said they were only telling the commissioners that it would be perjury if the commissioners didn’t uphold the oath of office by raising the petition to legislators in Cheyenne.

“If it felt like we was threatening any of you guys, I want to apologize because that was never our intent,” Fortner said.

Fortner said that if the commissioners can determine that the petition is not a constitutional petition, they should abandon the petition.

Shelstad said Jan. 17 that he didn’t interpret what Williamson and Fortner said in public comment Jan. 4 as a threat.

“You guys were addressing us, as your government leaders, with a grievance,” Shelstad said. “The Constitution says that’s what you do.”

Shelstad said that after he received the email, he told Knapp that the board should engage with the trio in a workshop.

“It is [their] constitutional right to petition [their] local government. That’s what our Constitution is all about,” Shelstad said Jan. 6.

Shelstad told County 17 on Jan. 14, the day that County 17 learned of Knapp’s email, that he stood by the statements he made Jan. 6.

At the Jan. 17 workshop, Dalby said he previously took a COVID-19 petition to Gordon, and Gordon refused to accept it.

Dalby said at the workshop that Campbell County commissioners have more voice in the Wyoming legislature than he, Fortner and Williamson do.

Commissioner Jim Ford asked the trio to explain what they believe the County Board of Commissioners should do if another group of Campbell County constituents was to ask the board to advance a grievance that’s the opposite of the trio’s petition.

Shelstad asked whether the trio would find it acceptable for the board to email the petition to local legislators to save the taxpayers money. He said that the trio would be able to confirm through public records requests that legislators received it. Fortner said there needs to be accountability that reflects the level of accountability that would be involved in physically taking it to Cheyenne.

Faber said she believes the county needs more time to confirm that the trio’s interpretation of the Constitution is correct regarding the commissioners’ role in these circumstances. She said the trio should also be accountable as citizens of Wyoming, and that it’s important that the county doesn’t neglect the rest of its county duties in honoring the trio’s request.

Ferris said that the county will do the research and the due diligence to ensure that commissioners are fully informed of their obligations as commissioners in relation to the petition.

Correction, Jan. 20: Dalby texted County 17 and said that the petition he took to Gordon was about the COVID-19 mandates, not the Second Amendment petition that the trio presented Jan. 4 and Jan. 17. The story has been corrected.

Clarification, Jan. 20: Dalby texted County 17 and said that Gordon said he had to present the COVID-19 petition to the attorney general.