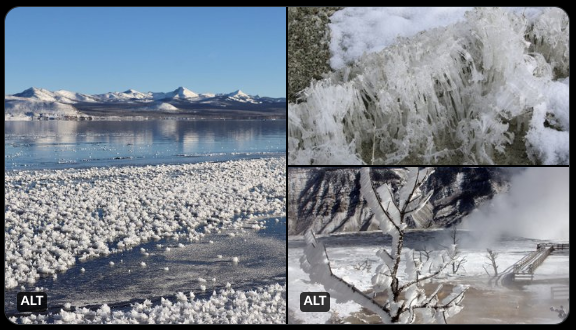 CASPER, Wyo. — Yellowstone National Park is a well-known photography heaven for nature and camera lovers, and it does not disappoint even in the dead of winter.

Yellowstone took to Twitter on Wednesday to share pictures of unique ice formations found throughout the park. Wind, moisture and freezing temperatures worked together to form dazzling and interesting works of ice.

Among those is hoarfrost, a grayish-white crystalline ice formation made of frozen water vapor. It’s feathery in appearance. The Woodland Trust says the word “hoar” is derived from Old English and refers to the old-age appearance of the frost since the crystals can look like white hair or a white beard.

Rime ice is another ice formation that was found in Yellowstone. It’s formed when supercooled water droplets freeze onto a surface, according to Wikipedia. The process of crystal growth is called accretion and is most often seen as a result of fog in a freezing cold environment.

Needle ice was the third formation shared by Yellowstone National Park on Wednesday. Needle ice is, as the name suggests, a needle-shaped column of ice formed by groundwater. It forms in porous, water-saturated soils where the water freezes faster than the soil. The expansion of the ice in the soil pushes it up into the column.