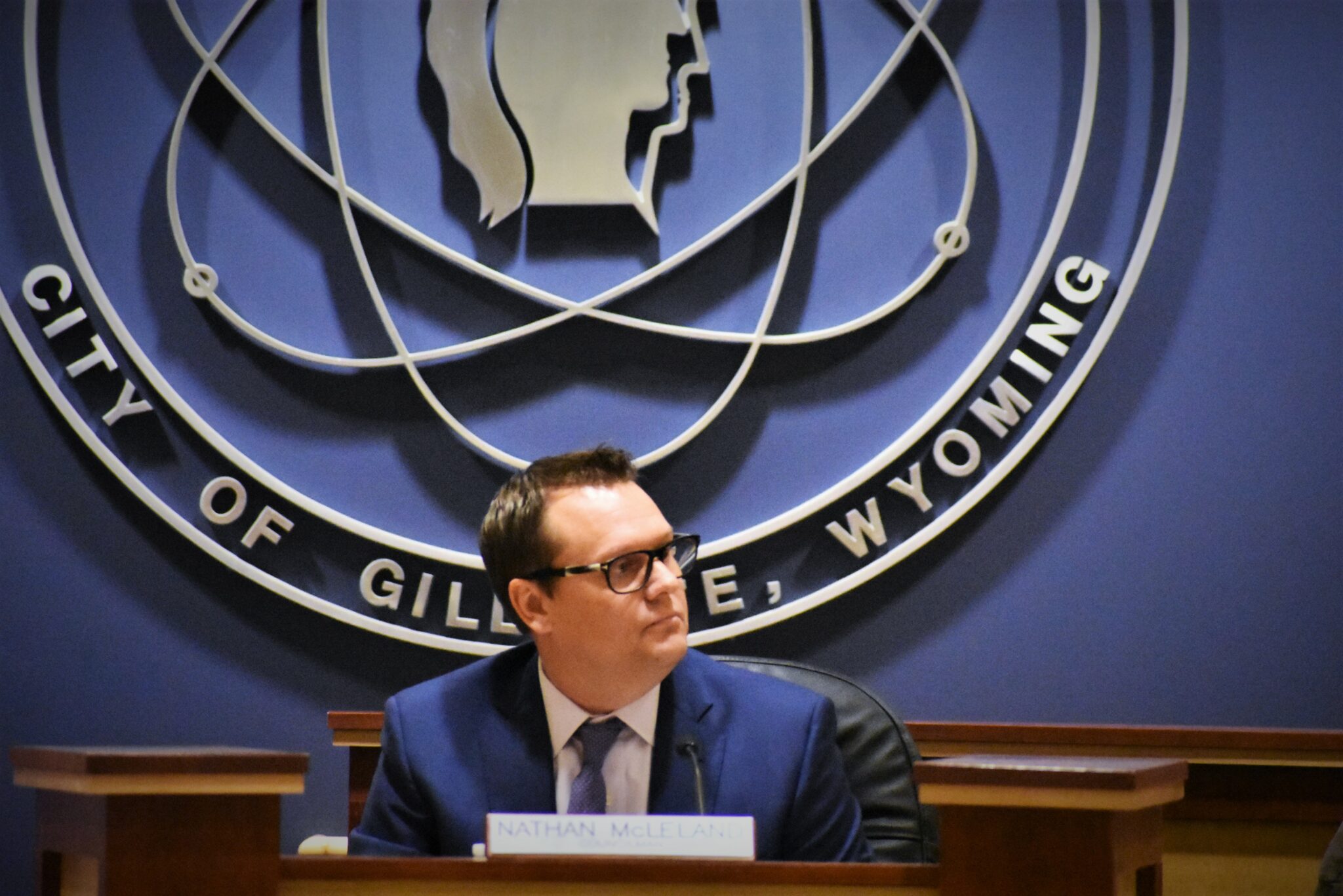 Nathan McLeland presides over a special council meeting on Jan. 6 during his temporary role as Gillette mayor to discuss the appointment of a permanent Mayor of the City of Gillette. (Ryan Lewallen/County 17)

GILLETTE, Wyo. – Nathan McLeland has been selected to serve as the second representative of Ward 3 on the Gillette City Council.

The decision came during a council meeting on Jan. 17, a meeting that ran long into the night before he was ultimately selected from among eight applicants who put their names in as candidates to represent Ward 3 alongside Councilmember Heidi Gross.

McLeland opted not to run for re-election as a Ward 3 representative during the 2022 election, choosing instead to run head-to-head against Mayor Shay Lundvall for his office where McLeland was defeated by only a few hundred votes.

McLeland and applicant Ernie Gibson were the only candidates to receive verbal nominations from the council following the interview process, which said they both had the best answers to the questions posed to all applicants during the meeting.

Two rounds of votes regarding the seat ended in a tie, with half of the council including Lundvall voting for Gibson and the other half voting for McLeland. The decision was made after Councilmember Tim Carsrud, who during the first two rounds supported Gibson’s appointment, cast a deciding vote in support of McLeland during the third.

Prior to his final vote, Carsrud said he, like other members of the council, had received multiple communications from residents of Ward 3 and while a few were in support of Gibson, the overwhelming majority were in favor of McLeland.

Carsrud said that whoever fills the vacant seat would need to be the best person for the job and someone who would accept and further the vision expressed by Lundvall for Gillette’s future.

McLeland also garnered support from Gross as well as Councilmembers Jim West and Billy Montgomery, all of whom said that McLeland’s experience on the council and as council president during his time made him the most qualified person for the job.

West said that the council was at a tough crossroads and asked the council to consider everything they wish to accomplish by mid-year. He pointed out that McLeland was well-received while serving on the council and ran a close race that showed how much the people of Gillette supported him.

He said that the results of the election and McLeland putting his name in the hat for the seat showcased his character in a positive light for his willingness to continue to serve the people of Gillette, a statement to which Gross agreed.

“McLeland’s dedication to the community is pretty apparent,” she said, and that it takes a big person to lose an election and still have the desire to serve. “I commend you, (McLeland), for that. That speaks very loudly to his character and his service to this community.”

She said the council needs seasoned leadership to meet their goal of moving Gillette forward and McLeland, who has extensive board experience outside of the council, made him the best choice.

McLeland, Gross said, would be able to jump right in without the need to go through any sort of orientation like a new council member would.

Montgomery said that McLeland’s experience on the council and his proven drive to dedicate the necessary time to do the job of a city council member made him, in his eyes, the ideal candidate.

With McLeland’s experience, according to Montgomery, there wouldn’t be a learning curve like with newer council members before he could do the job, especially when it came to the mayor’s vision.

“I think (McLeland) is what we need to meet goals and move forward and do the rebuilding you talked about,” Montgomery told Lundvall.

Lundvall, following the vote in favor of McLeland, thanked him and Gibson for putting their names forward in a process that isn’t easy on them or on the council and that McLeland’s appointment is what the people wanted.

The mayor said he’s appreciative of that process and that he’s excited to work with McLeland during the next two years.

“Let’s get to work,” Lundvall said.