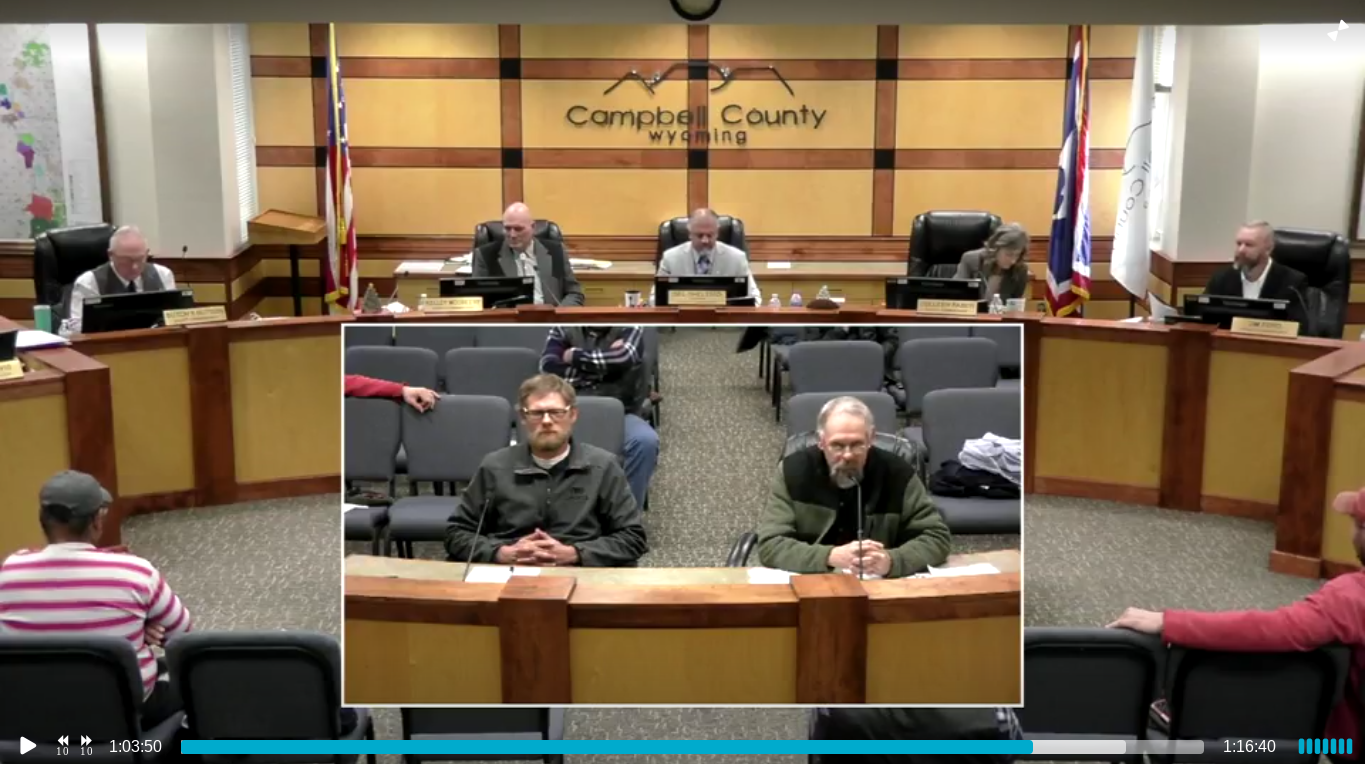 Larry Williamson (left) and Bill Fortner present a petition Jan. 4 to the Campbell County Board of Commissioners. (GPA-TV)

GILLETTE, Wyo. — Gillette residents Jacob Dalby and Bill Fortner will address the Campbell County Board of Commissioners toward the end of the board’s Jan. 17 meeting to inform them regarding their responsibility to deliver constituents’ petitions to state legislators, Fortner said Jan. 14.

“We feel the need to educate them,” Fortner said.

As of 12:08 p.m. Jan. 14, the agenda for the Jan. 17 meeting hasn’t been posted on the Campbell County website. The link to the Jan. 17 Commissioners Meeting agenda leads to the Jan. 4 meeting’s agenda.

During public comment at the Jan. 4 meeting, Fortner and Larry Williamson presented the following petition:

“Therefore; The State of Wyoming by virtue of her governing bodies are and have been in collusion with the Federal Government and Judicial System to usurp the rights reserved to the people [Amendment IX (9)] of the United States of America via enforcement of powers not enumerated to the United States nor to the States [Amendment X (10)]. Whereas; HB0095 Wyoming Firearms Freedom Act (2010) & SF0102 Second Amendment Protection Act (2022) are unconstitutional per the Constitution of the United States of America Article IV (4) Section II (2), Amendment II (2), Amendment IX (9), Amendment XIV (14) Section I (1) and blatant in contradiction to the intentions established by the Founding Fathers. [Quote] “On every question of construction (of the Constitution) let us carry ourselves back to the time when the Constitution was adopted, recollect the spirit manifested in the debates, and instead of trying what meaning may be squeezed out of the text, or invented against it, conform to the probable one in which it was passed.” (Thomas Jefferson, letter to William Johnson, June 12, 1823). [Court Precedent] New York State Rifle & Pistol Association Inc v. Bruen (2022) that under the Second Amendment of the U.S. Constitution, the government cannot restrict the right to possess firearms unless the restriction is consistent with historical tradition.

“Whereas: The Founding Fathers intentions and the Constitution of the United States of America has been misconstrued and/or blatantly distorted to disarm the people and disband the militia of the several states of a force capable of projecting military force against standing armies foreign or domestic. [Quote] “Before a standing army can rule, the people must be disarmed; as they are in almost every kingdom of Europe. The supreme power in America cannot enforce unjust laws by the sword; because the whole body of the people are armed, and constitute a force superior to any bands of regular troops that can be, on any pretense, raised in the United States. A military force, at the command of Congress, can execute no laws, but such as the people perceive to be just and constitutional; for they will possess the power, and jealousy will instantly inspire the inclination, to resist the execution of a law which appears to them unjust and oppressive. ” (Noah Webster, “An Examination into the Leading Principles of the Federal Constitution,” 1787) Whereas; HB0095 restricts the weapons and ammunition required to support a functional militia and/or defense against standing armies [Court Precedent] United States v. Miller (1939) whether the arm “at this time” is “ordinary military equipment” or its use “could” potentially assist in the common defense. SF0102 willingly surrenders Amendment X (10) directly in conflict with Amendment IX (9) stripping the power of the people, expanding beyond enumeration the power of the Federal Government. Although SF0102 cites Printz v. United States there is no evidence the State of Wyoming has been coerced nor commandeered in her acceptance of federal funding or willingness to assist federal agencies. This endangers the rights of the citizens of Wyoming to the Bi-Partisan Safer Communities Act, HR1808 as well as any current or future unconstitutional acts, executive orders, rules or laws that infringe on the Constitution of the United States Amendment II (2). Thus; We the people demand the Commissioners of Campbell County uphold their oath to the Constitution of the United States of America by delivering this petition within 21 days to the State of Wyoming, Governor Mark Gordon & the 67th Legislature for the repeal of the unconstitutional laws; HB0095, SF0102 and all referenced unconstitutional statutes.”

“Our goal is to educate the people on the United States Constitution so they are aware of their rights,” Williamson told County 17. “We also encourage the ratification Debates to be read for clarity on what the founders intentions were.”

SF0102, the Second Amendment Protection Act, according to Wyoming’s Legislative Service Office’s summary, does the following:

“SF0102 makes clear it will not prohibit federal funds putting Wyoming endanger of enforcement of unconstitutional gun control via the Spending Clause allowing the federal government to expand beyond its enumerated powers. Any expansion of federal authority takes away from the rights of the people,” Williamson said. “The Second Amendment can not be improved by law, only restricted.”

SF0102, the Wyoming Firearms Freedom Act, according to Wyoming’s Legislative Service Office’s summary, does the following:

Williamson and Fortner asked the board to hand-deliver the petition to Cheyenne.

The Board of Commissioners’ full Jan. 17 agenda is below: