James “Jim” Beam, 83, passed away at his home on May 10, 2022, in Gillette. Jim was born on May 11, 1939 in Olathe, KS to Roy and Lois Beam. He was one of 4 boys. Jim graduated from Mulberry High School in 1956. He and his brothers joined the air force after high school where they served 4 years before leaving. Jim met the love of his life, Peggy, when they were young and got married soon after and shared 63 wonderful years of marriage together. They have one son, Scott, and they lived most of their lives in Kansas until moving to Wyoming in the early 1990’s where Jim worked as a Federal Coal Mine inspector for many years until his retirement. In his retirement, Jim and Peggy traveled, enjoying many trips to Las Vegas with their friends and family, and loved going on Alaskan cruises any chance they could. Jim was loved very much by his family and will be missed dearly. He was the best father and grandfather anyone could have. Jim is preceded in death by his wife, Peggy and his father and mother, Roy and Lois Beam. Jim is survived by his son Scott (Kathy) Beam; grandkids: Rob (Bobie) Morris of North Pole, Alaska; Amy (Mark) Naus of Sheridan, and Josh (Savannah) Beam of Gillette.  Jim has 8 great grandkids; Justin, Haley and Riley of North Pole, AK; Kincade and Vincent Naus of Sheridan; and Wyatt, Ella and Everleigh Beam of Gillette.  Memorials and condolences may be sent in care of Gillette Memorial Chapel, 210 West 5th Street, Gillette, WY 82716. Condolences may also be expressed at www.gillettememorialchapel.com 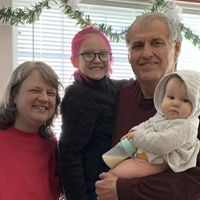 After battling cancer for a length of time, Connie Ruth Thompson, 59, passed peacefully out of this life and into the arms of Jesus, on May 11, 2022. She was surrounded by loved ones.

She was born to Dale and Janice (Decker) Belden on February 26, 1963, in Laramie, WY. She lived in Laramie until she was two years old when her parents moved to Cheyenne, WY in 1965. In 1969, they moved to Casper, WY. Connie graduated from Riverview Baptist High School in 1981. She was salutatorian and graduated one semester early.

Connie worked at Coast to Coast Hardware Store during her school years. She was later employed by Guaranty Federal Savings & Loan and saved her money to go to Israel, her most fond desire, rather than attending college. She then worked for NCSE (Reliant) Federal Credit Union for five years as a loan officer.

Connie married Thomas Thompson on February 19, 1983. He pursued his career as a Journeyman Electrician in Casper. In 1990, Connie gave birth to their first son, Lane. In 1992, Tom took a position as an electrician at Jacob’s Ranch Coal Mine and they relocated to Wright, WY. In 1993, their second son, Seth, was born.

Connie and Tom chose to homeschool their boys, and both Lane and Seth graduated from Christian Liberty Academy School System. Connie enjoyed teaching and learning alongside her boys.

Connie was a loving wife, mother, grandmother, daughter, sister, aunt, and friend. She was a true Proverbs 31 woman of the Bible. She touched many people in her life, and always had a smile and a kind word for strangers who would pour out their hearts to her anywhere she might meet them. She most enjoyed spending time with her family, especially her two granddaughters, the brightest spots of her heart and life.

Connie was grateful for all the opportunities and blessings God gave her and her family. She knew the supreme joy of her death is to enter Heaven and be received by Jesus, her savior, the Son of God. She would want all those who loved her to know the same comfort.

Connie was preceded in death by her Father, Dale Belden, grandparents Belden and Decker, and niece, Ana Belden.

She is survived by her husband, Thomas Thompson, sons Lane and Seth (Corrine) Thompson, granddaughters Lilly and Theodora, her mother, Janice Belden, and brother Scott (Jonni) Belden, and many aunts, uncles, nieces, nephews, and cousins.

To honor Connie’s wishes, a graveside service will be held for close family in Wheatland, WY, where her grandmother and grandfather Belden are buried.