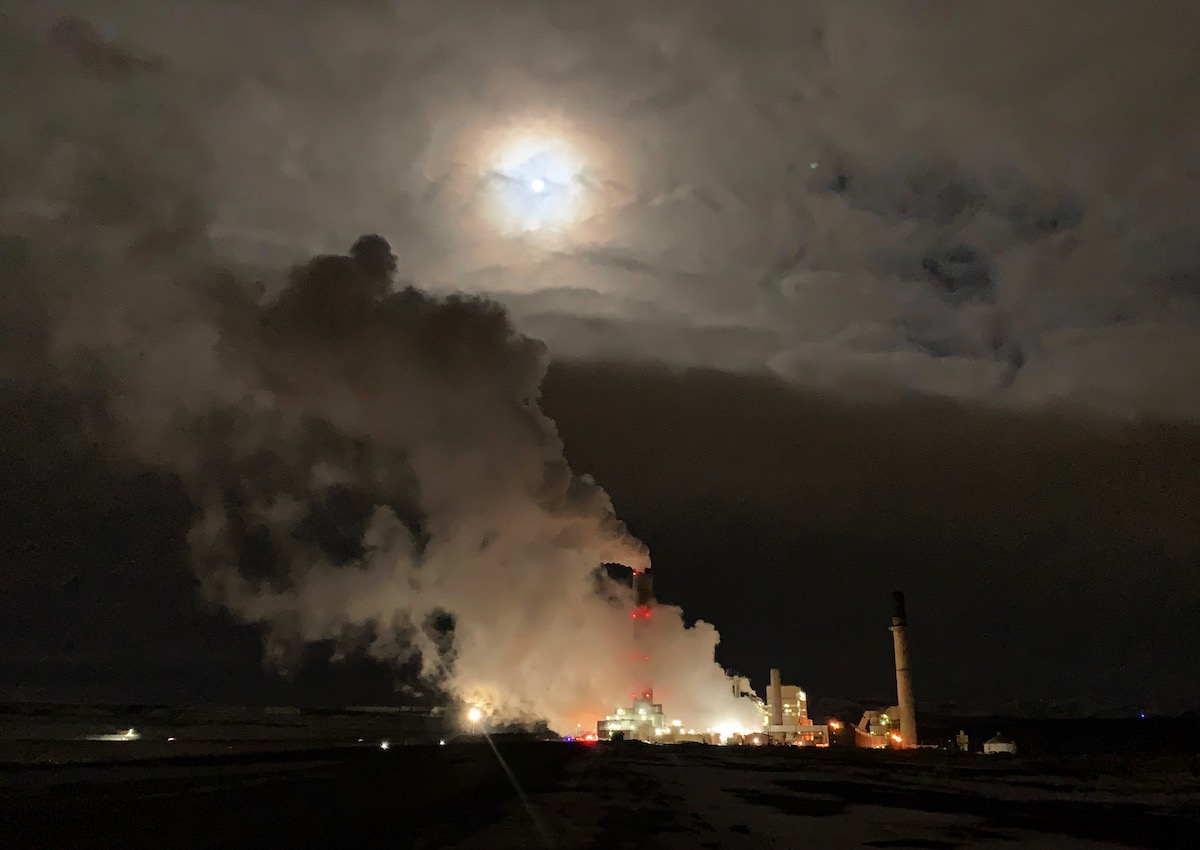 The Naughton coal-fired power plant, pictured Jan. 19, 2022, will be retired in 2028 when TerraPower commences operations for its proposed Natrium nuclear reactor power plant at the same location. (Dustin Bleizeffer/WyoFile)

Bill Gates’ TerraPower, joined by GE Hitachi, Rocky Mountain Power and other corporate partners, and by the U.S. Department of Energy, Sen. John Barrasso and Gov. Mark Gordon, are eager to build a small nuclear power plant outside of Kemmerer. House Bill 131 – Nuclear power generation and storage-amendments passed in the recent legislative session, removing some statutory obstacles, but there are other regulatory hurdles to cross, and several years ahead for construction and final licensing. It’s not too late to question this plan and whether Wyoming should allow it.

The Natrium reactor would be a demonstration plant with a power output to the grid of about 345 megawatts, about one-third to one-half the output of one of Wyoming’s larger coal plants. It’s an experiment with little direct value for Wyoming, beyond about 2,000 short-term jobs in construction and perhaps 500 permanent positions if the plant becomes operational — a fraction of the jobs we’ve lost due to the Biden administration’s war on fossil fuels.

I have several concerns, based on my background and education in the field of nuclear safeguards and security. Although my 30 years of work with the Department of Energy was not directly involved with civilian nuclear power, it leads me to conclude, as an educated layman, that some of the promises of safety, security and economic viability that TerraPower and its supporters offer regarding the Natrium plant are not well-founded.

I explored these concerns recently in an email exchange with Jeff Navin, TerraPower’s director of external affairs.

Let me be clear: I am not “anti-nuclear” at all. I believe that nuclear weapons have kept us alive and free for the last 75 years, and that some form of nuclear power will be a large part of the solution to our uncertain energy future. However, neither the 93 light-water reactors that currently provide 20% of our electricity, nor the not-so-very-new Natrium technology are that solution. There are structural problems with commercial nuclear power in the United States that apply to the Natrium project.

We would not even have a commercial nuclear power industry in America without massive and continuing federal subsidies.

First of these is the ongoing research and development that began in the 1940s, and continues, for just one example, in the government’s commitment of $2 billion of taxpayer money to the Natrium project over the next seven years.

The second federal subsidy for nuclear power is its acceptance of the risk of catastrophic accidents. Since the 1950s, the federal government has capped the potential liability of nuclear power plant operators, promising to pay any additional costs with taxpayer funds. That cap started at $150 million in 1957 and is now at $10 billion, which sounds like a lot until you consider that estimates of the total cost of the 2011 Fukushima nuclear disaster in Japan lie between $250 and $500 billion.

The third federal subsidy for nuclear power is the government’s promise that it would provide safe and secure storage of the highly radioactive, thermally hot, chemically toxic spent fuel periodically removed from reactors, at no cost to the operators. Sixty-five years later, there is still no permanent repository. The operators of every nuclear power plant store their spent nuclear fuel on site, supported to date by over $9 billion in taxpayer money.

Critics of the renewable energy sector — wind and solar — often point out that renewables are not competitive in the energy market without massive federal subsidies. Why does nuclear get a pass? It is an industry that has never paid its own way, and the electricity it produces would be unaffordable if the industry had to pay for its own liability insurance, its own waste disposal, and its original and ongoing R&D costs.

My first safety concern is the molten sodium coolant. It’s not a new concept. Governments have built many sodium-cooled experimental reactors over the years; most of them have been shut down due to their recurring problems. Molten sodium reacts with water to produce hydrogen, which can burn explosively in contact with air. Leaking molten sodium itself burns in contact with air or water. TerraPower promises that its design will be safer than previous sodium-cooled experimental reactors. But one such reactor reported 27 leaks in a 17-year period, 14 of which resulted in sodium fires, according to the International Panel on Fissile Materials.

These safety issues do not even arise in the water-cooled commercial power reactors in service in the U.S. since the late 1950s. The safety record of those older reactors is often cited by proponents of nuclear power, but it is no assurance of the safety of the sodium-cooled Natrium reactor.

TerraPower’s spokesman assured me that the company does not intend to store its spent reactor fuel on-site permanently. But it won’t have a choice. The promised safe and secure permanent repository does not exist, and no breakthrough is on the horizon.

When spent fuel elements are first removed from a reactor, they are still undergoing rapid nuclear decay. They are highly radioactive and very hot, and are stored in pools of water with only a small fraction of the shielding and physical protection provided by massive reactor containment structures. Pumps circulate cooling water so that they will not burst into flame or generate hydrogen or steam explosions scattering radioactivity downwind, as happened at Fukushima when the electric pumps failed and backup emergency pumps ran out of diesel fuel.

Beyond a systems failure or natural disaster, there is the threat of hostile action. In my own career in the field of nuclear safeguards and security, I saw risk assessments that recognized the attractiveness of spent fuel storage to hostile actors like terrorists, insider threats or foreign enemies. Disable the cooling pumps or their control systems, and you get the “Mother of All Dirty Bombs” — far more easily than any direct action against a reactor. Protecting against that threat is not impossible, but it is costly and uncertain.

Mr. Navin points out that such a catastrophe has never happened in the United States. It had never happened in Japan either, until 2011. It is what risk managers call a low-probability, high-consequence event. Those flinty-eyed insurance actuaries from Lloyds and other high-risk underwriters understand these risks quite well.

Wyomingites may be willing to accept the associated risks, but they should do so with their eyes wide open, and not settle for a bland assurance that “it can’t happen here.”

My third safety and security concern has to do with the nature of the Natrium reactor itself. It is a “fast reactor,” which refers to the heavy neutron flux generated by its more highly enriched uranium fuel. Such reactors can be used as “breeders,” meaning that you can wrap the reactor core in a blanket of Uranium 238, where the neutron bombardment transforms it into Plutonium 239, which can then be used for reactor fuel — or nuclear weapons. This is financially attractive, because it makes something out of nothing: allowing the otherwise useless 99% of naturally occurring uranium to be transformed into usable fuel. However, the U.S. has forbidden the building and operation of breeder reactors from 1977 to the present, because of their potential for nuclear weapons proliferation.

TerraPower is excited about its chances of selling Natrium reactor technology not just in the U.S. but internationally. Although Mr. Navin assured me that TerraPower would not exploit the “breeder” potential of the Natrium demonstration reactor in Wyoming, would future international customers resist the temptation? TerraPower can’t say, and we can’t know. Mr. Navin offered assurances that the International Atomic Energy Agency monitors this sort of activity, but the IAEA has no enforcement capability, and only inspects foreign facilities if the host nation invites it; the agency only “keeps honest people honest.” Does Wyoming want the legacy of being the test-bed of a nuclear technology that could increase the dangers of nuclear weapon proliferation worldwide?

HALEU – a question of definitions and potentials

By the way, this is where the “Russian uranium” controversy comes in. It’s not about Russian uranium, actually; it’s that, at this time, only Russia has a production-scale plant capable of fabricating the HALEU fuel assemblies that Natrium requires. Given the current opposition to Russia’s invasion of Ukraine, and the long-term uncertainty about its reliability as a supplier, it’s fair to accept TerraPower’s assurance that it is trying hard, with both Bill Gates’ money and our taxes, to encourage development of a similar fuel fabrication facility in the USA — or at least in some friendlier or more stable foreign nation.

Here’s the real problem with the HALEU fuel. TerraPower’s public relations campaign says that HALEU is uranium enriched to “between 5% and 20%.” That kind of imprecision in nuclear technology is unusual. Five percent enrichment is standard for light-water reactor fuel. Twenty percent and above is considered “highly-enriched” uranium, which means it is potentially usable as a nuclear explosive. It’s not optimum; 80% or higher levels of enrichment are preferred for use in weapons. To build a weapon of 20% enriched uranium would require a great deal more uranium, which would be expensive, heavy and inefficient. No one would want to do such a thing, except perhaps someone who wanted a nuclear explosive and did not particularly care about efficiency or elegance of design.

I therefore asked Mr. Navin of TerraPower if he could narrow that 5%-20% range a little bit, and he confirmed to me that the Natrium’s HALEU fuel actually uses 19% enriched uranium. One silly percentage point below the enrichment level that could be utilized in a nuclear explosive.

The question is not just whether 20% is weapons-grade, which Mr. Navin denies, but my education and a great deal of unclassified, published analysis confirms. It may not be possible to produce a weapon directly from the Natrium’s HALEU fuel, but it is generally acknowledged that the amount of time, effort, energy and technical sophistication required to enrich uranium from 20% to 90% U-235 is a small fraction of what it takes to enrich from the natural level of 0.3% to 20%.

This means that if you cannot figure out how to create a bomb from 20% enriched uranium, because you don’t know how to navigate the internet or read a book, it still would be a terrific shortcut to get to the higher enrichment levels that have no other use than in nuclear explosives. We have spent years and billions of dollars and massive political capital trying to keep Iran from enriching to 20% because we know how close that puts them to building nuclear weapons.

This, in turn, means that HALEU fuel would require a level of security comparable to what we provide for nuclear weapons, from the point of its enrichment and fabrication (whether in Russia or elsewhere) through the entire chain of handling, transportation, cross-shipment, storage and delivery to the Natrium plant. I know first-hand what those requirements are, and they are neither cheap nor easy to meet. Maybe it’s not a serious concern, though: our taxes and utility bills will cover it.

There are other, truly innovative nuclear technologies in the experimental stage that could avoid the many drawbacks of Natrium. If you’re a devotee of Greta Thunberg and believe that the end of the world is coming in less than 12 years if we don’t end fossil fuel use right now — crashing the global economy and human population in the process — then you may think these risks are worthwhile. If you take a more measured approach to the challenges of climate change and resource depletion, maybe it’s time to discourage this rush into a risky, uneconomical and unrewarding technology in our own backyard.