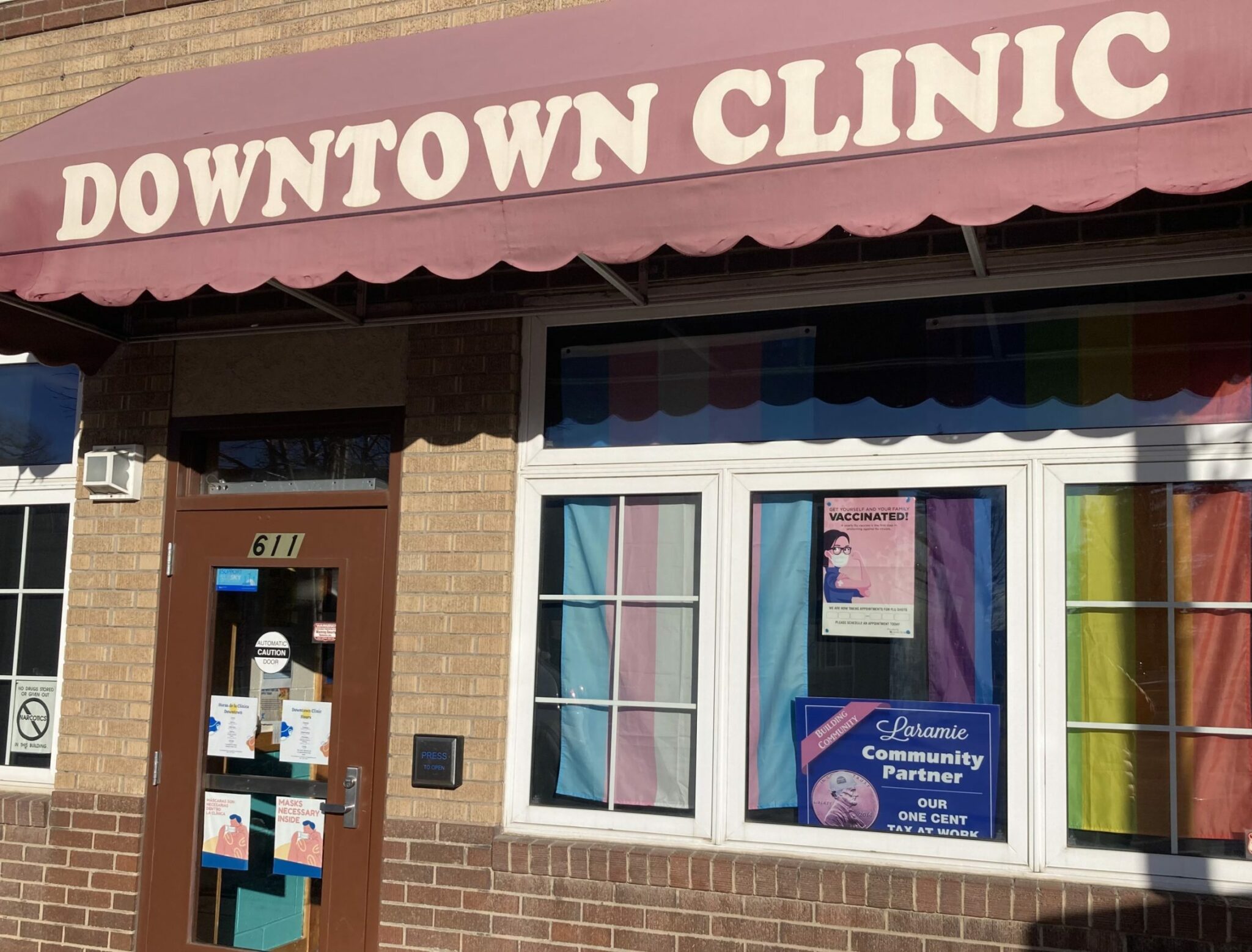 The Transgender Pride Flag in the window of the Downtown Clinic in Laramie. (Tennessee Watson/WyoFile)

Bills can travel a fascinating journey from conception to debate on the floor of the Wyoming Legislature. Sometimes it can be a miserable trip with harmful consequences.

Sen. Wendy Schuler (R-Evanston) said she decided to sponsor SF 51 after talking to a Wyoming mother who was upset because her daughter — who is in another state — may drop out of sports after being badly defeated in a track event by a transgender student.

Testifying to the Senate Education Committee, Schuler didn’t offer any evidence that unfair competition caused by transgender student athletes is a problem in Wyoming. Nor, she admitted to the committee, did she speak to a single trans student who would be affected if her bill becomes law.

The senator also acknowledged that when she filed the measure, she didn’t know the Wyoming High School Activities Association established a policy eight years ago that handles gender identity issues, including sports, at the local school district level.

Armed with that new knowledge, why not withdraw the bill and find out if it’s even necessary? Why the rush to pass a measure that, as several people testified, would have a negative impact on trans students’ lives and put the state at risk of being sued?

Because, like so many “red meat” bills — the preferred legislative diet of many Wyoming lawmakers — necessary, just and legally defensible were never legitimate considerations.  Senate File 51 is only here because transgender inclusion is among this year’s batch of red-state-legislature hot issues. Schuler noted that 31 states have either passed bills similar to hers or are considering them.

It’s a great way for Republican legislators to show their disdain for President Joe Biden  who, on his second day in office, signed an executive order protecting the rights of transgender athletes in high schools and colleges. His action reversed the anti-trans policies of former President Donald Trump.

Ironically, SF 51 supporters and critics both cited Title IX, a federal civil rights law that prohibits sex-based discrimination in any school or other education program that receives federal funding.

Schuler was a student athlete when the law was passed in 1972. When her playing days were over, she became a coach.

“We fought hard to give girls and women the chance to compete,” she recalled. “I was one of those sitting on the sidelines, watching my cousins and brothers compete.”

But Sabrina King of ACLU-Wyoming said Title IX became law because girls’ sports were woefully underfunded compared with boys’ athletic programs, not due to unfair competition between genders.

Courts throughout the nation recognize that trans women have the right to equal protection under the law. “That’s not up for debate,” King said, adding that SF 51 would jeopardize Wyoming’s Title IX federal funds.

The bill, King said, violates both the Equal Protection Clause of the Fourteenth Amendment to the U.S. Constitution and a similar provision in the Wyoming Constitution, and will open the state up to lawsuits. Schuler contested that assessment.

If anyone was looking to newly appointed Superintendent of Public Instruction Brian Schroeder for clarity, forget it.

Although SF 51 only applies to transgender girls who want to compete in female sports, the superintendent seemed fixated on girls who “go through a period where they hate their bodies, with a school environment where you can achieve status and popularity by declaring a trans identity.”

Added to that phenomenon, he said, is “the teenage temptation to ‘stick it to mom,’ combined with the intoxicating influence of social media.” He called it “a social contagion” and compared it to bulimia and anorexia disorders.

I challenge Schroeder to find one person who came out as transgender to be popular. Many face bullying and discrimination, often skipping school or dropping out because they do not feel safe. More than half have seriously considered suicide in the past year, according to a national survey by The Trevor Project.

Three University of Wyoming student athletes told legislators about their transgender friend, Mack Kramer, who wrote an op-ed for Sweetwater Now about how allowing trans students to compete in sports is not only fair, but compassionate.

“In an epidemic of trans suicide, it seems the least our legislators can do is provide the opportunity for trans folk to participate in a supportive, loving, growing community,” Kramer wrote last March.

“To enact a piece of legislation like this after one of our own exceptional students took their life after struggling for so long would be utterly lacking in empathy,” said Hannah Crockett.

Peri Hennigar, a member of UW’s track team, said the WHSSA’s transgender policy “allows people who know the student personally to make the best decision for that student.” She said UW is covered by NCAA rules, and a transgender student’s eligibility is determined by the sport’s national governing body.

Senate File 52, Hennigar said, violates NCAA rules and “puts us at risk of being sued and excluded from competition.”

Lawmakers have debated how to retain high school and college graduates in Wyoming for decades, with few tangible results. Riley Skorcz, a fifth-generation Wyomingite on both sides of her family, said legislators are making matters worse.

Skorcz calculated the state has spent at least $165,000 on her education.

“The second I graduate from the University of Wyoming I am leaving the state and will never return,” she said. “Why would I want to stay in a state that repeatedly proves that it is not welcoming to LGBTQ people like me? The culture that we have created, that SF 51 enforces and encourages, is not a culture that I want to live in.”

Sen. Chris Rothfuss (D-Laramie) joined Sen. Affie Ellis (R-Cheyenne) in a bipartisan rejection of SF 51. But they were outnumbered by Sens. Charles Scott (R-Casper), Tim Salazar (R-Riverton) and Anthony Bouchard (R-Cheyenne), whose votes sent the bill to the full Senate.

“This is us taking away the flexibility and the thoughtfulness of the process we currently have,” said Rothfuss. “… It doesn’t support our trans community, their desires to compete, their struggles in the world, the hardships they face.”

He said the bill is unconstitutional, and predicted it will cost the state at least  $1 million to defend if it becomes law.

But Senate Education Chairman Scott scoffed at Rothfuss’ spot-on warning. He said making accommodations for trans girls’ gender identity can’t be at the expense of biological girls, because it creates unfair competition.

“Frankly, I think if this [issue] gets at a high enough level in the courts, they’re going to see the common sense of this and go protect the larger part of the population,” Scott said. “It’s one of those things, you can’t have it both ways.”

Schuler said female transgender students can compete in speech and debate, and if they want to play sports, they can join co-ed teams. “They also have the option to compete as males,” she said.

In other words, go be someone you’re not. Learn to live with it. Don’t sue us. And if you feel discriminated against, you can always leave Wyoming.

If that’s really what the state wants to say to LGBTQ students like Riley Skorcz and transgender students who identify with the late Mack Kramer’s struggle to be accepted, I want no part of it.