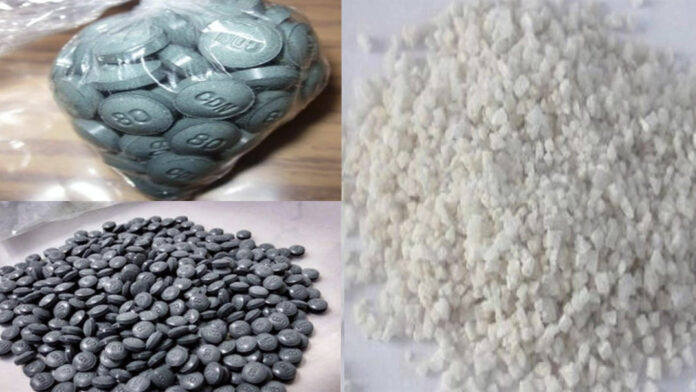 Gillette Men Face Life In Prison After Being Caught With 7,000 Fentanyl Pills, 10 Pounds Of Meth

Two Gillette men face the possibility of life in prison after leading Campbell County authorities on a chase earlier this month that ended with them being captured with pounds of methamphetamine and thousands of fentanyl pills.

Joshua Taylor and Brett Scheeler a maximum penalty of life in prison and a $10 million fine on charges of possession with intent to distribute methamphetamine.

According to documents filed in U.S. District Court, a special agent received information in November that Taylor was involved in the selling and distributing of methamphetamine and fentanyl in the Gillette area.

Due to information received during the investigation, the agent believed Taylor was traveling to the Arizona area to pick up a large quantity of meth and fentanyl in early January.

The agent applied for and was granted a warrant to track Taylor’s cell phone. The tracking showed Taylor left Gillette on Jan. 6, heading south. The morning of Jan. 7, Taylor’s phone was in the Phoenix, Arizona area.

Using GPS location technology, the agent was able to determine Taylor was returning north the evening of Jan. 7.

Around 11 a.m. on Jan. 8, agents conducted surveillance on the route Taylor would most likely take to return to Gillette. During that time, they saw a white Chevrolet Suburban that was occupied by two men, one of whom was Taylor, court documents said.

Less than an hour later, a Campbell County sheriff’s deputy conducted a traffic stop on the Suburban. Scheeler was the driver and Taylor was the passenger.

The deputy asked for identification from the men and requested they both get out of the vehicle, but Scheeler drove away from the police and a chase ensued.

Although Scheeler drove the vehicle over a spike strip that had been deployed by law enforcement, he continued driving for several miles on flattened tires before turning onto a road. At this time, Taylor exited the vehicle and began running from police on foot.

As Taylor was running, police could see him throwing items out of a backpack he was carrying. They later determined he threw out a large quantity of meth and fentanyl pills.

Scheeler continued driving and crashed through a fence, finally coming to a stop. Deputies apprehended him and found a black handgun and syringe (containing suspected liquid methamphetamine) on the passenger floor directly behind the driver’s seat.

Agents also collected the alleged drugs Taylor threw and collected 6.4 pounds of suspected meth and 9 ounces of fentanyl in pill form. A subsequent search of the vehicle found more drugs.

In total, approximately 10.4 pounds of meth and 7,100 pills of fentanyl was recovered.