Emergency personnel are one the most important faucets of the community but could easily be forgotten until needed. One of those groups of hero’s is the Campbell County Fire Department (CCFD), and its role in the community has never been bigger.

CCFD responded to its most calls ever recorded in 2021. The women and men of the department responded 2,559 calls for service last year, an increase of 107 in one year and nearly 500 more in the last five years with the same size department.

“We are looking at ways to grow our department but that is a process,” Campbell County Fire Chief Jeff Bender said. “The requests for service does continue to increase every year but our staff is the same size. We are hoping to add couple of positions in the next fiscal year.”

The increase in annual responses is no surprise when looking at recent history and the trends of the county. The request for service from the CCFD has increased steadily the last five years. In 2017, the department responded to 2,071 calls, which bumped to 2,147 in 2018. 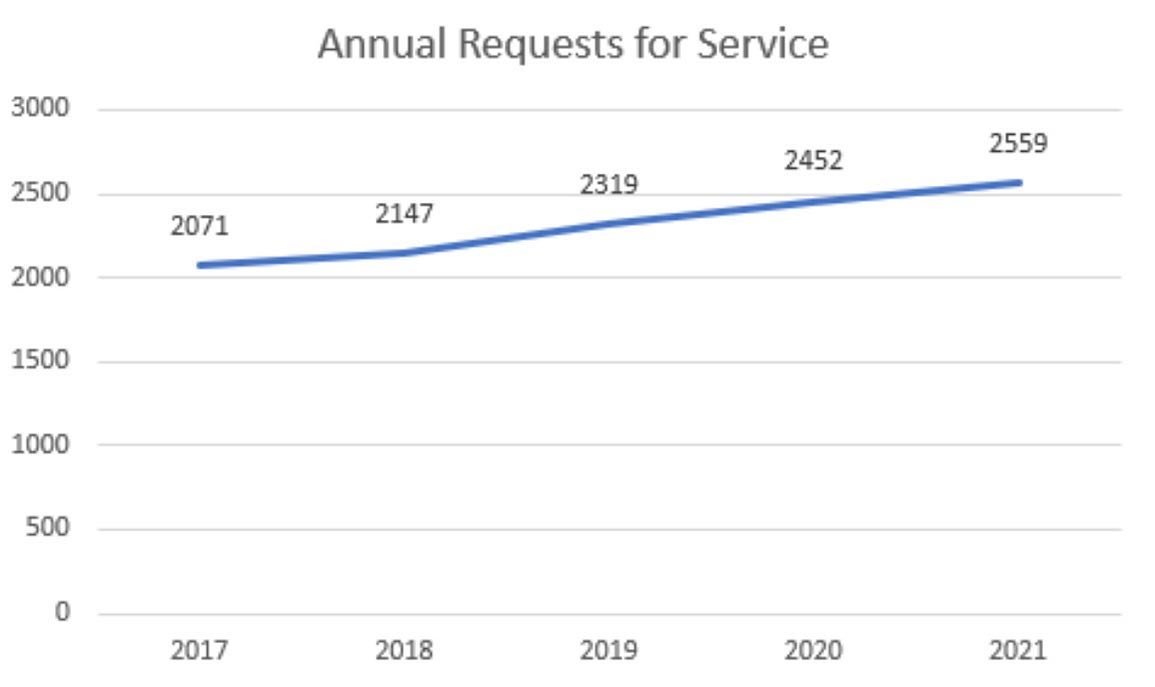 Those two years were followed by the biggest year-to-year jump during that time as CCFD fulfilled 2,319 requests for service in 2019. Then, in 2020, the department responded to 2,452 before the record high recorded last year.

Of the 2,559 responses last year, CCFD battled 271 fires, 154 which were wildland fires. The wildland fires consumed 13,238 acres. The overload of responses include but are not limited to traffic incidents, fire alarms, medical emergency and rescues.

“Our department relies on the dedication from everyone, from career and part-time personnel. In addition to the regular shifts they work, they also respond to calls at any time and any day. It takes a toll on everyone getting through a busy year like we just saw,” Chief Bender said. “I am very thankful for their willingness to answer the call every time needed, even when off duty to help out when needed in the community.”

With nearly 5,000 square miles to cover and approximately 47,000 citizens to protect, the requests for service from the fire stations continue to grow in Campbell County every year.

It’s still cold outside but it’s the time of year when CCFD is looking to fill dozen summer positions. The department will be accepting applications and resumes for the seasonal firefighter program through the next two weeks, with the deadline Jan. 28.

CCFD has struggled to fill all its positions in recent summers. It hopes this year to bring on a full seasonal crew of wildland firefighters and at least one experienced Engine Boss.

“Those seasonal spots are important and it’s hard to fill them all when we have to compete with Forest Service and BLM for qualified crew,” Chief Bender said.

It is a 15-week position which begins June 3 and could extend additional weeks if wildland fire season permits. The department will hire up to 12 firefighters, including two Engine Bosses and two lead crew members.

Required are a valid drivers license and must be 18 years or older. Certified firefighters are also needed.

All applications and resumes must be submitted by the deadline at Campbell County Fire Department, 106 Rohan Avenue, Gillette, WY, 82716 or by email at sclikeman@ccfire.us. Applications can be obtained at Fire Station #1 or by request via email from Captain Sam Clikeman.