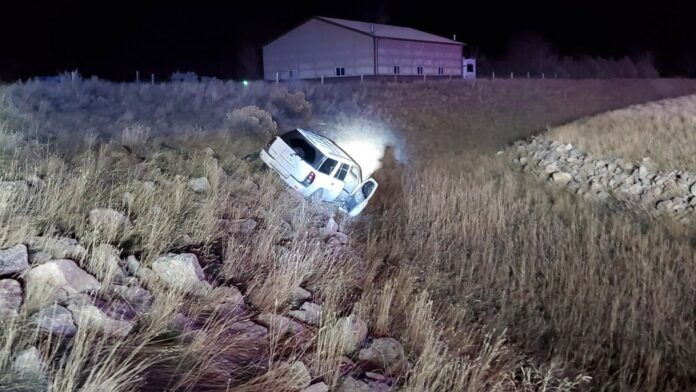 A Gillette man was arrested Sunday after leading officers from multiple Wyoming police departments on a high-speed chase in the middle of the night through parts of Natrona and Converse counties.

Louis Walker was booked into jail Sunday on multiple charges, including eluding police officers, reckless endangerment, possession of a controlled substance and more after leading authorities on a chase reaching speeds of up to 120 mph, according to Evansville Police Chief Mike Thompson.

According to the Evansville Police Department, at around 2:40 a.m. Sunday officers were on a routine patrol when one observed a white Chevy SUV go through a red light without attempting to stop.

The SUV then jumped the curve as it headed eastbound, then went across the barrow ditch and proceeded through a car wash

The car then pulled into the parking lot of the local Comfort Inn and stopped. While officers were giving commands for the car’s occupants to exit the vehicle, a passenger exited on the rear passenger side.

The vehicle’s driver then drove off with two occupants and police began a chase.

The pursuit went east and then south into Casper. There was little to no traffic on the roads, so officers continued the chase as the SUV went on Highway 20/26 and headed east.

As the pursuit neared Glenrock, officers from the Glenrock Police Department deployed tire deflation equipment. The SUV ran over a spike strip and continued east through Glenrock at a high rate of speed.

As the SUV neared Interstate 25 to go east, the driver side front tire came off of the rim. The SUV then got on the interstate heading south in the northbound lane, traveling at speeds of around 90 mph.

Wyoming Highway Patrol and Converse County Sheriff’s officers were notified and requested to assist along with the Douglas Police Department.

Between Glenrock and Douglas, the SUV came to a stop and officers could sparks coming from the wheel without a tire. A man exited the SUV, at which point the vehicle took off again.

The man who got out of the vehicle was detained by one officer as the others continued to pursue the SUV. The man told the officer that there were weapons in the vehicle and that the two occupants “would not go down without a fight.” the Evansville Police Department release said.

As the pursuit neared Douglas, officers again deployed spike strips, which the SUV ran over. It continued south in the northbound lane until it went off the road.

The SUV came to a complete stop after going over some rocks that were on the bank of a drainage ditch. The driver and passenger were then taken into custody.

Officers found a loaded handgun in the vehicle after the driver and occupant were removed at gunpoint from the vehicle.

The driver indicated there were drugs in the car and other information was given about the men using cocaine earlier in the evening at a local establishment.

Two of the men in the car are not allowed to have firearms by law.

The pursuit went for approximately 58 miles and several times reached speeds of 120 mph.

Thompson told Cowboy State Daily on Monday that usually when people run from the police for minor traffic violations, that is a sign that there is a worse crime taking place.

“You shouldn’t run from the police, it’s a huge safety issue for yourself and the vehicle’s occupants,” he said. “As a driver, if anything happens to them, you can be liable. It also leads to significant charges, which can affect people’s lives and livelihoods.”