What: “Drinking Habits” by Tom Smith

Tickets: Purchase the dinner theater tickets in advance through Today only at GCT Box Office

The pandemic has taken a toll on community theater productions across the country for more than a year now. In Campbell County, local talent is ready to put that all behind by raising the curtain and welcoming the return of entertainment with a dinner and show Friday-Sunday.

The Gillette Community Theater (GCT) this weekend will have three performances at Prairie Sky Venue of the popular story by Tom Smith titled “Drinking Habits” which has been in the works for more than a year.

“This is actually our third cast I’m working with just for this show. We thought maybe we could revive it last winter around February, but we couldn’t get enough people because of COVID-19,” Director Claudia Urlaub said. “Then we were supposed to have a summer show and go to Cheyenne in the fall for state competition and both were cancelled because of COVID-19. It’s been a long road to get here and we are excited about what we will give the community.”

After all the delays, there are only two original cast members from the first audition nearly two years later. Jonathan Borrego is the only cast member remaining in his role. Tanya Johnson was in the original cast but is now playing a different role.

New casts are Johanna Cryer, Michelle Krumberger, Rosie Anderson and Tonya Johnson who are all brand new to community theater.

“Rosie and Johanna have acted in the past. Tonya and Michelle have come to plays but this is their first acting experience,” Urlaub explained. “Michelle’s daughter was in high school and college plays, so she knows what it takes. She just didn’t know one day it was going to take her.”

GCT is excited to finally get a chance to showcase local talent with its new eight-member cast. Everyone involved hopes this is the beginning of being back on schedule with community theater.

“We try to do four shows a year but we are just now able to gear back up from COVID-19,” Production Manager Jude Dodd said. “This is our first big production of the year, and we couldn’t be more excited about this show.”

Urlaub is excited to get back to what she is used to doing – directing multiple big shows a year.

“Usually, we do three or four a year, but right now we are about to have our fourth one in two years. Things are picking up for us finally and we already have four slated for 2022. We even have them all picked except the one for next winter’s dinner theater,” she said.

The cast has been working overtime in recent weeks in preparation for the debut of “Drinking Habits.” With a running time of 2 hours, 15 minutes, the story is one of comedy, accusations, mistaken identities and sprinkled with some romances that are wild.

At the first rehearsal at the Prairie Sky Venue, Urlaub and Dodd sat across the room and both broke out in laughs early and often as the cast polished up its performance. There are several one-liners in this story, such as “you look as nervous as a marshmallow at a BBQ.”

As the play begins, Sisters of Perpetual Sewing, sisters Philomina (Tanya Johnson) and Augusta (Tania Young) have a secret – they’ve been making wine and selling it to keep their tiny covenant afloat. If Mother Superior (Michelle Krumberger) knew she would lose her mind because she can’t even say the word “wine” or “alcohol,” much less sip on a glass. Instead, she refers to it as “you know what” in several instances.

However, Sally (Johanna Cryer) and Paul (Jonathan Borrego), know something isn’t right and are determined to get to the bottom of it.

They go undercover as a nun and priest. That’s when the fun – and laughs – take center stage. Wine and secrets are inevitably spilled as everyone tries to preserve the convent.

Groundskeeper George (Bud Miller) helps with more than the grounds. He assists the sisters in harvesting the grapes to make the bubbly under the nose of the watchful head of house. Mother Superior already has a lot on her mind as news has come from Rome that their order may be on the chopping block because of its insignificance.

Sally and Paul are a couple of news hounds nosing around the convent for a scoop to build a story. Throw in the local priest who has a tiny secret of his own. Sister Mary Catherine (Rosie Anderson) and Father Chenille (Mike Conway) made their presence known – and heard – as the plot thickens.

Keeping a convenient secret is not easy and the laughs will flow through the acts like fine wine. 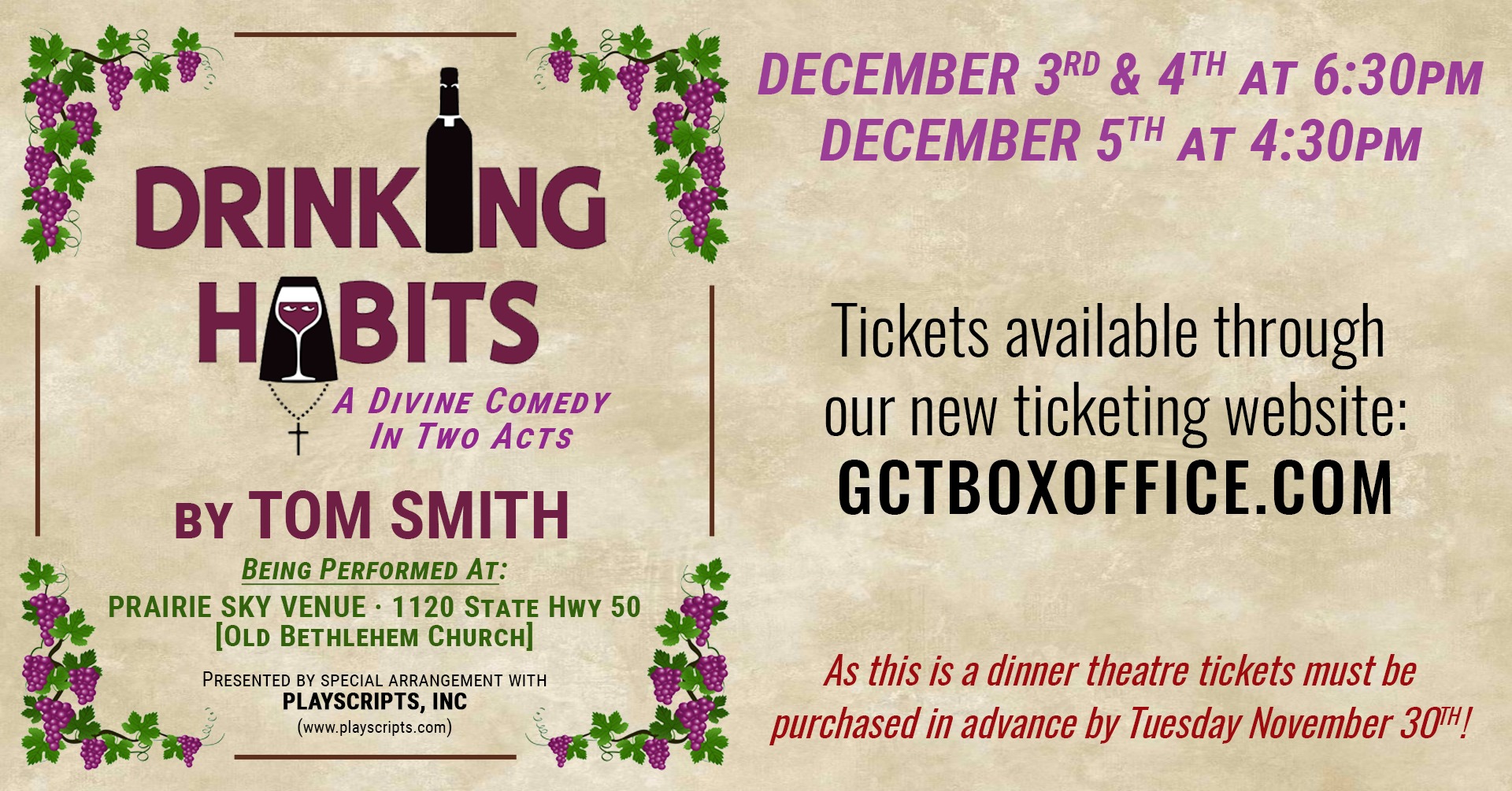 The dinner for the biggest theater show of 2021 will be prepared by Girl Scout Troop 1160. There will be two dinner options:

Made with pasta, red sauce, ground beef, cheeses, and spices.

Both dinners will also come with a salad, bread, and choice of Russian Creme or Chocolate Pudding for dessert.

“All of our shows are always family friendly so there will not be alcohol,” Urlaub said. “We will have water and something like a punch that has a little color so it gives you the feel of wine.”

Bingo at the break

For the first time ever, every ticket not only includes the dinner with dessert as well as the hilarious play put on by the amazing local talent but attendees will also be given a bingo card to play along during intermission. There are several prizes being supplied by local community businesses to win.

Those who love some Bingo will be able to purchase additional cards at the event. All proceeds help benefit GCT.