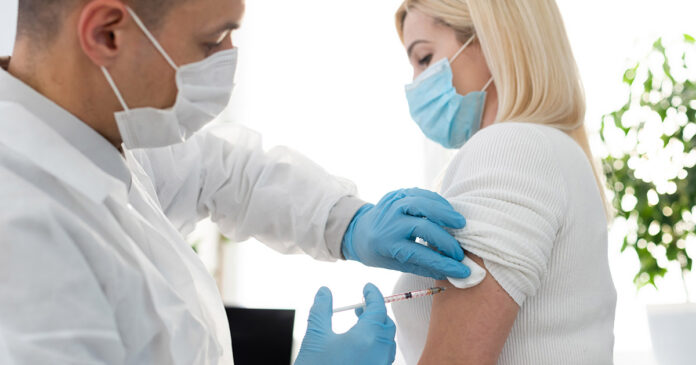 The Biden administration on Thursday announced a January deadline for a new private sector vaccine mandate that could affect 100 million Americans. A business group and a free market think tank quickly filed suit, saying the mandate is illegal.

The federal regulation comes from the Department of Labor’s Occupational Safety and Health Administration (OSHA). Biden announced the mandate in September, but this week OSHA released details of the rule, most notably that businesses with 100 or more employees must ensure their workers are vaccinated or require weekly COVID-19 testing by Jan. 4.

OSHA is also requiring that employers make unvaccinated employees wear masks while at work or when in a vehicle with another person for work purposes.

“The Administration has previously implemented policies requiring millions of federal employees and federal contractors to be fully vaccinated. To make it easy for businesses and workers to comply, the Administration is announcing today that the deadline for workers to receive their shots will be the same for the OSHA rule, the CMS rule, and the previously-announced federal contractor vaccination requirement,” the White House said Thursday. “Across all three requirements, workers will need to have the necessary shots to be fully vaccinated – either two doses of Pfizer or Moderna, or one dose of Johnson & Johnson – no later than January 4, 2022.”

The mandate raises concerns that a worker shortage crisis across the country will accelerate as those who decide not to receive the COVID-19 vaccine are forced out or decide to leave their jobs. It also raises concerns about testing costs and how to enforce mandate.

The fine for violating the new regulation would be $14,000 per violation, though the administration said multiple factors would be considered.

“Yeah, so, and again, depending upon the number of violations that would be identified would have some, you know, a significant impact on the scope and scale of the amount of a penalty, that would be cited and put into the citation,” a senior administration official said during a press call on the matter. “We also have a scale that is increasing with more severe violations. So, for example, if we identify that an employer is willfully violating a standard, then that penalty is significantly higher than a workplace that is not willfully doing so.”

The official said the number of violations would play a factor as well.

“So $14,000 per item that would be cited,” the official added. “So if there were multiple items out of the standard that we cited, there would be, you know, multiple penalties that could be issued along with that. We also would assess whether or not there were multiple violations depending on the number of instances of the violation that we were looking at. So, you know, potentially there could be multiples of that. But it would depend upon the situation during the inspection and the evidence that was presented.”

The announcement has sparked major pushback from critics who say it crosses the line of federal overreach and invades the privacy and personal choices of Americans. The latest Rasmussen polling found 52% of Americans support those who would resist the workplace mandate.

The business advocacy group, Job Creators Network, announced they filed a lawsuit Thursday with the U.S. Court of Appeals for the Eighth Circuit. The lawsuit represents an employee as well as several businesses standing up to the rule.

“The Biden Administration’s vaccine mandate is clearly illegal and will have a devastating impact on our small business community and our entire economy. JCN is suing the Administration on the grounds that OSHA does not have the authority to impose such a mandate,” said Alfredo Ortiz, JCN President and CEO. “Even if OSHA did have the power, there is neither the grave danger nor necessity to issue such a sweeping regulation.”

The Buckeye Institute, an Ohio-based a free market think tank, also announced it has sued the Biden administration over the mandate.

“This unconstitutional and ill-advised vaccine mandate not only impacts companies like Phillips Manufacturing and Sixarp and their employees, but it will also devastate an already fragile labor market and supply chains that are still struggling to recover from the pandemic,” Robert Alt, president and chief executive of The Buckeye Institute, who is counsel of record representing Phillips Manufacturing and Sixarp LLC, said in a statement. “In imposing this mandate, the Biden Administration has sought to circumvent limits on federal power, and – in so doing – has exceeded anything the Occupational Safety and Health Act allows. The mandate will cripple our economy, injure mid-size businesses who cannot find workers as it is, and – worse yet – violate the cherished principles of freedom of conscience upon which our great nation was founded.”

“If the mandate does what the president promises, private and religious employers failing to comply could be subject to crippling fines,” ADF said in its threat of legal action. Eighty million Americans will be affected. Maybe even you and your loved ones.

“ADF will take legal action if the Biden administration follows through on this executive overreach,” the group said. “ADF is responding to federal government overreach because the executive branch simply has no authority to tell private businesses and nonprofits that they must force their employees to be vaccinated or submit to costly weekly testing.”

Critics also point out that the Biden administration previously said that such a mandate was not the role of the federal government.

“Well, I think the question here – one, that’s not the role of the federal government; that is the role that institutions, private-sector entities, and others may take,” White House Press Secretary Jen Psaki said in July when asked about mandates.