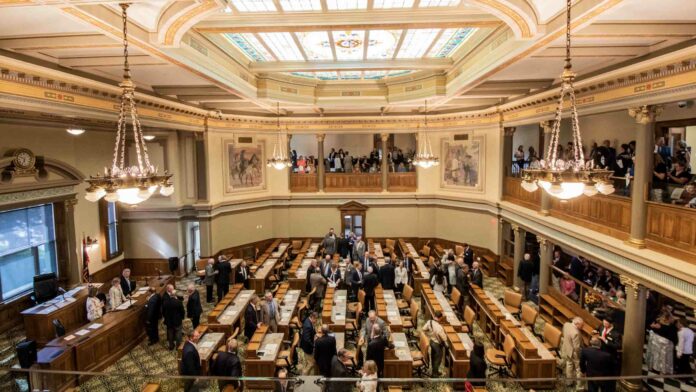 Although the paper votes have yet to be certified, it appears as though enough legislators have voted in favor of holding a special session later this month.

Several Wyoming lawmakers on Thursday announced they had received word that a majority of both Houses voted (electronically) for a three-day session designed to address President Joe Biden’s federal vaccine mandate.

If the paper ballots sync up with the electronic votes, then the session scheduled for October 26 – 28 will occur.

It was a close vote. 36 members of the House and 18 members of the Senate voted yes on the session. The threshold necessary to commence was 30 and 16 respectively.

“What a huge moment for our state!”, Rep. Chuck Gray (R-Casper) tweeted. “I continue to work on bills for the session.”

“Just got notice there are enough unofficial electronic ‘aye’ votes in both houses to call a special session,” Rep. Dan Laursen (R-Powell) said. “Leadership will wait to officially send a letter stating we are having a special session to the Governor until enough hard copy official ballots are received.  This is good news!”

Last month, Senate Majority Leader Ogden Driskill (R-Devils Tower) said he was 90% certain the special session would occur because President Biden’s vaccine mandate was an “egregious overreach” of the Biden administration and it was worthy of “whatever expense to fight for Wyoming citizens’ rights.”

Bills are already being worked on to address the mandate which stipulates that employees who work for companies of more than 100 people must be vaccinated or receive weekly testing.

Gray said his bill would subject companies who follow the federal mandate and penalize an employee to a $500,000 fine per victim.

Sen. Tom James (R-Rock Springs) said he will introduce a bill that targets a “public servant” with fines and prison time for attempting to enforce the mandate.

Last month Driskill said he was more interested in “out-of-the-box” solutions like using federal COVID funds to pay for federal fines imposed on businesses that don’t follow the mandate.

He also said the state could “widen the window” for exemptions to the federal law.

“There’s always been a history that you can’t be challenged if you are using a religious exemption,” he said.  “You can’t challenge it.”

Other Republican leaders weren’t convinced that a special session was a good idea.

“I think there’s a legal fix in the courts,” Sen. Cale Case (R-Lander) said during a hearing earlier this week. “But I don’t see a way the Legislature can fix this.”

“Our President’s mandate has no place in Wyoming. Unfortunately, we have no clue what his mandate looks like under rule making process and we would be fighting against a rule that doesn’t exist yet,” Brown said.

Brown went further the state shouldn’t be involved in the first place.

“If a private business wishes to impose hiring protocols that an employee is uncomfortable with, they have the choice to not enter into that employment,” Brown said.

“Likewise, the business should be ready to suffer the consequences of the choices they choose to impose or not impose on their employees and the response from the public,” he said.

An official announcement after the paper vote is expected on Friday.