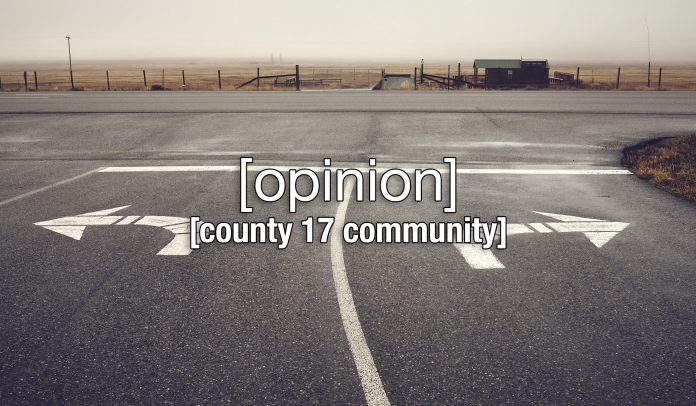 After reading news stories about the recent criminal complaint against the Campbell County Library, I can’t help but be saddened and disappointed. The town I called home, while full of good and loving people, continues to let its ugliest voices speak the loudest. The question at the front of my mind is “Still? This is still how this town is to be known to the rest of the world?”

I first came to Gillette in 2006 as a coal mine geologist. The ink was still wet on my degree from the University of Wyoming. Though I lived in Denver, Gillette was a regular site for my fieldwork. I got to know the town and the energy economy well as I worked to help predict quality and volumes at the Dry Fork Mine. I saw Dry Fork Station completed and I took pride in seeing the coal trains leave our mine.

Geology wasn’t how I’d make my career, however. In 2012 I started my first job in aviation. I’d have never guessed that flying would take me to Gillette, but I found work as a flight instructor and wildlife survey pilot at Flightline at the Campbell County Airport. For five years I taught ranchers, miners, police officers, and other remarkable people from our community how to fly.

I flew wildlife surveys for sage grouse, raptors, deer, and pronghorn all over Wyoming and other western states. I’ve never felt as passionate about my work as I did then and I’ve never worked as hard as I did during my time as a Gillette resident. Seeing my students reach their goals and earn their pilot certificates was fulfilling to the utmost. Being a part of the effort that kept the sage grouse from being listed as endangered is one of the things I’m most proud of from my career. I met so many good people, made some close friends and more than any time in my life, I felt like an active, proud, contributing part of my community and I felt very welcome by the people I knew and worked with. I cherished that pride and didn’t want to give it up.

Despite my professional pride, I was hiding something much more troubling in my personal life. I was hiding the shame of being a closeted gay man in a small town. I was in my early 30s and didn’t know what to do. It was frightening to imagine what my friends might think and the thought of dating in Gillette wasn’t even an option I considered. I feared losing the faith of my clients and therefore my job, even though I knew my employer to be supportive. I feared the looks and remarks from strangers and I knew there would be people who would be unwelcoming.

My strategy was to simply hide from my shame, bottle it up, and pretend there wasn’t an issue. Putting that part of my personal life on indefinite hold, I kept my nose to the grindstone, doing the flying I loved most. That love of my work was what was keeping me in Gillette. Ignoring this wasn’t going to lead to a healthy future and I began to realize this. Slowly I started taking steps. I came out to my close friends and I started to search for work elsewhere. When a job flying wildlife surveys came open in Phoenix, I jumped on it and left Gillette at the start of 2017. Shortly after the move, I came out to my parents, who were loving and supportive, and within a few months, I’d met the man I’m now engaged to.

I’ve kept up with a number of people from Gillette and I still return there for contract work from time to time. Many of my Gillette friends have reached out to me with their support, others I haven’t heard from in years.

Two years ago I began flying for an airline and occasionally Gillette is on my schedule. On each of these flights, I make a cabin announcement welcoming people to my former hometown. When I return, I find that there hasn’t been much that’s changed since I first arrived fifteen years ago. In some ways that’s comforting, and in others it’s exhausting. Hearing about the magician who was run out of town for being trans wasn’t unexpected, but it was disheartening.

When I read about citizens bringing a criminal complaint against the library for their young adult book selection, I had to know more. I bought a copy of “This Book is Gay,” by Juno Dawson, a book that was seen as criminal. I read it in one day. What I found was a lovingly written book for young gay people on critical issues that they will face such as mental health, coming out, finding their place in society, and yes, sex.

No such book was available when I was in high school and I can conclusively say that if I’d read this book in high school, I’d have been spared years of stunted personal growth and the overwhelming sense of shame I carried from my teens until I was 34. This book’s message is critical to young people who are going through what I did, especially in towns that lack a robust support network.

The book absolutely contains explicit content in one chapter. This is thoughtfully presented as the critical same-sex curriculum that is left out of nearly all sex-ed classes in America. Without a responsible source for this information, gay kids are left to hear-say or worse yet, to plumb the depths of the internet for guidance. Plenty of students aren’t ready for this information, but many are.

Pretending that same-sex relationships don’t exist leaves a tremendous void of information and is directly responsible for spreading STIs, the shame and guilt that lead to mental illness, and the staggering youth suicide rate found in areas where gay kids are afraid to come out.

To consider this kind of information as criminal harkens back to when gay clubs were raided with mass arrests. It’s reminiscent of the attitudes that kept brave soldiers from fighting for their country because of who they loved. It suggests that we’re less human and not worthy of being in the community, that we’re threats to the children.

Even if you think that none of this applies to you or those in your circle, I guarantee it does. People you know in this community, people whose lives you touch, are listening to how you respond. They’re listening to what you say and like I was, they’re scared.

I gave my best to this community and I’m proud of it. I hope that our better voices will speak clear and loud and reject this willful and determined ignorance, these loud voices which seek your silence and have no desire for understanding. We’re better than this. Gillette is better than this.

If people don’t stand up to these voices and make it known that Wyoming really is the Equality State, there are two possible outcomes for those left behind.

At best, more people will take their passion, skills, and love and give these gifts to other more welcoming communities.

At worst, those people left in darkness and loneliness will live with fear and shame, a burden that even the strongest individual cannot shoulder for long.