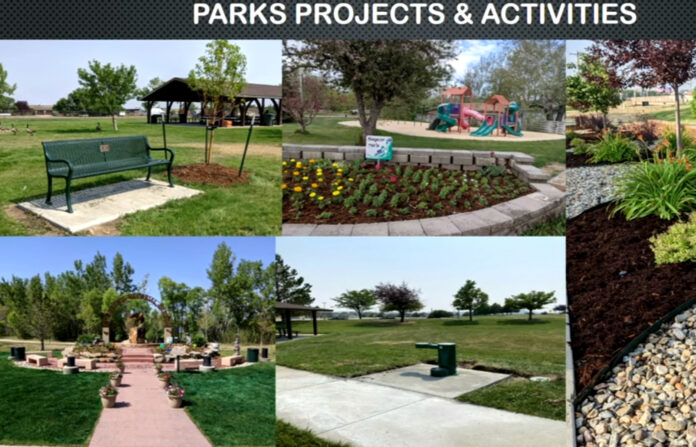 There wasn’t a lot of rainfall this summer, but that didn’t mean the city’s Parks Department wasn’t busy. There were projects throughout Gillette, ball fields to manicure, and plenty of trash to be collected to keep our community beautiful.

The Gillette City Council received its annual summer debriefing from the Parks Department and there were lots of numbers to share and improvements to be announced.

“We did quite a bit considering we didn’t get a lot of rain this summer. We didn’t did have quite the mowing we had the in the past, obviously, because it was dry,” said Parks Manager Jamie Kuntz. “We still mowed, trimmed and edged approximately 1,772 acres, or 1,343 football fields.”

That was just the start of the busy summer for the department. Parks crews collected 4,062 bags of trash in general cleanup around the city and facility property prior to mowing.

“That has made such a difference in our community,” said Mayor Louise Carter-King. “I think our community looks beautiful, thank you.”

Kuntz advised the council that her department was budgeted for 36 seasonal workers this summer but never managed to fill all the jobs. At the season’s peak, there were 27 temporaries working in parks and three on the streets crew.

The activity at local parks was busy in 2021. Kuntz reported there were 464 reservations in 2020 and that number was significantly up this year with 595.

The department dedicated nearly 2,700 labor hours to field maintenance. A total of 1,666 hours were spent at Dalbey Memorial Park and 1,044 at the Energy Capital Sports Complex to prep for practices and games.

Along with landscaping and field prep is caring for the grounds and pest control. The department treated 2,005,600 square feet of land with weed spraying and fertilizing. That came at a cost of 712 labor hours.

The council was updated that there are now 18 memorial benches placed throughout town. Two new ones were installed at Dalbey Park that were bought by citizens in memory of loved ones.

Summer crews also resurfaced five playgrounds with fiber. In addition, a replacement pad at the splash pad, a new drinking fountain installed and lots of mulching was done.

“We chased weeds all summer and are still chasing weeds,” Kuntz said.

Improving the footing at the splash pad caught the mayor’s attention. Carter-King asked how the wet surface has improved.

Kuntz told board members the department applied non-slip strips to the ground which has helped the issue but that it continues to be a work in progress.

“We are still working on a better solution,” Kuntz added.

At Dalbey Memorial Park, the department made much-needed repairs to the boardwalk. Crews also painted the restrooms, painted and stained signage, and replaced lights at the Little League fields as well as installed a new picnic area.

“We painted a lot of shelters at most of the parks,” Kuntz said.

Also, the RV station at the park was rebuilt. It was busy all summer, staff said.

With summers end, the department is now working on shutting down the systems for the cold winter. That’s after a typical season where 22.1 million gallons of water were used.

One of the most popular additions were the Zip Lines at Sage Bluffs and Heritage Village. However, they were not functional all season as mechanical problems and struggles getting parts limited their usage. Both will be up and running for the spring.

Workers also had to replace underground pipe because of leaks at Little League fields 4, 5, and 6. It was an extensive project that was not expected going into the summer.

Kuntz advised that the Adopt-A-Planter program was a beautiful success even with the drought-like conditions.

There was a total of 903 flats of flowers, 74 individual hanging baskets, and 16 large planter containers along Gillette Avenue and 3rd Street.

In addition, Parks recently purchased 14 additional large planters that will be placed as part of the downtown beautification project. Crews also planted about 1,000 bulbs around town, including at the fire station along Dalbey.

In all, it took 296 labor hours to beautify downtown.

The city planted 52 trees this year, while 45 trees were removed. There were 51 transplanted and 140 were trimmed. In comparison, there were no trees planted last year.

COVID-19 and the lack of interaction with contractors brought all planting last summer to a halt.

“The West 4-J project will be another 100 trees coming in that will be planted next spring,” Kuntz noted for the council.

The city responded to 64 citizen requests regarding trees.

“Those are actually when I go out and do a homeowner assessment, whether it’s a request from another division or engineering or when we go out and trim an alleyway,” said Wendy Clements, the city’s arborist.

“So, if I have a tree I think is diseased, you would come and look at it?” the mayor asked.

Clements confirmed she would and that it’s part of the Mountain Pine Beetle Program, it all goes hand in hand. If there is an issue after the consultation, the resident or business would be recommended to a local arborist to do the work.

Speaking of the Mountain Pine Beetle, 13 trees were treated at McManamen Park. However, the city reports there are no new findings this year.

The department also planted three new memorial trees which brings the total to 19 to date.

“That’s definitely not a contest I want to be in,” Clements said. “Generally, if there’s is a memory tree planted, it’s not for good reason.”

13.8 inches of snow shuts down Gillette for a day