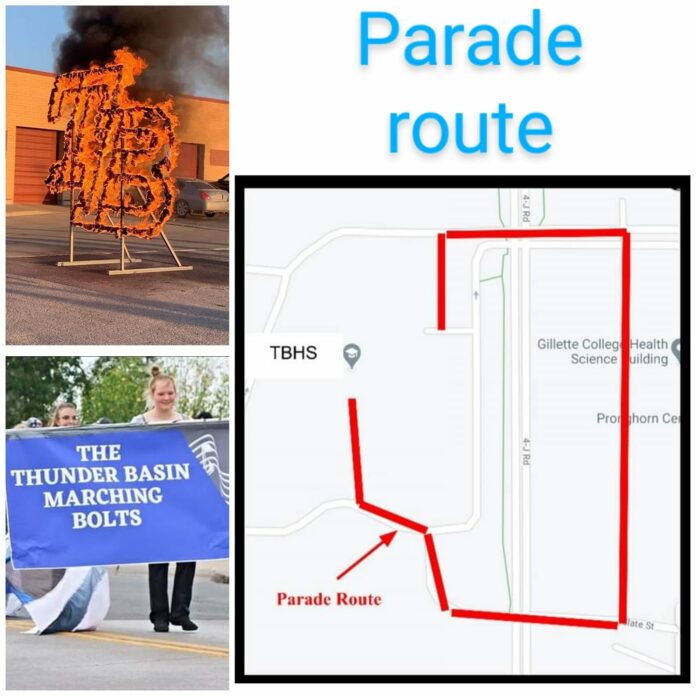 Thunder Basin will celebrate its short history throughout the week as it’s homecoming for the county’s newest high school. There are a few community events planned around this special week and the biggest of them all outside of the game itself is the parade.

The parade is today at 4:30 p.m. and will go along the new route that was implemented last year. The parade will begin at TBHS, cross Enzi Drive, continue east on Sinclair Street, turn right onto College Drive, then right on Slate Street, crossover Enzi Drive again and end at the high school.

In typical fashion, the parade will include athletic teams, homecoming court, band and many other entries to fuel that Bolt pride.

The next public event will be 6:30 p.m. Thursday when the booster club hosts the annual Burning of Bolt. Then on Friday before the big football game, there will be a homecoming carnival outside of the high school from 4 p.m.. until the 7 p.m. kickoff against Kelly Walsh High School.

For students, the fun is daily and doesn’t end until the dance after the football game. There are daily dress-up themes at the high school which includes America Day (Monday), Nerd & Jock Day (Tuesday), College Day (Wednesday), Decades Day (Thursday) and Bolt Pride Day (Friday).

The homecoming court of princess, prince, queen and king were selected on Monday and will be announced by their appearance in the parade today. The 2021 queen and king nominees are:

Battle of Gillette on the hardwood