Campbell County showed its caring heart on a warm, sunshine-filled Thursday afternoon. But it wasn’t just any kind of day.

It was the annual Memory of the 8 run through Gillette. This year’s event marked the 20th anniversary of the wreck that killed eight University of Wyoming cross-county athletes. One of those lives lost was Campbell County High School graduate Morgan McLeland.

More than 400 runners, joggers, walkers and attendees were on hand to remember, commemorate and run for those lives that were lost way too soon. The massive crowd huddled in the parking lot at M&K Oil on 4-J road. At times, the mood was subtle and one could hear a whisper several feet away while the crowd was being addressed.

Speeches from organizers, friends and family of Morgan McLeland got everyone’s attention before the race.

“The promise of these kids whose lives were lost that morning on that highway is heartbreaking for all of us. We miss them every day. I know the other families miss their family members just as much,” said Debbi McLeland, mother of Morgan LeLand. “Every single one of them was a champion.”

This was the 11th annual Memory of the 8 run in their memory. Their lives were cut short when they were hit by a drunken driver while returning to Laramie after an event in Ft. Collins. It was the same week as the 9/11 attacks.

Governor Gordon spoke to family, guests, friends of members from that team and addressed the crowd.

“This tribute to Justin Lambert-Belanger, Morgan McLeland, Cody Brown, Kyle Johnson, Josh Jones, Kevin Salverson, Nick Schabron and Shane Shatto is both a celebration of community spirit and a reminder that we should never forget how important it is to drive sober,” Governor Gordon said. “Anytime we can remember the tragedy that befell these eight is unbelievably important. We have lost too many lives senselessly to people driving while they are impaired.”

After a moment of silence, the race was on. There were runners of all ages, abilities, teams, families, a couple in wheelchairs, one on crutches, a few dogs and a horse. There were no excuses on this day for hundreds running, walking and rolling to remember eight great young men. 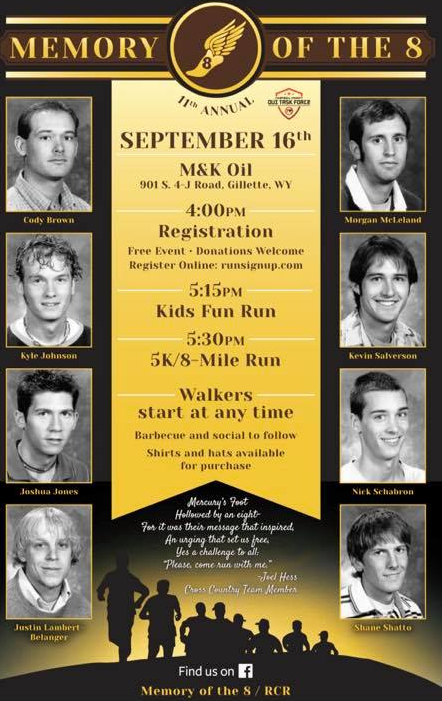