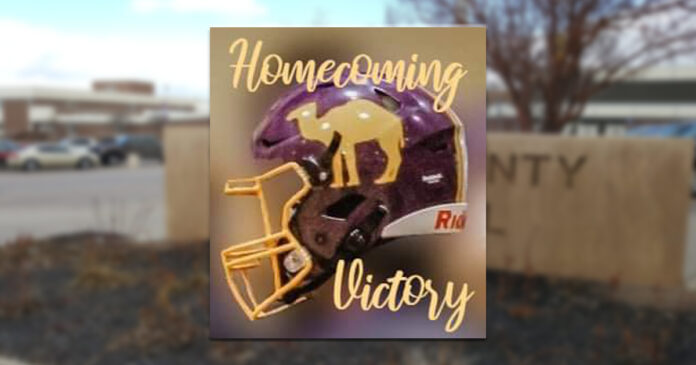 It was homecoming night Friday and the Campbell County High School football team had a date with Cheyenne South. The Camel’s made it a night to remember as they danced all over the Bison defense enroute to a 67-15 victory in front of a loud and proud home crowd.

The CCHS defense completely blanketed Cheyenne South. The unit, which got hits from many players including James Pelton and Ramar Pitter, held the Bison to one first down in the first half.

The defensive juggernaut played a part in Campbell County getting a big lead fast and furious. Five of its first six possessions started in Cheyenne South’s side of the field.

The Camel offense took care of the rest. On the first drive of the game, senior Will Miller broke free for a 43-yard play. Junior Ian Carter scored on the next play from two yards out and CCHS led 7-0 less then two minutes into the game.

The Bison were unable to match it and punted the ball right back.

Miller was a big problem for Cheyenne South all night. He struck again when he split defenders and sprinted 55 yards to the end zone for the touchdown and a 14-0 CCHS lead with 7:20 left in the first quarter.

Cheyenne South capitalized on a penalty to chalk up its first first down of the game. It went for nothing as the visitors punted three plays later.

That led it one of the very few hiccups of the game for Campbell County as the Bison grabbed their only interception of the game. But it went for nothing as they punted back a minute later.

That’s when the Camel’s really turned up the heat. Senior Brady Tompkins caught a pass from Aidan Dorr, then made a juke move, and ran untouched for the score and a 20-7 lead with 6:07 still remaining in the first quarter.

The Camel’s put on a show for the homecoming crowd the rest of the way. Dorr threw a 12-yard TD pass to Logan Dymond which made it 27-0 after one quarter.

The Camel’s scored three more times in the second frame. The two biggest plays were a 91-yard touchdown by Carter and a 71-yard score by Miller which gave CCHS a 53-0 halftime lead.

The red-hot Camels will host cross-town rival Thunder Basin next week in the biggest game yet between the rivals.

Battle of Gillette on the hardwood