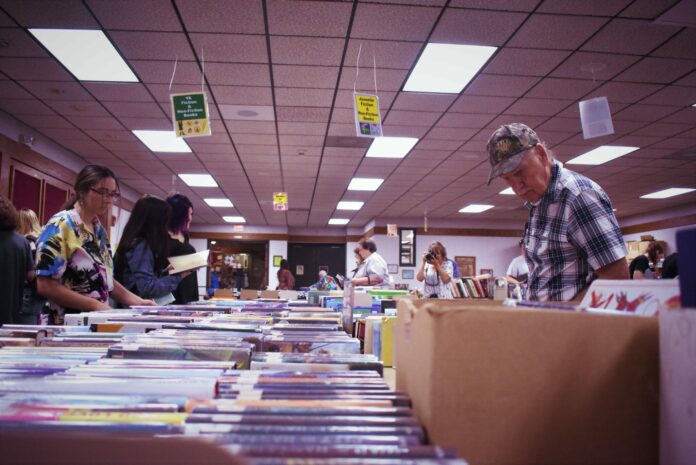 It was a room lined with tables overflowing with both information and imagination.

Pages rustled and bindings creaked as the Wyoming Room at the Campbell County Public Library (CCPL) buzzed with activity and murmured conversation between book enthusiasts who combed through the hundreds of volumes displayed in dozens of cardboard boxes Wednesday morning.

From history essays to the silliest children’s novel, there was something for everyone during the library’s 34th Annual Used Book Sale.

Donna Web, a volunteer with the Friends of the Library group, bustled her and there, answering questions from patrons about where to find graphic novels or a new Tom Clancy thriller. One by one, she organized and replaced gaps in the displays left behind as library patrons eagerly grabbed up book after book.

Some of those patrons were there that morning before the library opened its doors; others were coming back after a successful first haul during the early bird promotion reserved for Friends of the Library members the night before, Web said.

All in all, she noted, the sale was off to a good start and books were flying off the tables into plastic baskets wheeled around by eager readers.

While sales were steady, however, they still hadn’t made a significant dent in the mountain of volumes awaiting their new homes on Sept. 15, according to Web, there were still boxes of books that needed to be put out on display.

For every book that was selected, another one or two took its place. But that’s the mark of a good sale with plenty of selection from which to choose.

Patrons beamed with excitement as they waived books across the room at friends, announcing the discovery of the latest book in a series or a screaming $2 deal on another book that would ordinarily cost $20 or more at a store.

“We’ve found a ton of great books,” said Lindsay Rhodes, a patron of the library that moved to Gillette from Rapid City, such as some psychology and astronomy reads from the 1900s.

She was there with her mother; neither of them had come in with any particular titles in mind. Rather, as book lovers, they heard the term “book sale” and came running, Rhodes said.

Rhodes and her mother were only two out of dozens of book lovers at the sale, including 18 students from Westwood High School, who had been given permission to attend and a $10 budget thanks to English Instructor Lisa Tennant.

For her part, Tennant knew that many students in her class were avid readers and would relish the opportunity to have some of their own books but otherwise have not been able to purchase any.

“When I found out about the sale, I went and asked [Principal Kelly Morehead] if we could some funding together for some of our kids to visit the sale,” Tennant said, adding that the school principal agreed almost immediately.

Tennant herself had an armful of books and called out interesting titles to her students, all of whom eagerly picked their way through titles in nearly every section.

“This is way better than last year’s sale,” said Patty Hoskinson, an artist and Friends of the Library member who sat by herself on the Wyoming Room stage pouring over book after book. She was one of the members who attended the previous evening during the early bird promotion.

While also a book lover and avid reader, she was there going through books with an artist’s eye for any pages that were attention-grabbing that she could use for a future art piece. For reading and for creating, Hoskinson had a stack of books waiting for her at the checkout table for when she tired of searching through books.

With her being there nearly two hours already, that wasn’t likely to be soon.

There is still plenty to choose from at the CCPL 34th Annual Used Book Sale which runs through the weekend and ends on Monday, Sept. 20. Paperback novels are $1 and hardbacks are $2 for today and tomorrow.

On Saturday through the end of the sale, visitors will have the option to fill a bag for $5.