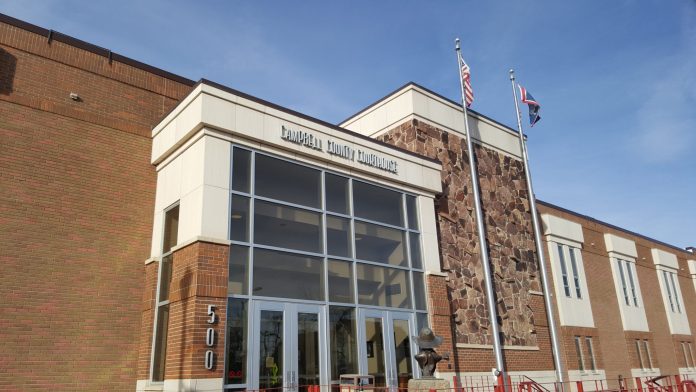 A preliminary hearing for a man suspected of selling drugs and attempting to hit his probation officer with his car has been set for Friday, court records say.

Kenneth Powers, 56, will appear before Circuit Court Judge Wendy Bartlett on Sept. 9 who will decide if there is sufficient probable cause to bind Powers over to District Court on two counts of felony possession of a controlled substance with intent to deliver, felony aggravated assault and misdemeanor interference.

The felony charges stem from a Sept. 1 incident that occurred shortly after authorities received three tips, one via text and two through Gillette Crime Stoppers, that Powers had several firearms and large quantities of narcotics that he was selling from his residence on East Laramie Street, according to an affidavit of probable cause filed in the case.

Powers was called to the Probation & Parole Office by his probation officer, where he initially denied any involvement when she asked him about the allegations, per the affidavit, which adds that he allegedly admitted there were guns in his roommate’s room.

When told that police were on their way to conduct a search of his house, Powers reportedly stood up, proclaimed he needed to use the restroom, walked out the door, and ran to his vehicle despite multiple orders from his probation officer to stop, the affidavit states.

The probation officer followed Powers into the parking lot, where she had to leap out of the way as the suspect drove a gold Nissan Maxima directly at her, per the affidavit.

The vehicle was found, abandoned, on Warlow Drive by Campbell County Sheriff’s deputies while Gillette police responded to Power’s address, where they observed a 53-year-old male inside who refused to answer the door, the affidavit states.

Officers were granted a search warrant, the affidavit continues, and the male was forced out of the residence with OC gas. Inside the residence, officers found that the male had been allegedly flushing marijuana down the toilet, the baggies and containers for which were in the bathroom trashcan.

The 53-year-old male was arrested for interference.

They located around one pound of marijuana in Powers’ bedroom, some in a nightstand and the majority in a safe, along with a digital scale and a box of baggies, per the affidavit.

In a mini-fridge, also in Powers’ room, officers located a folded-up piece of tin foil that contained 82 tabs of LSD, the affidavit states.

The amounts of marijuana and LSD, the investigating officer wrote in the affidavit, were well beyond what is considered a normal user amount and combined with the scales and baggies, showed that Powers intended to distribute narcotics.

During his arraignment on Sept. 7, Deputy County and Prosecuting Attorney Daniel Reade advised that the state believes Powers poses a threat to the community.

“But for the fact that his probation officers managed to jump out of the way, he probably would have struck her with his vehicle,” Reade said.

In the affidavit, the investigating officer wrote that Powers, seen in a surveillance video, had been next to an exit when he appeared to purposefully drive in the opposite direction towards his probation officer.

Bartlett, who presided over Powers’ arraignment, set bond at $150,000 cash or surety.