A Montana man accused of stealing several vehicles and leading law enforcement on a dangerous pursuit that hospitalized a state trooper was bound over to District Court this week, court records state.

Great Falls resident Roger Forsman, 24, faces multiple felony counts of aggravated assault, theft, property destruction, and attempting to or causing bodily harm to a peace officer. He is also charged with misdemeanor eluding and driving under the influence of a controlled substance.

The charges stem from an alleged Aug. 18 incident where Forsman crashed a stolen 2015 Dodge Ram with a flatbed trailer into a Ford F-150 near mile marker 120 on Interstate 90 around 9:50 p.m., according to an affidavit of probable cause filed in the case.

The resulting crash caused both vehicles to overturn, ejecting and seriously injuring an occupant of the F-150 who was later Life Flighted, per the affidavit.

Another occupant in the Ford had not been seriously injured but was transported to Campbell County Health (CCH) for evaluation, the affidavit states.

The Dodge Ram had been reported stolen out of Buffalo, according to a previous statement from Campbell County Sheriff’s Office Lt. Paul Pownall.

When emergency personnel arrived on the scene, Forsman was already gone but was later found by a deputy on his way to investigate a report of a stolen 2021 Ford F-250 near Montgomery Road and Force Road, per the affidavit, which stated Forsman was reportedly driving the stolen pickup.

Forsman attempted to crash into the deputy, who managed to narrowly avoid the collision by driving backward and pursued Forsman eastbound onto I-90, onto Force Road, and eventually onto Hwy 50 where the suspect drove through fencing alongside Denbury Resources, resulting in significant damage, according to the affidavit.

A Wyoming Highway Patrol (WHP) trooper who was in the area responded to assist but was injured when Forsman reportedly crashed the stolen Ford into the trooper’s patrol vehicle, Pownall said.

Deputy County and Prosecuting Attorney Daniel Reade, who spoke during Forsman’s arraignment, said the trooper was transported to the hospital with a concussion among other injuries, though he was expected to return to work that same week.

Forsman reportedly continued northbound onto Hwy 50 and attempted to run over a Gillette Police officer who was attempting to deploy spike strips, per the affidavit, which states the suspect abandoned the Ford after the vehicle became stuck in a field near the High Plains Community Church and fled on foot.

He then allegedly stole a red 2020 Jeep Gladiator from the area of the Bell Nob Golf Course, where he allegedly crashed through a gate and caused over $1,000 in damage, according to the affidavit.

Crook County Sheriff Jeff Hodge advised that Forsman was taken into custody in Crook County after one of his deputies resorted to crashing a patrol vehicle into the Gladiator, thereby disabling it. 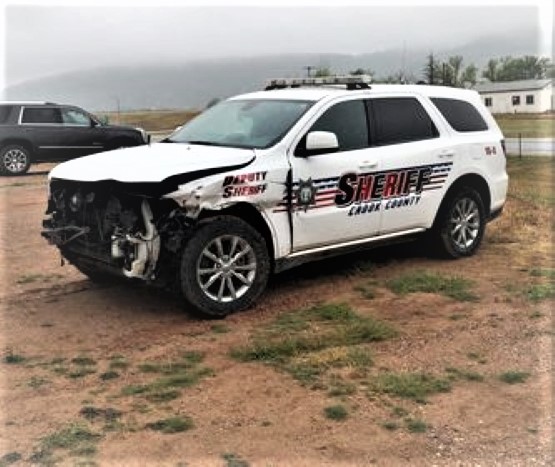 During Forsman’s arraignment, Reade requested that Circuit Court Judge Paul S. Phillips set bond at $250,000 cash only and stated that the state perceives Forsman as a significant threat to the safety of the community given the fact that he led law enforcement officers on a multi-county pursuit while allegedly under the influence of drugs.

“He did these things, your honor,” Reade said. “The evidence is overwhelming.”

Forsman objected to Reade’s characterization, stating that he has a recent pattern of good behavior and has been clean for several years while working as a licensed addiction counselor in Montana.

“It’s not like I’m out there doing this every day. I’m not,” Forsman said. “I made a mistake. I made a bad choice.”

“No, Mr. Forsman a bad choice is vegetables on a pizza,” he said. “You’re accused of an almost incredible number of criminal acts here.”