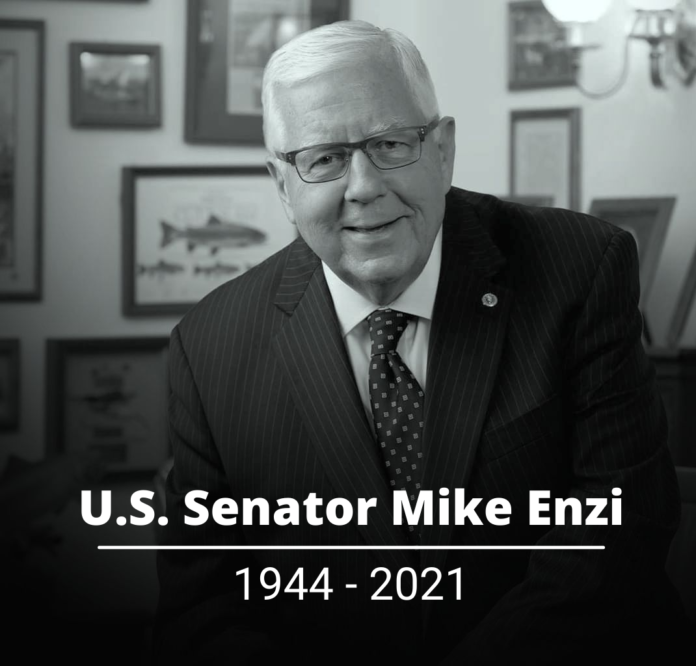 Former U.S. Senator Mike Enzi died late last night at age 77 from injuries sustained during a bicycle accident near his home in Gillette on Friday.

A social media post published shortly before midnight July 26 stated that Enzi passed away peacefully Monday surrounded by family after he never regained consciousness after being Life Flighted to Loveland, Colorado on July 23.

“His family expressed their deep appreciation for all of the prayers, support, and concern that has been shown,” the post stated. “They now ask for privacy and continued prayers during this difficult time. The family is planning to hold a celebration of a life well-lived, with details being shared at a later date.”

Enzi was severely injured on Morningside Drive in Gillette on July 23 while riding his bicycle around 8:30 p.m. He was found unresponsive when Gillette police officers arrived on the scene after receiving an Apple Watch alert that someone had taken a serious fall in the area.

Details regarding the accident itself were not released, though Gillette Police Lt. Brent Wasson stated on July 27 that there was no indication that anyone else was involved and that there was not an investigation underway.

A Facebook post from family friend John Daly states that the former senator sustained a broken neck, several other broken bones, and had not regained consciousness before being Life Flighted.

The news of the former senator’s death has triggered statements from local and state leaders alike, including Gillette Mayor Louise Carter-King who mourned the loss of a former mayor and mentor.

“He was a close friend of my family and his loss creates a void that will not be filled,” Carter-King said in a statement. “Even though we are saddened by his loss, we need only look around us to see the positive impact he had on Gillette.”

Enzi had served as the Mayor of Gillette from 1975 to 1982, during which time he was instrumental in the passage of the Optional One-Percent sales tax and the construction of the first Madison pipeline. His involvement with the Campbell County Chamber of Commerce and other Service organizations paved the way for his life in public service, per Carter-King’s statement.

“He knew what was most important for a successful community and he knew how to make it happen,” Carter-King continued. “It was his civic-mindedness for which he will be remembered. He was driven to improve our community from the moment he moved here.”

Wyoming Governor Mark Gordon, in addition to ordering both the U.S. and Wyoming flags to be lowered to half-staff immediately, issued a statement remembering both a personal friend and a dedicated public servant who cared deeply about Wyoming and its people.

“His leadership in the Senate was tireless and productive. He was a strong advocate for the state’s interests and was always committed to finding consensus where possible. He understood what is important for America,” Gordon said. “We are all heartbroken by this terrible loss. Jennie and I join the thousands offering their prayers and well wishes for Diana and the Enzi family. God Bless you, Mike. Thank you for your service, and Godspeed.”