Right now, the threat of feral pigs rooting through the wildlands of Wyoming is considered an almost non-existent threat by experts in the field who are paid to worry about such things.

Nonetheless, recent sightings of the invasive swine in northern Montana have some like David Stark wondering what will happen if the feral animals make it as far south of the Canadian border as Wyoming.

Stark, owner of Discreet Ballistics, an ammunition manufacturer that recently moved its headquarters from New Hampshire to Sundance, has firsthand knowledge of the havoc these hogs can wreak once they become established. Not only has he hunted them himself, he has also designed and sold a specific type of hunting ammunition for use by landowners and hunters throughout the South where feral swine run rampant.

There are reasons people like Stark don’t want the animals to crossing into Wyoming. First, they can carry up to 30 viral and bacterial diseases and nearly 40 parasites that can be transmitted to humans, pets, livestock and other wildlife. And second, according to the U.S. Department of Agriculture, they’re also known to be incredibly aggressive and rabid scavengers, causing more than $1.5 billion in damage each year to rangeland and natural water systems, crops, lawns, ornamental gardens and fences while also destroying pastures.

Currently, the USDA estimates there are more than 6 million feral swine throughout more than 35 states in the U.S., with the bulk of them – between 2 million and 3 million – found in Texas. 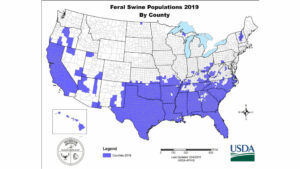 In fact, the feral swine have now invaded 253 out of Texas’ 254 counties, according to Jesse Griffith, a chef, hunter and feral swine expert who just released his book “The Hog Book.”

Feral swine aren’t indigenous to the U.S., Griffiths said, but rather were brought to Hawaii as a protein source by conquistadores at some point in the 1550s.

Nearly 300 years later, during Texas’ fight for independence, many domestic hogs escaped or were released, thus creating a feral swine population. These feral hogs went on to fraternize with the European wild hogs that escaped after being imported by ranchers and sportsmen in the 1930s.

Due to the mixing of breeds, there are very few true European hogs remaining, according to Colorado Parks and Wildlife. Colorado saw its own invasion of feral swine in the past three decades, but effectively eradicated the problem by allowing year-round hunting by sportsmen and land owners. Colorado Parks and Wildlife announced in February 2020 that the state had eliminated the problem entirely.

Texas, Oklahoma and other southern states have yet to make that claim, however, and the recent sightings on the northern Montana border may be an indicator that the feral swine could eventually make their way to the Cowboy State.

As both Griffith and Stark note, feral hogs are a problem not just for the potential damage they can wreak but also because they are hard to get rid of once they take root. Along with being prolific breeders, they’re hardy and have uncanny street smarts.

Once they leave a fenced area, Griffiths said, they almost immediately undergo a physiological change in which their snouts grow longer and they develop thicker hair — even former domestic pigs that escape.

“A feral pig is just a pig without an address,” Griffiths said

The feral pig problem in Texas prompted Stark to create the Feral Hog Death Squad, a data geolocation project to track the progress of hog eradication in more populated areas and those municipalities experiencing hog issues. The data thus far remains incomplete as the project went dormant during the pandemic.

Nonetheless, hunters and landowners in the South are among the largest customers for his patented 300 AAC Blackout subsonic hunting load. Apart from being quiet, the projectile made with machined copper expands at subsonic velocities to pack a great punch upon impact.

“Basically, folks need ammunition that is quiet and lethal, so as not to disturb during night time eradication activities,” he said.

Although feral swine have yet to make it into Wyoming, the state has policies to deal with the situation.

First, Wyoming has laws and policies that make it illegal to import any members of the Suidae family, with the exception of domestic swine and pot-bellied pigs, according to Sara DiRienzo, public information officer for Wyoming Game and Fish Department.

In addition, if feral hogs show up in Wyoming, the Wyoming Livestock Board has policies in place to deal with the invasion.

Right now, it’s illegal for landowners or hunters to shoot feral swine — the same laws now in place in surrounding states including Montana, Nebraska and South and North Dakota. In some cases, experts argue that allowing hunting actually makes the population harder to control.

In Wyoming, state law calls for the director of the Wyoming Livestock Board or state veterinarian to locate any feral swine after receiving a report of a sighting of the animals and notify the owner of the livestock, who then has five days to take possession of the livestock.

After the five-day mark, the animal is considered to be feral, at which point the agency may decide to destroy it.

To date, no reports have been received about feral swine, according to Wyoming State Veterinarian Dr. Jim Logan.

Logan said goats, sheep and the occasional domestic bison are the animals his department most often sees go rogue and join wild herds.

According to Logan, natural migration of feral swine to Wyoming isn’t a worry at the moment. His primary concern instead is of swine being introduced or released into the wild by humans, at which point the state would step in to help mitigate the spread of herds.

Still another debate surrounds the issue of whether feral swine meat is safe to eat — or tasty.

Stark says yes. He’s both hunted and eaten wild hogs and says the meat require a lot of marinating.