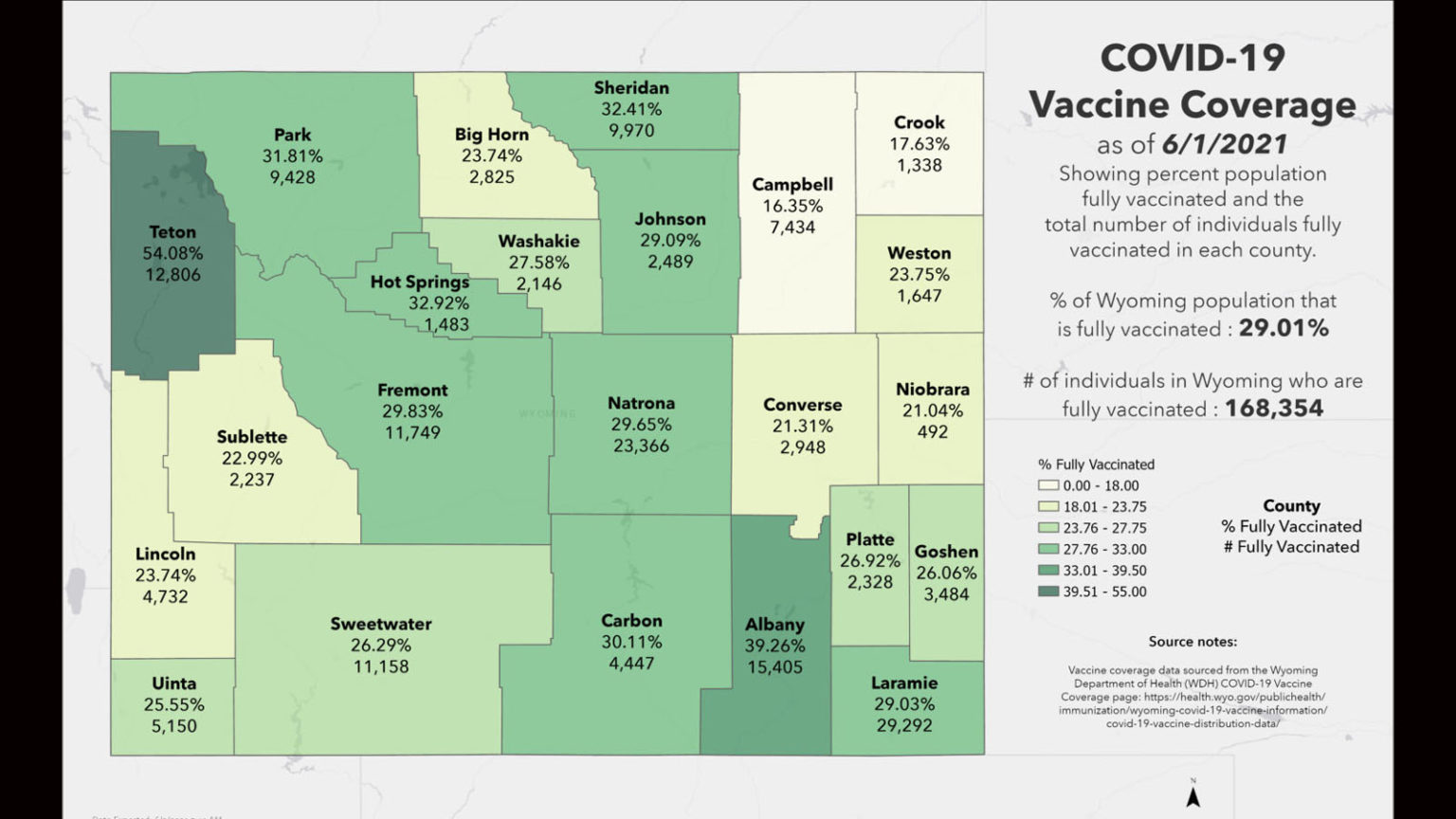 Talayna Duran has not received the COVID-19 vaccine nor has she given it much thought. The 18-year-old Gillette resident and recent graduate from Thunder Basin High School has started to put the pandemic behind her.

The last couple months of school saw mask requirements and other restrictions relaxed, and now, she’s not sure if she plans to get vaccinated.

“I don’t have anything against it,” she said with a shrug last Sunday from behind the reception desk at All Dimensions Fitness. “I mean, I would do it if needed or my job required it.”

Phillip Losinski was equally nonplussed about his plans to potentially get vaccinated. The 61-year-old Gillette resident said he’s a bit dubious about the conflicting data coming from the Centers for Disease Control and Prevention (CDC) in general and said he’d like to wait for another six months to see if any new information arises with regard to vaccinations.

“I’d like to do a bit more research,” he said, noting that he believes he had COVID in February 2020, before the illness was officially recognized, and thinks that gives him natural antibodies against the virus. “I’d like to give it at least another six months to see if there are any negative side effects.”

Others, however, like 22-year-old Jacob Dalby have no interest in ever being vaccinated. Dalby, who questions many of the CDC guidelines and science supporting them, pointed to the stated 98.54% survival rate for COVID-19 versus the 94%-95% efficacy rate of the vaccines in preventing the virus.

He also questioned the safety of the vaccines and the fact that they were rushed to market under the Emergency Care Act on top of the blanket immunity granted to the pharmaceutical companies under the National Childhood Vaccine Injury Act in 1986 to protect the companies from lawsuits in the event of adverse reactions.

All factors considered, Dalby said that neither he nor members of his family plan to get the vaccine, including his grandmother who is currently undergoing treatment for cancer.

These are common attitudes in Campbell County, which has the lowest vaccination rate in the state. According to the Wyoming Department of Health, only 16.66% of residents have been vaccinated, followed by 17.67% in Crook County. Conversely, Teton County has the highest number of vaccinations at over 54%.

The relatively low vaccination rate has prompted Campbell County to launch a COVID-19 vaccination campaign to build confidence in the vaccine and prompt residents to get vaccinated, according to Ivy Castleberry, public information officer for Campbell County Public Health.

Ideally, the county would like to achieve a 70% vaccination rate, Castleberry said by email Tuesday, in order to achieve community immunity.

She also noted that while the county county may be lagging when it comes too vaccinating the lower-risk population groups age 12 and older, it has seen vaccinations administered to almost 60% of the higher risk population in the county age 65 and older, with an average of 400 to 500 people getting vaccinated through CCPH each week.

“We would certainly like to see vaccination rates pick up again,” she said.

The county is still in the process of developing the campaign, Castleberry noted, and she couldn’t say whether or not it will involve similar incentives to those seen in other cities and states, most notably Colorado’s $1 Million COVID Vaccine Drawing.

WDH is already running a significant multimedia marketing campaign promoting the vaccines, Deti said, but has not yet discussed offering potential incentives.

“We want everyone who is eligible to get vaccinated,” she said. “The vaccines are doing their job very well.”

Deti noted that the majority of new coronavirus cases and hospitalizations are occurring among those who have not been vaccinated.

She added the WDH would like to see the vaccination rate increase, although she refrained from providing a target goal.

“There is no question we would like to see a much higher coverage percentage,” Deti said. “Without vaccination the risk of illness could remain for people and that’s what we’re focused on avoiding. So if our coverage rates remain low the risk for illnesses in Wyoming continues and that is disappointing.”

She cited issues such as the politicization of the vaccine and the relatively low level of new cases in recent weeks as threats affecting public’s perception of the need for vaccination.

“With schools and most businesses open, it may be harder for some people to see the personal need for vaccination,” Deti said.

For Dalby, it’s a lost cause, he said, reiterating his plan to not get the COVID-19 vaccination despite attempts to market it as safe and effective. To him, it’s just another misuse of taxpayer dollars that could otherwise be better spent.

“I got the shot for the swine flu back in 2010 but got it anyway,” he said. “I don’t see any reason to do that again. And you know what they say? If the government tells you to do something, you should do the exact opposite.”