Wyoming residents can afford to pay more in taxes, an analysis by the Laramie County Community College’s Center for Business and Economic Analysis argues, citing the state’s already-low tax burden and relatively inexpensive cost of living.

The analysis, which was drafted last December, was presented to the Joint Revenue Committee Monday as part of an interim discussion on the state’s tax structure. It expands on a 2020 Legislative Service Office study that compared Wyoming’s median tax rates to those in surrounding states like Nebraska, Montana and the Dakotas.

That study found Wyoming could generate more than $800 million in new revenues per year without hurting the state’s competitiveness with states, all of which have seen substantially higher population growth over the last decade.

The CBEA’s analysis — which the center’s director Nick Colsch presented to the Joint Revenue Committee — went further, analyzing variables like states’ median incomes and comparing Wyoming to places that also lack an income tax, like Texas.

Not only does Wyoming have the lowest taxes of these states, Colsch said, but it also has a substantially lower cost of living. Earlier in the meeting, Wyoming Director of Revenue Dan Noble told lawmakers the state has the second-lowest tax burden for a family of four in the United States. The state’s current tax structure, Noble said, could actually hinder the state’s growth due to the high cost of services and a thin tax base.

Like other energy-dependent states, Wyoming experienced some of the slowest GDP growth rates in the nation over the last decade, Colsch said, evidence that low taxes don’t necessarily equate to economic growth.

“In our view, there is capacity for Wyoming citizens to bear a higher tax burden,” Colsch said. 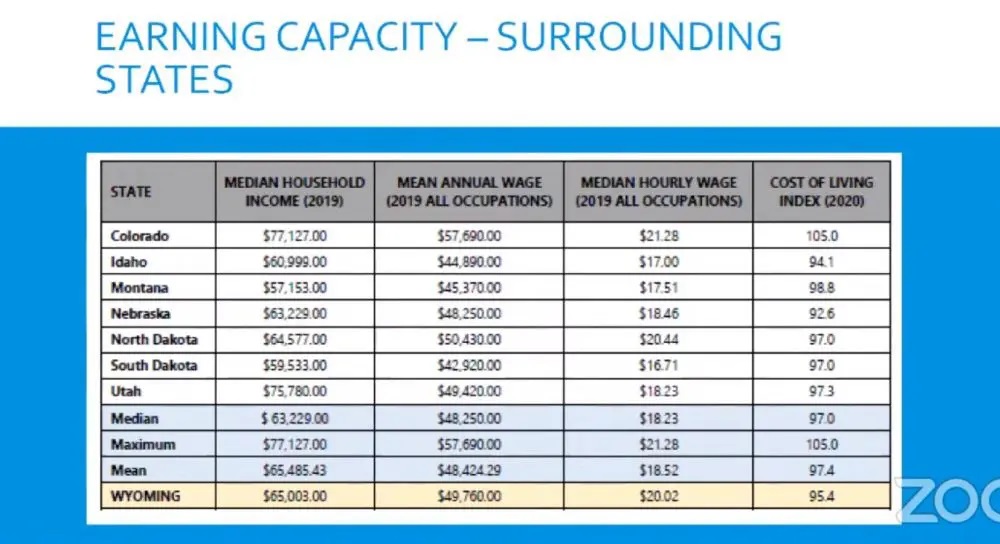 The state’s earning potential is significant, Colsch continued. By adopting South Dakota’s tax structure, Wyoming could generate approximately $1.1 billion in additional revenues per year. If it went “full socialist” and adopted the maximum tax rate for property tax, sales tax, fuel tax and others, Colsch said, the state could generate even higher revenues.

“If we really wanted to look at raising revenue, would we not want to look to encourage private-sector businesses to come to Wyoming instead of raising taxes, since that’s where the revenue comes from?” James asked.

Wyoming already has one of the most business-friendly tax structures in the United States, Noble said. Gov. Mark Gordon, who imposed significant budget cuts to make up for lost revenue in the last year, has reiterated that the loss of public-sector employees has already had a significant economic impact in numerous communities. All told, Wyoming has cut hundreds of millions of dollars in government expenditures over the last five years but experienced little increase in economic activity.

“If taxes are the only criteria that you use for bringing businesses to the state, (businesses) should be here,” Noble said.

Meanwhile, Wyoming’s fossil fuel-reliant economy has continued to languish in the aftermath of the COVID-19 pandemic. In his presentation to the committee, LSO fiscal analyst Dean Temte said Wyoming’s revenues from severance taxes and federal mineral royalties have declined substantially over the last several decades, while Wyoming’s declining revenues remain highly volatile. That pattern was only exacerbated in the aftermath of the COVID-19 pandemic, which hit fossil fuel revenues hard before prices rallied in late 2020 and 2021.

Lawmakers also heard evidence that Wyoming’s legacy industries can no longer pull the weight they once did. According to an analysis from the Wyoming Division of Economic Analysis Monday, mining revenues in April 2021 were down 73.3% compared to April 2020. The two economic sectors that saw the biggest improvement in that time period, public administration and retail, were “likely due to the recent federal stimulus checks,” according to fiscal analyst Dylan Bainer.

Further analysis from the LSO found that while some communities, like Teton County, saw relatively little tax volatility over the last decade, counties like Converse and Campbell experienced massive swings in revenue from year-to-year, largely due to their reliance on fossil fuels.

“Is this volatility? Or is that structural change?” Revenue Committee Co-chair Sen. Cale Case (R-Lander) asked lawmakers of the decline in mineral revenues. “Just putting that out there.”

While some areas of Wyoming’s revenue portfolio, like sales tax, are growing despite mineral performance, Noble said Monday the state’s reliance on minerals has had a “noticeable impact” across Wyoming’s economy. According to the LSO, the share of the state’s property tax revenues that consists of minerals has dropped by 20 percentage points over the last decade, largely due to declines in valuation.

Ron Sniffin of the Wyoming Education Association testified to the committee that the state is at a “crossroads” and must determine a course for its future centered around the creation of new revenue.

Some lawmakers, however, noted that Monday’s conversation is an old one that retreads decades of failed conversations about reducing the volatility of Wyoming’s tax structure.

“We’re well on this trip now … Very much well on this trip for the past five years, now that we’re losing that mineral base,” Case said. “And with global warming, concerns about CO2… [fossil fuel revenues] are not going to come back. So we’d better figure out where we’re going and how we’ll get there.”

With more jobs than workers, Wyoming grapples with ‘great resignation’