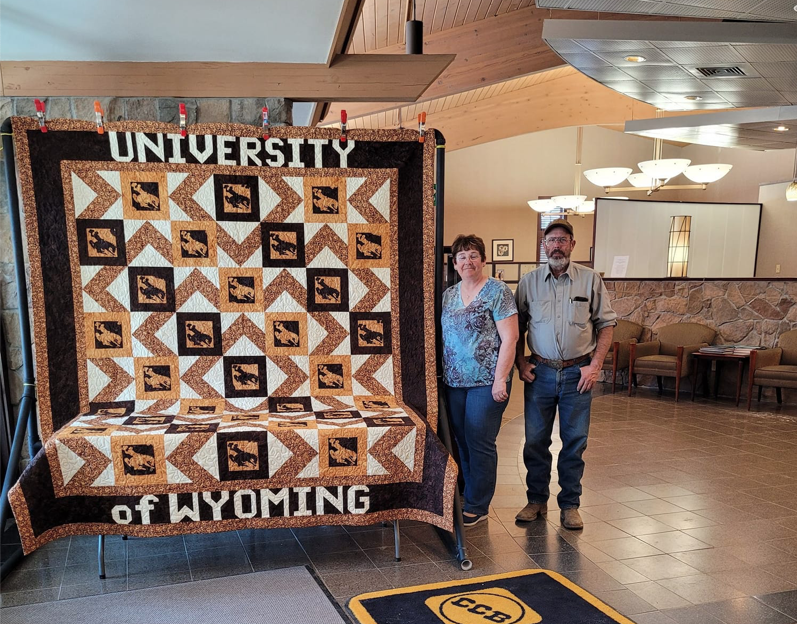 When Whit Stewart, University of Wyoming (UW) Extension sheep specialist, spoke with his long-time friends Russell and Kathy Bell about budget cuts to his sheep judging program, he was noticeably concerned.

But that didn’t last for long.

The Bells have long been hearty 4-H supporters in Campbell County, with Russell serving time and again as a volunteer wool judging coach.

“(He) will probably do it until the day he dies,” Kathy smiled. “He just absolutely loves it. He loves helping people out and when he found out Whit’s budget got cut, he said, ‘let’s find out how to make it easier for Whit.’”

Crafting a handmade UW Steamboat quilt and raffling it off to raise money for UW and 4-H wool judging programs was Russell’s idea, one that Kathy initially put off because she knew it’d be time consuming and fall was their busy season on the ranch.

But both of them knew that if they could help, they would, according to Johnathan Despain, UW Extension state 4-H program coordinator.

“Next thing I know we have a beautiful quilt on our hands that’s going to raise money for collegiate and 4-H wool judging programs,” Whit said. “It sounds cheesy, but I love how that embodies the type of people we get to work with. They identify a challenge, they are partners with us and they make it happen.”

It took about three weeks to make the quilt, Kathy said, adding that the project was fueled by their passion and support for state and Campbell County wool judging.

That passion and drive exhibited by the Bells is what encouraged Whit to become involved in wool judging in the first place. He met the Bells at the start of his career in Campbell County.

“They are the reason I became involved in wool judging,” he said. “It was that experience that allowed me, as part of my Ph.D. funding, to coach a wool judging team in New Mexico and it’s since blossomed.”

Now, the program has expanded its numbers and there are more colleges competing in collegiate wool judging than ever before, Whit said, expressing his gratitude for the Bells’ continued support.

Kathy’s king-sized creation will travel on display around the state. As of March 26, it was located at its first stop at the Converse County Bank in Douglas. Come April 5, it will be on display at First National Bank in downtown Gillette.

Raffle tickets can be purchased at any county extension office, from a UW wool judging team member or wool judging 4-H member, according to a UW news release. Tickets are $20 each or seven for $100, and the winning ticket will be drawn in September at the state ram sale in Douglas.

The money raised will be used to help counties across the state get practice wool.

Ryan Lewallen contributed to this story.