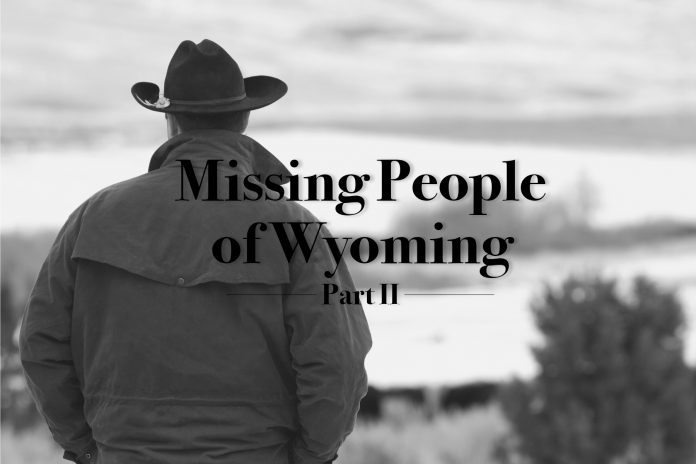 Dave Wolfskill is a guy who lives up to his name. A former policeman/detective turned private investigator, Wolfskill has devoted the latter part of his career to tracking down missing people. Now retired, he does it on his own time.

Old habits die hard, he joked, and now, he continues working with a dedicated group of private investigators, volunteers and bikers at We Help the Missing, a non-profit that he co-founded with Utah detective, Marki Davis.

Sitting at the Red Rock Café in downtown Hulett, Wolfskill sipped his coffee as he squinted  under the brim of his ball cap, talking about the work that drives him. He’s got a real heart for teenagers, particularly the troubled ones in foster care and those who run away from home.

He said he wanted to remain vague about some of these past cases, which involved tracking down teens in California, locating a kidnapped toddler as well as helping bring home a 15-year-old girl who ran away from home and inadvertently found herself caught up in a sex trafficking ring.

And though technically retired, Wolfskill still spends a lot of time on social media both as a volunteer with We Help the Missing and doing whatever he can to connect resources both in Wyoming and throughout the West.

He’s seen far too many teens with trouble at home reach out to strangers on the internet to fill the emotional void. Many of the missing cases seem to start this way, he noted, and many times kids or adults are suffering from substance abuse problems or navigating thorny psychological or emotional problems or suffering abuse at home.

In runaway cases, the first 48 hours are key, Wolfskill said. After which, runaways are likely to be targeted by a predator who is on the lookout for such vulnerability.

Wolfskill has become skilled at locating predators on sight, he said.

“It’s a look in their eye,” he said. “The way they watch or touch someone. It’s pretty easy to spot.”

And for all the cases he has solved, it’s the ones he didn’t that plague him, namely the 16-year-old Moorcroft teen, Shayna Ritthaler, who ran away to be with 17-year-old Michael Gavin Campbell of Sturgis, whom she met on a dating site. Campbell shot her in the basement of his mother’s home on their second day together after the two got into an argument.

It’s that second day that sticks with Wolfskill, who’d been one of the PIs on the case.

They had been close.

“I cried like a baby at her funeral,” he said, along with fellow Moorcroft detective Ed Ray who had also helped on the case. “Several of us did. It was awful. It’s hard on your emotions.”

Every missing person has a story, he said. They’re so much more than just a face on a poster.

Contrary to popular belief, there is no 48-hour mandatory waiting period within law enforcement agencies before a person can be declared missing.

Every agency has their own policy, including the Gillette Police Department (GPD), which does not dictate that officers have to wait any set amount of time prior to investigating, according to GPD Police Detective Christine Winterholler.

“Instead, the policy states once the officer determines the child is a runaway, the officer will take action such as completing a report, obtaining a signature from the reporting parent stating the parent agrees to arrange the return of the juvenile if located outside Gillette, and entering the child into the national crime database as a runaway,” Winterholler wrote in an email to County 17. “The policy continues on to state officers [who] will assist in attempting to locate the child.”

Some, like Woifskill, would like to see protocols put into place to create a standardized policy when it comes to runaways and those who go missing.

The lack of continuity with law enforcement and their protocol on missing cases is definitely a stumbling block from his perspective, Wolfskill said.

Feet on the ground

Everyone drawn to this work seems to have their own story. Amanda Waldron is no exception. For the 33-year-old Casper woman, it’s personal. Her younger sister ran away just before her 18th birthday with her then-boyfriend with whom she thought she was in love.

Fortunately, her sister’s story ended happily, Waldron said, with her returning a couple weeks after she left when she found out her family was looking for her.

This is another lesson that Waldron took to heart. After her sister left, the family had no idea where to turn. Once they filed a police report, Waldron and her family and friends unleashed their own search party, including scouring the internet for any traces of her sister as well as plastering missing person flyers all over town and on social media.

It worked. In fact, it was the online attention that ultimately drove her sister home as everywhere she went people started to notice her.

“She hadn’t thought much of it at the time,” Waldron said. “She just thought she was taking a little vacation with him and that nobody would really mind.”

Her sister’s disappearance left a lasting impression on her, and perhaps not surprisingly, Waldron now heads up the middle school expulsion program for Natrona County and also works as a PI with a paralegal certificate and a degree in criminal justice with an emphasis on juvenile delinquents.

Waldron is a volunteer at We Help the Missing where she’s known as the ‘bulldog’ or MAO (Most Awesome One). These are not nicknames she’s earned lightly. Along with a bloodhound’s ability to track down teens who go missing, this winter she also busted a pair of porch pirates attempting to lift Christmas packages and thwarted a robbery at the hotel where her sister works by stabbing the would-be-thief in the thigh with scissors.

She laughed off some of the more chaotic events in her life as all in a day’s work. Or night, depending, which is when most of the teens seem to go missing. One night at 8:30, Waldron processed an intake form for a missing teen right before heading out into the frosty night on foot to try to track him down. By 10 p.m., the teen had been found and she was back in bed.

She’s not above going into known drug houses or prowling dark streets and corners looking for missing kids. Once, she did a 36-hour, around-the-clock surveillance. She also has two blue tick coon hounds who she’s training to help her work missing person cases.

“I find them and bring them back,” she said modestly. “The boots hit the ground, and I go out and get them. You’d be surprised what happens when adrenaline takes over and you do what you have to do to get a kid home safe.”

The rate of missing kids in Casper is extremely high, she said, which she finds frustrating in that she feels law enforcement doesn’t always take cases of runaways seriously, particularly those with records or repeat offenders, who in many cases are running away from abusive homes or youth shelters.

A lot of the teens she tracks down are current or former students, most of whom stay in touch with her.

She also is seeing a disturbing trend among teenage girls connecting with older guys online.

“They think it’s cool to have an older boyfriend,” she said, “and don’t see it as people trying to take advantage of them.”

It’s a problem, she noted. Also, a problem is the number of women and teens caught up in drugs and prostitution between Casper, Gillette, and Sheridan.

“There are a lot of people who are still missing,” Waldron said, “and it’s important these people aren’t forgotten.”

Like the others who do this type of work, Marki Davis, who founded and now runs the non-profit We Help the Missing, is tireless in her pursuit and runs the group on top of her full-time job as a private investigator in Salt Lake City.

She personally got involved with finding missing persons as an apprentice working under a detective. It was this boss who gave her the hypothetical task of tracking down her husband’s grandmother who had gone missing in 1939.

The task was meant to be a practice run for the cub detective who attacked it like a dog with a sock.

Given the many years that had gone by, finding the missing German woman, who had immigrated to the U.S. during WW II, become a nurse and later left her family, presumably for California, seemed a bit daunting at first.

If finding a missing person in this day in the age of the internet isn’t hard enough, Davis was tasked with the old-school mission of tracking down documents and relatives, which included her going to Germany. After a long roundabout journey, Davis found a newspaper story about a red-headed woman who had been found by mushroom pickers somewhere in West Virginia. The photo of the woman matched her bosses’ grandmother.

Mission complete. From then on, Davis was hooked and continues her passion to track down missing people and cold cases.

It’s a small, dedicated group, many of whom run into each other on the ground such as she and Wolfskill, who met on a case in Utah and became fast friends.

To date, she thinks she’s easily worked around 100 cases, most of which don’t end happily, but like Waldron and Wolfskill, “it gets in your blood and there’s no letting go.”

The trouble is finding people to help them, and she continues to look for more private investigators and volunteers, because given the constraints on law enforcement resources, most of the cases go cold.

Each week, there are an average of four new missing people reported nationwide on We Help the Missing, with volunteers working non-stop to create posters, plaster them in an area or town as well as work the case on the ground.

“There’s not enough help,” Davis said, “but we are doing all we can for these families. The big thing is to let them know that they’re not forgotten, and somebody is still holding out hope they’re found.”