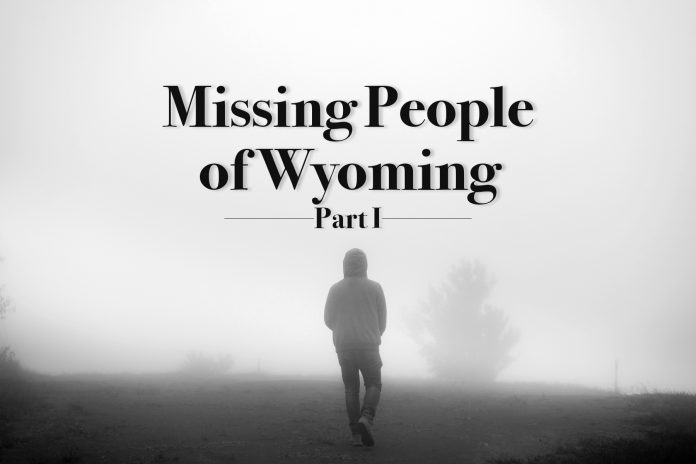 Imagine if your son left one day and never came home. Disappeared into thin air, never to be seen or heard from again.

This is exactly what happened to Dawn Englebert. Her son Chance, who was 25 at the time, disappeared during a weekend trip to Nebraska with his wife Baylee and their infant son. It was July 6, 2019. The couple had driven from their home in Moorcroft to spend the 4th of July weekend with Baylee’s family in Gering.

It’s unclear exactly what transpired, but according to Chance’s friends, there was some type of misunderstanding or fight with his in-laws after a day of golfing and drinking, resulting in Chance telling Baylee he wanted to go home, and ultimately, walking away.

He called several friends and family to get a ride but wasn’t able to secure one immediately given the distance from home. Calls and texts to Chance’s phone went unanswered. The last correspondence sent from his phone was a text at 9:08 p.m. The text made no sense: just a bunch of numbers and emojis. 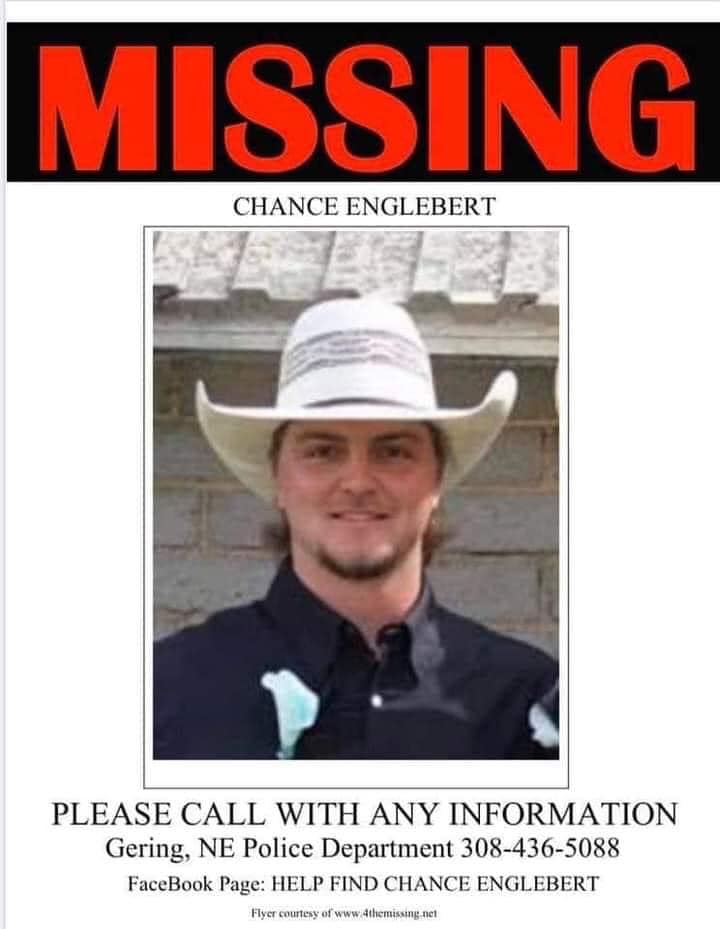 Chance never used emojis, Dawn said, so likely someone else had it.

He was last seen walking down the street a couple miles from his in-law’s house about 8 p.m.

His disappearance prompted multiple searches across 17 agencies and hundreds of volunteers, including divers searching the North Platte River as well as cadaver dogs, drones and searchers on horseback. Hundreds of tips turned up nothing, including a rumor that Baylee’s family might have been involved after it was reported they’d just poured fresh concrete.

“That was quickly debunked,” said Gering Police Department Investigator Brian Eads, who was with the Nebraska State Patrol at the time of Englebert’s disappearance but who has since joined the police department and has taken over the case.

As of Feb. 16, there have been no updates in the case, Eads said, though tips are still regularly coming in. On average, he and Gering Police officer Jordan McBride spend about 10-20 hours per week tracking down leads and tips.

“We don’t like to have unsolved cases,” Eads said, noting that he couldn’t comment about any current tips or speculations given that it’s an open case. “We’re still receiving calls about sightings and are looking into everything.”

He regularly consults with the FBI and continues to stay on the case, he said.

Dawn said appreciates their work as well as the cards and updates she receives from Eads and others involved, but it doesn’t make it any easier for the mom of three boys, who believes in her heart that somebody out there saw or heard something that could help locate her son.

No way he would have left on his own, Dawn said, a sentiment echoed by wife Baylee when interviewed by County 17 in the days following his disappearance.

“He’s an athlete and cattleman,” she said, who grew up working on the family’s ranch in Burdock, South Dakota. “He’s a man who loves his family and son.”

Englebert’s disappearance has fueled heated debate and speculation by many on social media, which has worked to divide both families, including Dawn’s communication with Baylee and her grandson, which has since broken down in the ensuing months since he’s been gone.

Likewise, Baylee has stopped talking to reporters and told the Rapid City Journal that she no longer grants interviews because she and her family get death threats.

Friends like Matt Miller and Dustin Easton and other advocates have devoted FaceBook pages to help locate Chance, including Help Find Chance Englebert, Chance Englebert, Daddy where are you?, Chances Are…? The truth will come out as well as several other private pages. Others still, have picked up his case in podcasts and various missing person crime programs, but thus far, nothing has panned out or led to any arrests.

Despite all the help from law enforcement and others, Dawn can’t help thinking that there would be a lot more urgency to find a young woman or a child who had gone missing and that 25-year-old guys like Chance, particularly because he’d been drinking, don’t raise the same alarms.

There are others, too, who went missing within the same approximate timeframe and area as her son, Dawn noted.

In both cases, they were men in their 20s with a history of drinking or drug use and slight skirmishes with the law.

Similar cases
In February 2019, a Colorado-area man also vanished after crashing his pickup into a guardrail on Highway 285 in Indian Hills, outside Denver. Jacob Paddock-Weeks, now 27, was seen running from the accident after leaving both his cell phone and wallet in the car. Drug paraphernalia had been found in his vehicle, but the crash was thought to be the result of a mechanical problem with a tie rod, according to reporting by Fox 31/2 News Denver.

A Facebook page for Paddock-Weeks indicates he is still missing.

Prior to that, a Nebraska man, 28-year-old Christopher A. Loupin, also went missing under mysterious circumstances in mid-November 2019 from 4 Seasons Campground north of the Elm Creek interchange near Kearney. He, too, seemingly vanished into thin air after last being seen at the campground in shorts and a T-shirt.

According to Nebraska TV News, Loupin and his father Eddie were spending the night at the campground where they’d been contracted to work on a project.

Loupin had reportedly been acting erratic that night, his father told investigators, and he finally came out around 1 a.m. the morning of Nov. 17 and told his son he needed to get inside and get some sleep after he saw him outside smoking. In the morning, his son was gone.

Loupin, like Paddock-Weeks, was not dressed for the weather and disappeared without a cell phone or coat.

The list goes on, and some, like PJ Chavez, has taken an interest in these missing person stories in his podcast and Facebook page. Despite the attention on their behalf, the three men still remain missing.

Wyoming in top 10 states with missing people
According to the National Missing and Unidentified Persons System (NAMUS) database, there are more than 600,000 individuals who go missing in the United States each year with an estimated 4,400 unidentified bodies recovered. Tens of thousands of those missing individuals remain gone for more than one year, at which point many agencies consider them “cold cases.”

Of the people currently missing in the U.S., approximately 60% are male and 40% are female, per NAMUS data, with the average age being 34 at the time of their disappearence. As of January 2019, there were 106 children missing who were younger than a year when they disappeared.

The more rural states seem to have this in common.

Currently, in Wyoming there are more than 50 open missing person cases, according to NAMUS datal, four of which include three men and one woman from Campbell County.  Given its wide-open spaces and relative low population, perhaps it’s not surprising that so many people go missing in Wyoming.

For Casper resident Desiree Tinoco, it was the number of missing people that caught her attention, particularly men who she thinks don’t garner the same level of attention as children or women, especially those with substance abuse issues or criminal histories.

She remembers seeing a story about a missing man from Washington, D.C., who disappeared in Big Horn County this summer.

“How does that happen?” she said. “How do people just disappear?”

The question stuck with her, and despite having no experience in the field or any missing people in her own life, Tinoco took it upon herself to do something to help. After discovering that Wyoming doesn’t have a missing persons database, unlike many other states, Tinoco decided to start a page on Facebook called Missing People of Wyoming, which has been active for just about 18 months.

Her main motivation for starting the group was to spread awareness about missing people by sharing their flyers, she said, as well as drawing attention to the cases that don’t garner as much urgency, such as men with criminal pasts or addiction problems.

“Those people are someone’s son, father or brother,” Tinoco said. “Someone is worried about them.”

Now, in the nearly 18 months since starting the group, it’s grown to almost 8,600 members, and Tinoco is feeling a little bit out of her league. On average, the site has about 50 missing people they are tracing. As such, she spends a lot of time trying to follow each case and provide continual updates as well as take down the posters in cases where the missing individual has been found.

She said she’d also like to see the state step in and create its own database to help locate the missing.

“I find myself trying to give advice that I’m clearly not qualified to give,” she said, noting the clear need for such a resource in Wyoming.

In December, Tinoco was asked to give a presentation to the Casper City Council, which was her first public speaking appearance and admittedly a little daunting. Nonetheless, Tinoco held her own as she explained that the lack of a state-wide missing persons database leaves it up to private citizens such as herself.

“As private citizens, we are underqualified and underfunded in overseeing such a task,” she explained, noting her belief that it’s an issue chronically overlooked by both the general public as well as local and state government. The task shouldn’t fall on the hands of people like her, she said, though she felt extremely blessed to be able to do her part to help.

Nonetheless, she’s only one person.

There are others, too, who have devoted their lives to tracking down the missing. Stay tuned to Part II of the series on Sunday to read about how law enforcement and a cadre of private detectives are working to locate the missing in Wyoming as well as the protocols regarding runaways.