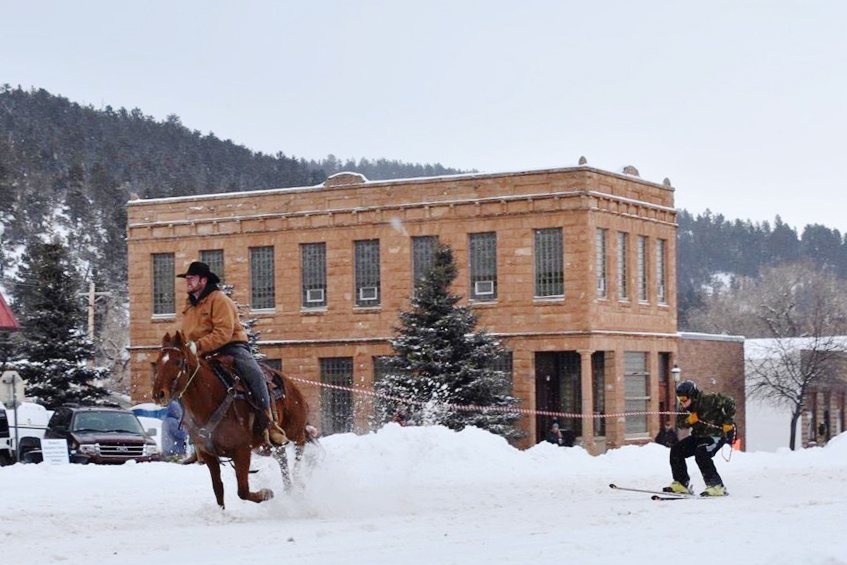 Rider Jack Greer pulls a skier in a skijor derby in Sundance.

Rumor has it: some guys were drinking beers and thought to pair good skiers with good horses and good riders, and skijoring was born, according to Jack Greer, a fourth-generation Gillette native. Jack, along with his dad, Randy Greer, and friend, Tommy Ford, thought to bring the event to the area.

But the term “skijoring” actually comes from the Norwegian word for “ski driving,” per Thrillist.

According to Nancy Knutson, director of marketing and communications for the American Birkebeiner Ski Foundation, skijoring has been around for centuries, going back to a time when animals and skis were both commonly used for basic transportation, the Thrillist article stated.

At its core, the winter sport is a mix of cross-country skiing with a fun towing agent like a horse, dogs, or a motorized vehicle of sorts.

“It’s what you get when you put the cowboys and the hippies together to have a good time and compete,” Jack said Tuesday from Cody. “To much surprise, they’re all a lot alike.”

Similar events are regularly hosted in nearby Sheridan and Sundance, but never before in Gillette, said Ford.

The first-ever Gillette Skijor Derby will be held this weekend in the grassy field southwest of the Cam-Plex Heritage Center Theater on Saturday and Sunday beginning at 10 a.m. each day.

“With not much going on for the last year, we’re expect a good turnout,” Ford said, noting that Pokey’s will be there with their food truck, two alcohol vendors will be present, and it’s free for spectators to attend.

There will be five divisions including snowboard, powder puff ski or snowboard (for the ladies), young guns (for those 17 and under), a classic, and an open division (18 and over), and all are welcome to come on out, Ford said.

Entry fees will be jackpotted with a percentage paid to the average winners of each division. The event is free for spectators.

“It’s all about good people coming together for a good time,” Jack said. “The entire community has really come together, along with our generous event sponsors, to pull this off. It should be a whole lot of fun.”

Register online or in-person Friday night from 5 – 9 p.m. at the Ramada Plaza.