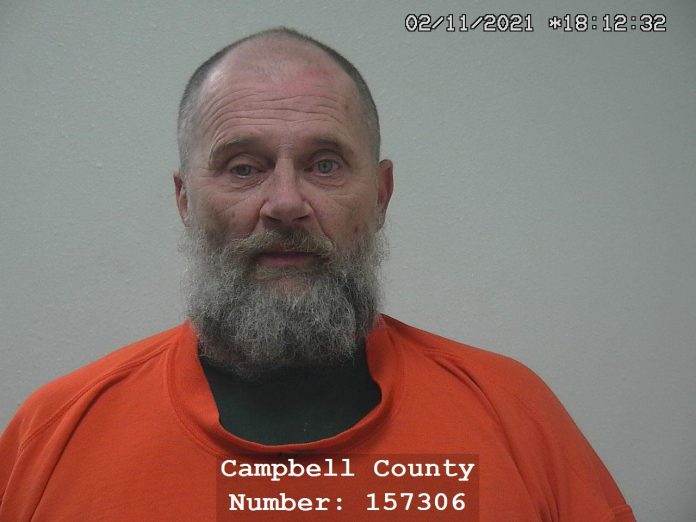 Campbell County resident Roger Gilmore, 59, has been charged with attempted murder and could face life imprisonment or death if convicted of stabbing a friend in the neck with a knife, officials said Friday.

Gilmore was arraigned before Campbell County Circuit Court Judge Wendy Bartlett Feb. 12 on charges stemming from an incident in which he which occurred near Quincy Road north of Gillette, where he allegedly stabbed a 33-year-old male during an altercation Feb. 11, according to an affidavit of probable cause filed in the case.

“This crime is about as serious as it gets without somebody actually having to die,” said Daniel Reade, deputy county and prosecuting attorney for Campbell County.

The affidavit stated that Gilmore was intoxicated and argued with the victim, a 33-year-old male, regarding an ongoing relationship between the victim and an unidentified female.

Gilmore allegedly stabbed the victim in the left side of his neck with a four-inch folding knife while the two were sitting in Gilmore’s vehicle in the driveway of a residence near Quincy Road. After stabbing the man, Gilmore reportedly went to a neighbor’s house to report the incident to law enforcement, according to the affidavit.

When he arrived at the residence, Gilmore was in tears and asked over and over if the victim was okay, per the affidavit.

Gilmore surrendered to Campbell County Sheriff Office (CCSO) deputies without incident at 5:15 p.m., the affidavit stated, though Gilmore became increasingly agitated when the unidentified female came out of the residence, saying “That’s why I did it” and calling the 33-year-old male a “child molester” that needed to go to prison for the rest of his life.

Gilmore reportedly made several threats to stab the victim in the heart next time and would kill him when he got out of jail while seated in the back of a deputy’s patrol vehicle, according to the affidavit.

During this tirade, Gilmore also attempted to shatter the rear window of the patrol car and destroyed a rear facing camera while demanding the deputy “shoot him in the head,” according to the affidavit.

Witnesses at the scene informed deputies that the victim had gone to the hospital after witnesses declined to “stitch him up,” though they did assist with stopping the bleeding, court documents state.

The 33-year-old male was later contacted but was not cooperative with the investigation. Witness statements allege the victim intended to attribute his neck injury to a grinder wheel and not to being stabbed when he got to the hospital, according to the affidavit.

Gilmore was originally charged with attempted manslaughter following his arrest, but the charges were revised to reflect first degree attempted murder, given the fact that Gilmore showed premeditated malice and took substantial steps toward that end, according to charges read by Bartlett.

As such, Bartlett said, attempted murder carries the same penalty as murder itself, meaning that Gilmore could face the death penalty, life imprisonment without the possibility of parole, and could be ordered to pay a $10,000 fine if convicted.

Gilmore is also charged with misdemeanor destruction of property, punishable by six months in prison, a $750 fine, or both, and could be required to pay restitution, Bartlett said.

Bond was set at the prosecution’s recommendation of $150,000 cash only given the seriousness of the offense and Gilmore’s criminal history stemming back to 1981 to include violating parole, kidnapping, sexual assault, robbery, forgery, among several others.

No criminal charges to be pursued in Campbell County library saga