The rows of paystubs on the bulletin board serve as a pretty good motivator, Tyler Sasse said. Some are from his early years as a welder, but most have been sent by former students who have since graduated from Western Welding Academy, the school he founded about a year-and-a-half ago.

There’s no debating that welders can make good money, Sasse said, but they’ve got to be willing to put in the hours and work. In many cases, they’ll have to travel.

“It’s not for the faint of heart,” he said, “but you can definitely make a decent living.”

It’s one of the few careers where it doesn’t matter how well you did in high school, Sasse noted, adding that he’d dropped out at age 16 and sought an equivalency. Now, after years in the field during which he worked on some of the county’s largest construction projects, Sasse has returned back to Gillette, where he’d lived once before in his early 20s, to open the school that is designed to put welders to work.

“It’s the only industry where a high school dropout can make more than his doctor,” Sasse said, noting that a person has to want to work for it.

Sasse waved to a cluster of guys hovered around a picnic table on a break, talking amiably with face shields lifted in one corner of the football-field size training building. In less than 30 minutes, they’ll disappear back into one of the dozens of workspaces behind the blue and red curtains where they’ll learn to use Miller or Lincoln equipment.

About 90% of students come from out of state, Sasse said, from all but three states, including Alaska, Maine, and Hawaii. Since opening the school, admissions continue to grow by word of mouth and social media exposure, including guest video lectures from big-name YouTube welder sensations like Austin Ross.

Yes, even welders have their celebrities.

The popularity of the progam, Sasse said, stems from the academy’s practical approach to training welders and getting them to work. They strive for 100% job placement, he said, without the need to take on a lot of debt. Unlike other similar technical certificate programs, Western Welding Academy does not accept student federal loans and instead offers a tuition repayment program that requires a small down payment with funds repaid once the student starts working with payments based on a percentage of their salary.

Because the academy is not part of the state-wide accredited college system, credits cannot be transferred either to or from any other institution, he noted.

This was an intentional decision, Sasse said, because their program is modeled on a real-life job site, where students are trained on simulations mirroring that of a pipe rack or other real-world applications that welders are likely to experience on the job.

It’s this spirit that Sasse instills in his students, that and his love of country and all things American made.

Sasse showed off the school’s leather gloves and other welding gear given to the students as part of their fees that was made in Texas. Hats and welding helmets also are American made. And every day begins with the Pledge of Alligience.

It’s not a theme that Sasse takes lightly in a country where he believes anyone can make it as long as they apply themselves. One of Sasse’s favorite expressions, which he quotes several times during his tour of the facility, is that you can be anyone you want to be if you work for it and believe that you can.

They also set a high bar when it comes to testing for certification, which Sasse says ensures they are churning out the best welders in the field.

He pointed to a cylinder sitting on a workbench that had been welded to a nuclear grade, the highest quality weld. It had been welded by 18-year-old Jake Ford from northern California, who Sasse said is already looking at one heck of a career.

The school offers five courses where students can gain certifications in a variety of fields, including shielded metal arc welds for beginners, shielded arc welds on pipe, carbon steel plate and pipe welding, advanced GTAW and SMAW pipe and a 24-week professional pipe welder course that covers the gamut.

Certification programs start at $5,350 for a five-week Welder 1 certificate and up to $20,560 for all four certifications in a 24-week program, amounting to a 20% discount, he said.

Sasse runs the school like a job site. Students clock in for their shift – either morning or in the afternoon – and follow the self-paced curriculum to earn up to four welding certificates. The program is designed around the student’s abilities, skill level, and how much time they put in. There are no set semesters or program deadlines with new students starting every week.

The harder they work, the faster their turn-around time, Sasse said, with a curriculum focused on maximum welding time and training on pipe racks and other installations that they are likely to encounter on the job.

Sasse pointed to a student who was bent like a pretzel underneath a stack of pipes, teetering awkwardly with torch flaming to hit a behind-the-corner spot that required both skill and flexibility.

“They’re going to have to hunch down like that and work in some pretty uncomfortable situations,” Sasse said. “We want to train them to be job ready.”

That’s the big difference between his school and other welding certificate programs, he said.

Also, the each of the school’s instructors have put in years in the field and have a wealth of first-hand knowledge and experience working on a multitude of projects in different fields and industries. There’s any number of opportunities for welders in any number of fields in manufacturing facilities and plants from companies making toilet paper to off-site drilling rigs, he said.

Sasse likewise sees Western Welding Academy as more than just a place to train the next generation of welders for work in fields beyond just the energy sector.

He also hopes the school will attract industries to come to Gillette by providing them with a skilled and able workforce, which is one of the biggest drawing points when it comes to companies from a wide range of industries such as computer chip manufacturers, pharmaceutical companies or carbon capture or carbon-to-product industries, he noted. 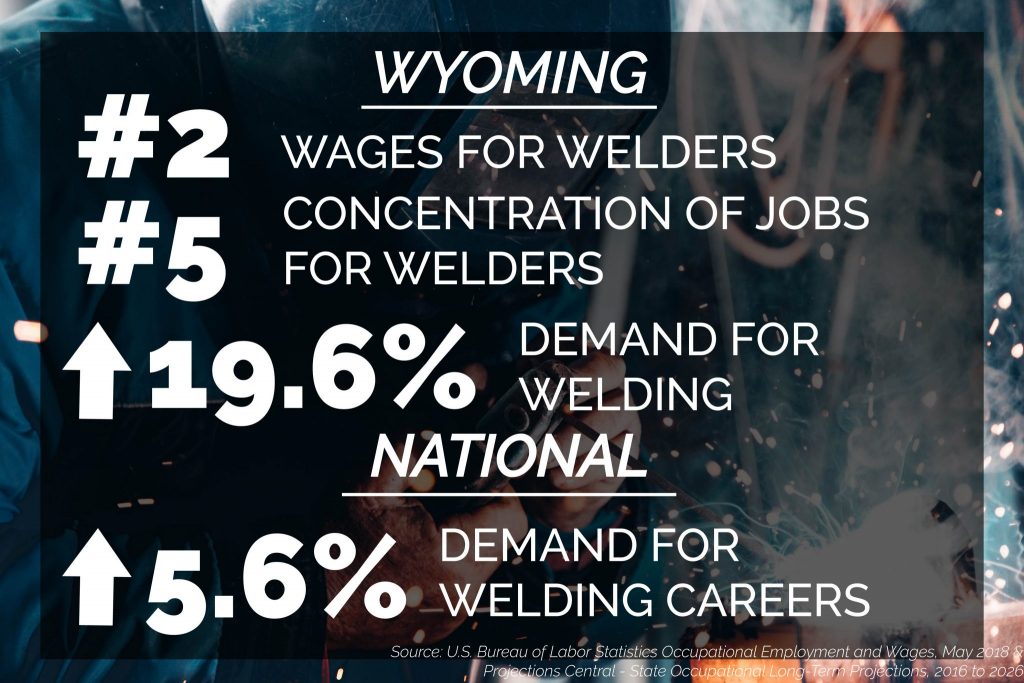 “If we are able to provide skilled workers, then they have a bigger incentive for wanting to relocate,” Sasse said, using Weatherby as example after they moved their California operation to Sheridan two years ago.

“We’re trying to help people,” he said, “while also bringing new industries to the community.”