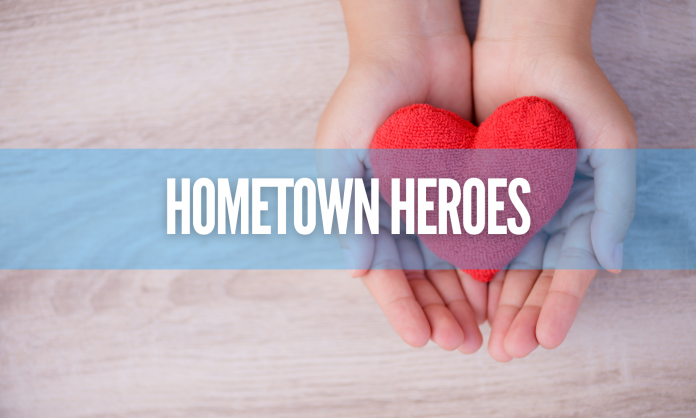 Heroes come in many forms, but we see them as people who go above and beyond to be a positive force in the community through their actions, words or deeds whether grandiose or subtle. County 17 believes in celebrating these heroes and their selfless contributions to the community with our new Hometown Hero series.

Each month, we will bring you some of these stories. If you know someone who stands out in a crowd, feel free to send us their name and contact information at tips@county17.com.

When the staff at American Track couldn’t figure out how they wanted to spend their safety bonuses last quarter, heavy equipment truck driver Matt Sherman had an idea. Typically, the company matches the bonuses in the form of gift cards, hoodies, T-shirts, backpacks, reflective coats or other similar items on which they vote as a group. This time, however, nobody seemed to agree on anything, so Sherman suggested they donate the money.

“All hands shot up in the air when I suggested that,” Sherman said. “I couldn’t get anyone to raise their hand for a hoodie.”

Instead, they were all really excited, he said.

They decided to give their contribution to the Council of Community Services Food Pantry because food insecurities resonated with everyone. Webb had asked the crew if they’d ever used the pantry themselves or knew anyone who had. All agreed that they’d been impacted by poverty in one way or another.

The management at American Track, which is a national railroad contractor with eight locations throughout the U.S., thought it was a great idea and kicked in their half to match the employees’ roughly $50 – $75 bonuses.

This gave them $1,400 to spend, so they asked the council for a list of items in short supply.

On Monday, Sherman and co-workers Payne Stewart and Marcus Houncker “got to play Santa Claus” in a whirlwind shopping spree that took them more than three hours with stops at two grocery stores.

They were charged with buying “healthy stuff,” Sherman said, so they loaded up their multiple carts with low-fat, low-sodium and whole grain pastas, breads and other non-perishables.

“We ran around the store three times looking for the stuff we’d already passed,” Sherman said, laughing. One guy loaded and checked off the list as the others punched numbers into a calculator.

They had it within a couple dollars by the time they checked out, and the only item they couldn’t find on their list was chickpeas.

“What are chickpeas anyway?” Sherman wondered. Regardless, they couldn’t find them, but otherwise, had covered the whole list.

After what Sherman described as a “whirlwind shopping spree and his most extensive grocery excursion to date,” the crew made their delivery and helped council staff unload the dozens of bags.

“You know, it feels good to give back and help others,” Sherman said.

He’d been raised with good ethics, he said, and had been touched by how many people – including strangers – had helped them out after his wife Stacey was diagnosed with stage four cancer. This Christmas, the couple had the opportunity to dress up like Mr. and Mrs. Claus and deliver candy to children in need over over in Sheridan. He found it was a role he really liked and looks forward to doing it again.

“This is just a generous community,” he said, including his coworkers and bosses, who he described like family. And though Sherman technically spearheaded the effort, he gave all the credit to the two guys who shopped with them as well as the company and staff.

“They’re the real heroes,” he said.