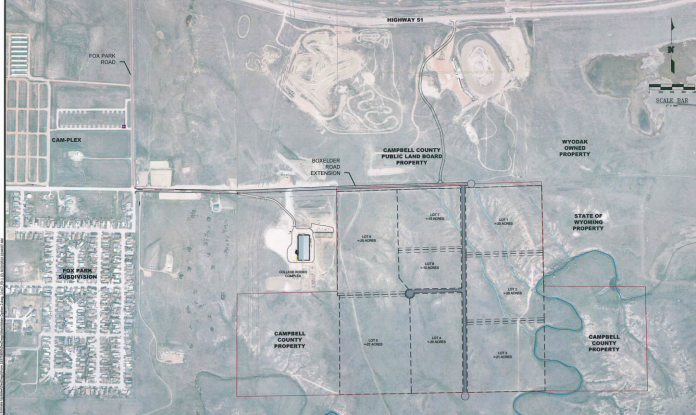 The Campbell County Board of Commissioners is nearly ready to begin turning a 160-acre plot of land east of Gillette into the county’s first multimillion-dollar industrial park, a county official said Thursday.

The Pronghorn Industrial Park, which the 160-acre plot of developed land could be named, will give coal-to-product companies a viable location to build their businesses, according to Ivy Castleberry, Campbell County public information coordinator.

The land is part of the 250-square-acre plot purchased by the county in 2014 from Wyodak Resources Development Corporation. The goal of the purchase was for building a commercialized area for companies seeking to establish long-term business operations for coal-to-product concepts.

The plot of land is located east of the Gillette College Rodeo and AG Complex, spanning south for several dozen acres, and stopping short of land owned by the Campbell County Public Land Board to the north.

The area is deemed appropriate for large-scale industry that will minimize any adverse effects such industry could have on residential and entertainment areas, according to Castleberry.

“It would be an important aspect to being able to diversify our economy,” Castleberry said, adding that economic diversification had been on the minds of the board of commissioners a lot lately given the latest presidential election and the current state of the mineral extraction industry.

The need for economic diversification has been exemplified by the commission’s recent letter to the U.S. Economic Development Administration (EDA), pledging $176,000 to Energy Capital Economic Development for the construction of the Wyoming Innovation Center (WyIC), a facility that will give prospective companies a place to develop and commercialize coal-to-product concepts.

However, there is little incentive for these companies to take their commercialized products and establish business operations outside of Campbell County once they developed their technologies at the WyIC facility, which is where the county’s latest development plan comes in.

Ultimately, the long-term goal of the industrial park is to move Gillette from a thermal energy dependent community to an innovative carbon technology development and industry community, according to a report from Lone Tree Academics submitted to the commission in June 2020.

The report contains figures loosely based on similar economic stimulus efforts occurring in Silicon Valley in California, where economies are allegedly experiencing growth from an influx of new “scaleup” companies, according to Castleberry.

Scaleups differ from startup companies in that much of the uncertainty and unpredictability is gone, given that scaleups have already determined their product’s viability in the marketplace and have proven economic viability, according to an article published on Rocket Space.

The WyIC provides the right environment for scaleup companies to emerge once they have their products lined out, and if even one emerges from the WyIC in the coming years, it could generate 150 jobs in Campbell County with average annual earnings of $50,000 each, according to the Lone Tree Academics report.

The jobs would replace only a fraction of the 4,241 jobs reportedly at risk should the mineral extraction industry go kaput in the coming years. These jobs will come from the mining, quarrying, and oil and gas, and transportation and warehousing sectors. Technical, professional, and scientific services are also expected to take a hit.

But if the Carbon Valley concept is successfully undertaken by Campbell County, there is potential far above and beyond simply one scaleup company emerging from the WyIC.

There could be 15, the report estimates.

In total, these 15 potential scaleups could potentially generate 2,250 jobs for Campbell County and recoup nearly half of the earnings lost from the mining sector, according to the blueprint.

However, the 15 scaleups are, for the moment, just figures on a spreadsheet as no companies have currently been identified as potential suiters for the Pronghorn Industrial Park, Castleberry said, adding that just one company utilizing one of several 20-acre plots allocated in the park would make the effort worthwhile.

Originally, the county attempted to secure the $3.6 million through the federal CARES Act, but the program ran out of money too quickly. Now, the county is preparing an application to submit to the EDA, under a special fund reserved for aiding coal communities impacted by economic downturns, per Castleberry.

Unlike the CARES Act, however, the EDA requires a cash match for any grant approved by the federal agency, which means the county had to expand its search for additional funding seeing as they lacked the pocket money for capital construction at the time of the Lone Tree report.

An application for the cash match funds is to be submitted to the Wyoming Business Council (WBC) in the coming weeks or months, Castleberry said.

Should the funding be approved, the $3.6 million will enable the county to begin the first of three phases of construction for the industrial park. The phase will entail installing water, sewer, gas, and electrical lines as well as potentially adding an extension on the east end of Boxelder.

“We want to get it so that it’s build-ready,” Castleberry said. By doing so, she noted, Campbell County could make itself a desirable location for industrial business looking to begin constructing their facilities within a ready and established location.

As for when the project is expected to begin, Castleberry was unsure, advising that receiving a green light for the funding from the EDA, which is entirely dependent on the other application’s approval by the WBC, could take several months.