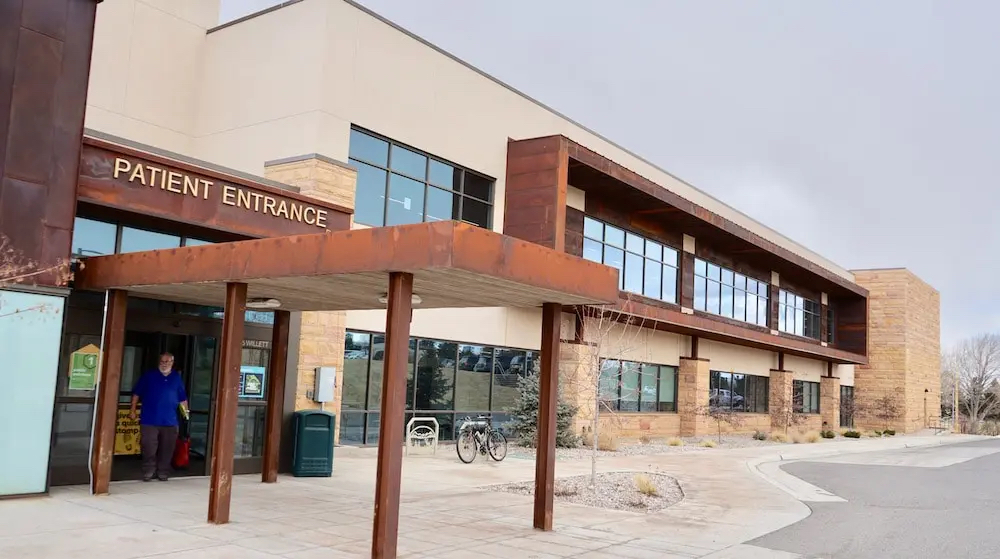 A man leaves the patient entrance of Ivinson Memorial Hospital in Laramie in March. Hospitals will have more time to complete construction projects funded with CARES Act money if a new stimulus bill passes (Photo courtesy of Andrew Graham/WyoFile).

A new federal stimulus package will aid Wyoming residents and businesses and fund COVID-19 vaccine distributions but does not appear likely to include direct financial aid to the fiscally challenged state.

U.S. House and Senate leaders on Sunday night reached agreement on the broad strokes of a deal that has eluded Congress for months, according to various national news reports. Lawmakers were working to vote and send a bill to the president by Monday evening.

The bill will extend a Dec. 30 deadline for Wyoming to allot $1.25 billion in aid it received through the March CARES Act. The state completed its allocation of the money and intended to make the deadline with a sprint of accounting over the next two weeks, according to Gov. Mark Gordon’s policy advisor Renny MacKay. The new bill will provide breathing room for that work and perhaps a chance to reassess some distributions of the remaining funds, he said.

As of Dec. 16, the state had spent around $811 million of the $1.25 billion it received in March, according to Wyoming State Auditor Kristi Racines. The governor’s office, however, had allocated all but $12 million of that package, MacKay told WyoFile, and was on track to meet the original deadline for distributing the money.

Money did not need to be spent by Dec. 30, but instead “encumbered” for various uses, MacKay said, and the state would then have had 90 more days to invoice and account for those expenditures.

Still, Congress’s delay in passing new legislation that extended the deadline handicapped the state’s ability to use the money in the most effective way, MacKay said. Almost since the CARES Act passed, Gordon had joined other state governors calling on the federal government to loosen the restrictions on the money and extend the deadline as states confronted growing financial and economic crises.

Officials from local governments, hospital systems and the state had been scrambling to spend the money in ways that met the timeline. Projects to help local governments and hospitals and to extend broadband internet had been ditched because they wouldn’t make the spending deadline, MacKay said.

Hospital administrators and some lawmakers have been critical of the state’s distribution of the CARES act money. The Legislature and executive branch threw up too many hurdles out of concerns of an eventual federal audit, these critics contend, and were slow to make money available. Though Congress passed the first stimulus package in March, the Wyoming Legislature did not meet to appropriate the money so that Gordon could spend it until mid-May.

In October, the chief of the state’s hospital administration told WyoFile that state officials didn’t award hospitals the funds until mid-July, and many hospital administrators weren’t willing or able to make expensive investments without knowing they would be reimbursed.

Hospitals around the state had been rushing to complete construction projects by the Dec. 30 deadline to ensure they would be reimbursed with the CARES Act money, Wyoming Hospital Association director Eric Boley said. Because of delays — including COVID-19 circulating among contractors — some hospitals were scrambling to complete the work and some administrators worried they would not be reimbursed for the money they’d spent on the projects, Boley said. “That’s been my major concern,” he said.

Though the deadline had impacted what projects hospitals pursued and relief came late, “we’re just grateful that it finally came,” Boley said. Now, the state’s hospitals “have the ability to get a lot of things completed that were in the pipeline.”

The new package does not provide any direct aid to states like Wyoming that face budget challenges, according to the national press. As it stands, this means the new bill will not bring an easy fix to the Gordon administration and lawmakers as they grapple with plunging state revenues. Gordon has cut or proposed cutting many public health programs, including mental health and substance abuse treatment that experts say will see increased demand from the pandemic and economic stress.

The new package does include tens of billions of dollars for vaccine distribution and for testing and other programs to mitigate the coronavirus’s spread, according to the New York Times. The agreement also includes $600 stimulus checks to many Americans, an extension of enhanced unemployment benefits and new Paycheck Protection Program loans for businesses.

Lawmakers, pundits and economists have criticized the package for not going far enough. The individual check payments and enhanced unemployment in it are half the size of what the March aid package offered.

The pandemic has battered businesses and personal finances for months, particularly since a second wave of infections began in the fall after many of the earlier federal aid programs had dwindled or ended.

Despite the state allocating $484 million to the Wyoming Business Council for various aid programs, many of the state’s businesses continue to struggle.

Many of the state’s restaurants and hotels are “fighting for survival,” Chris Brown, executive director of the Wyoming Lodging and Retail Association, told WyoFile last week.