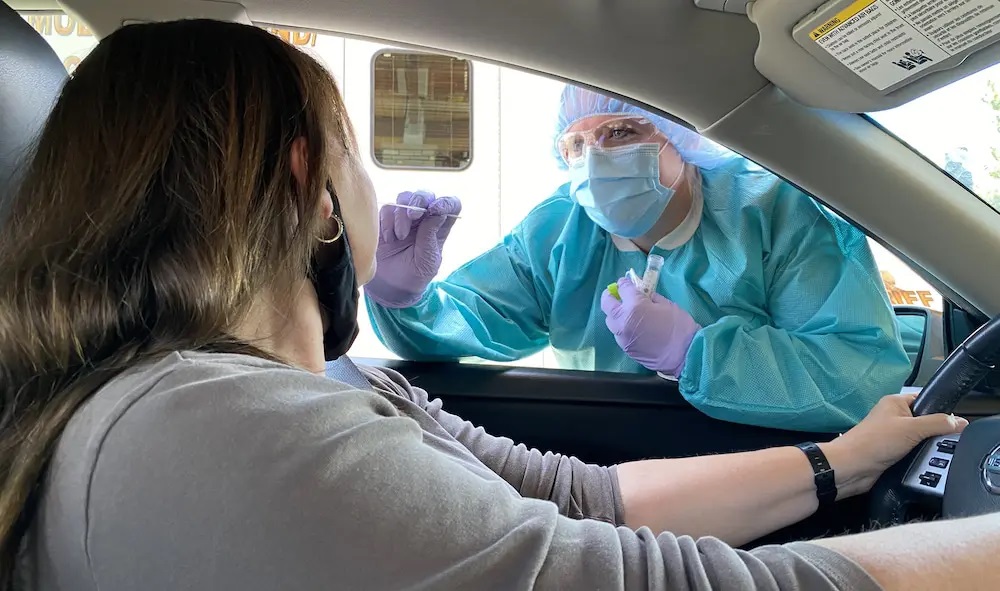 The impacts of Wyoming’s COVID-19 surge are being exacerbated by spikes in neighboring states and the concurrent strain on the region’s healthcare resources.

Demand for Wyoming’s scarce hospital capacity is expected to build, at least in the short term: County health officers have counseled that the state could soon see 3,000 new cases a day with 2% of those patients requiring hospitalization, Gov. Mark Gordon said at a press conference Friday.

“Our hospitals are overwhelmed today,” the governor said.

Hospital pressure in neighboring states – which often treat Wyoming’s most severely ill – makes managing demands on Wyoming’s hospitals all the more urgent, health officials have said since the pandemic’s beginning.

Current Utah Lieutenant Governor and now Gov.-Elect Spencer Cox told NPR in an interview aired Nov. 10 that hospitals in that state are no longer taking patients from southern Idaho and Wyoming.

Rep. Roy Edwards of Gillette, the state’s first known official to die of COVID-19, wanted to be treated in South Dakota, according to his son Mitch, but was life flighted instead farther from home to Wyoming Medical Center in Casper. The hospital in Rapid City was prioritizing in-state patients, the family was told.

The Eastern Idaho Regional Medical Center has not had to make intake decisions based on geography yet, a spokesperson there said. Though the hospital has reached its capacity for COVID-19 patients a few times in the last few months, for now it still prioritizes patients based on healthcare needs, not residency.

“We don’t know what the future will hold if the surge continues at this pace,” Coleen Niemann, public information officer for Eastern Idaho Regional Medical Center, said.

Wyoming had 191 hospitalized COVID-19 patients on Monday, Nov. 16, according to the Department of Health. The state still has intensive care unit capacity, with 56 of 128 adult ICU beds available, according to DOH.

Beds not the bottleneck

Having the trained staff to maintain high levels of care is a bigger concern than bed count, hospital officials say. “The No. 1 most important analytic around hospital capacity is staffing,” Niemann said. “It is not number of beds.”

The Idaho hospital has hired 150 people in the last three months, but it takes time for those workers to adjust to a new hospital’s protocols, Niemann said. “The supply of trained clinicians is short, it’s very small right now,” she said.

Wyoming will spend $10 million of the state’s allocation of federal CARES Act money to bring in medical staff and shore up the state’s strained hospitals, Gordon announced on Nov. 11.

“Medical staff across the state are strained and exhausted,” Eric Boley, the president of the Wyoming Hospital Association, said in a press release from the governor’s office. “There is an immediate need to bring in additional help to ease the burden shouldered by our healthcare professionals.”

But such personnel are in high demand nationwide as the country weathers an onslaught of cases. The hunt for healthcare workers by different states is becoming competitive, much like the sourcing of personal protective equipment and other medical supplies in the pandemic’s early months, Gordon said.

“Everybody’s trying to figure out how we can get quality care to come in,” he said. “There are very few opportunities here… This is not a game, this is a serious, serious challenge for our nation and for Wyoming.”

State officials will soon issue new public health orders, Gordon said. The executive branch is seeking input from chambers of commerce, businesses and local officials around the state, the governor’s spokesperson said, and those orders could be issued as soon as this week.

The Wyoming Department of Health announced 17 more COVID-19-related deaths Nov. 14. More than half of the state’s 144 deaths have been announced in the last month.

The virus, meanwhile, continues to spread at a startling pace, affecting most aspects of Wyoming life and crippling some civic functions. Widespread infections forced the closure of several state government buildings. In Campbell County, about half of the public health department’s staff contracted the disease, halting a flu clinic and testing, the Gillette News Record reported.

Senate President Drew Perkins (R-Casper) told the Capital Finance Committee on Monday that he is “still struggling with COVID.”

Worst in the country

Wyoming’s neighboring states all face rising waves of infections and hospitalizations. The region’s novel coronavirus surge is by some metrics the worst in the country.

North and South Dakota have the highest and second highest rates of new cases, respectively, according to data compiled by the New York Times. Wyoming is fourth on that list, while other neighbors – Nebraska, Montana and Utah – are all in the top ten. The Dakotas also have the highest increases in new deaths. Wyoming again ranks fourth in this category according to the New York Times.

North Dakota’s hospitals are so taxed by new patients and infected staff that Gov. Doug Burgum (R) announced an order allowing COVID-19-positive but asymptomatic health care workers to continue working in COVID-19 wards. Hospitals in his state were at their limit, Burgum said at a Nov. 9 press conference, according to the Grand Forks Herald.

Colorado is also seeing a sharp rise — the state saw a 118% increase in new case counts, a 125% rise in new deaths and an 82% rise in hospitalizations over the last week. On Sunday, Colorado hospitals reported that 220 new patients had been admitted in the previous 24 hours, according to the Denver Post. State officials have warned Colorado’s hospital could soon be filled to capacity.

Idaho saw a 57% increase in new cases over the past week, compared to the average two weeks earlier, according to the New York Times data. Hospitalizations there increased by 28%.

Utah’s hospitals are also filling – with more than 85% of the state’s Intensive Care Unit beds occupied by COVID-19 patients, according to the Salt Lake Tribune. Utah health officials consider that figure an indication of an “overwhelmed” hospital system.