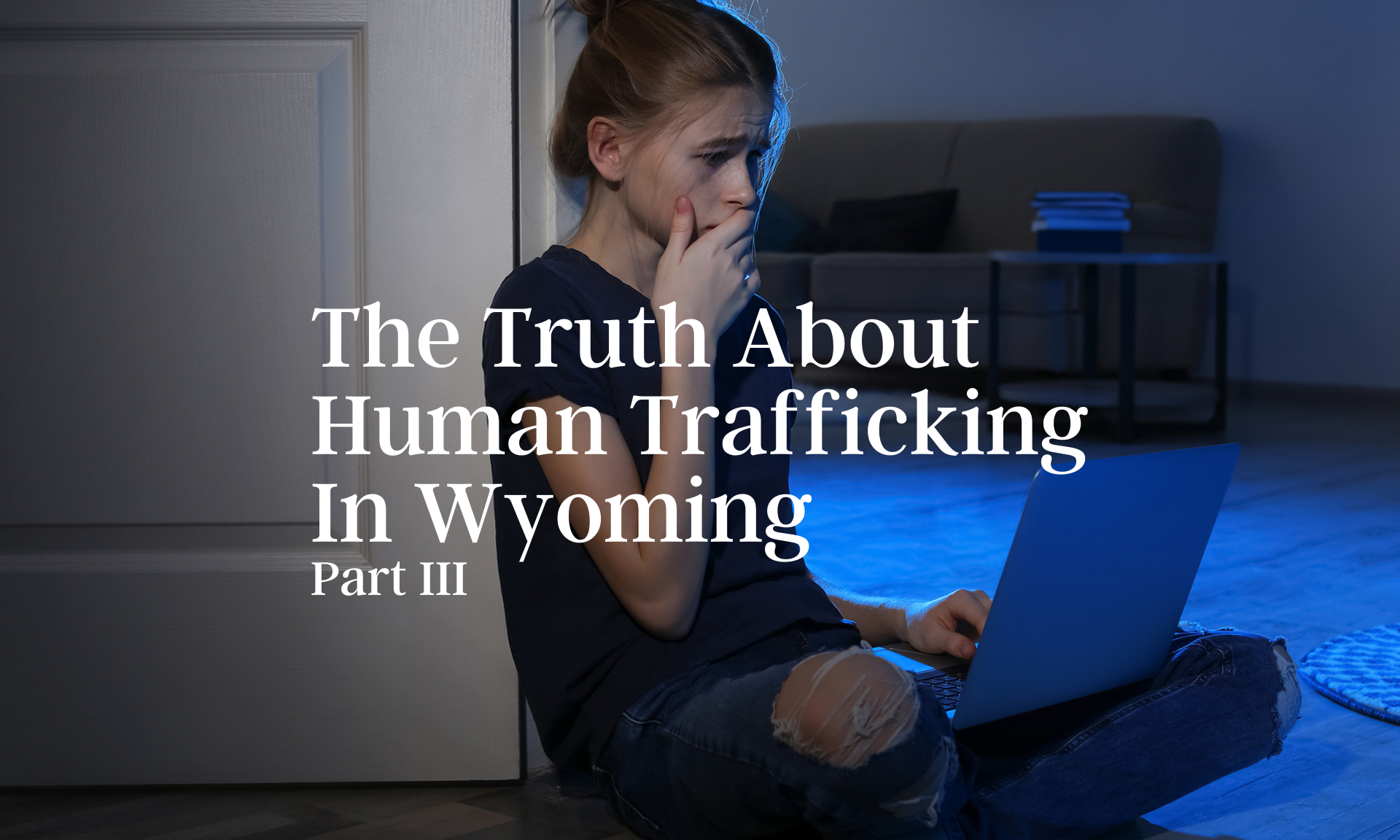 There’s a perception that human trafficking is a big-city problem that doesn’t happen in rural states like Wyoming. The truth is, however, that its ruralness and connectivity to major interstates makes the state prime for underground activity as a growing number of human trafficking cases are reported every year. This series takes a look at the nature of the problem, the people and groups tackling it and how awareness is changing law enforcement’s response and state legislation.

This is part III of a multi-part series.
Part I – Operating in the Shadows | Part II – Debunking the Myths | Part III – Grooming Victims | Part IV – Supply and Demand

It started at a slumber party when her daughter was 12. Christal Martin thought nothing about letting her daughter spend the night in a house with other girls where she knew her daughter would be safe.

What she didn’t take into account were the dangers lurking out on the internet. Technically, the rules say you have to be 13 to enter Omegle, a website enabling anonymous one-on-one video chats with strangers, though users are not required to set up an account. The site offers to pick a random person for you to chat with if you can’t find one yourself, and encourages users to remain anonymous unless you want to identify yourself, which it doesn’t recommend. A warning also lets you know that “predators have been known to use Omegle, so please be careful.”

That night, Martin’s daughter met several friends online, and soon, she was spending a lot of time on her phone. She began hiding her screen when her parents looked over her shoulder and increasingly began spending more time alone in her bedroom. Martin and her then-spouse noticed the changes in their daughter’s behavior but wrote it off as teenage moodiness.

“I thought it was weird,” Martin said Thursday by phone from her home in Sweetwater County, “but then I thought maybe she was just being a typical teen.”

Not long thereafter, there was another birthday celebration, and again, the girls got together for a sleepover. That night, Martin’s niece, who was just a couple months younger than her daughter, thought her cousin was acting kind of weird. She kept going into the bathroom and was chatting with a guy who claimed to be their age, yet was clearly much older with a really deep voice. Because his screen was purposely blurred, they couldn’t decipher what he looked like.

Martin’s daughter didn’t care about these discrepancies. All she knew was that he was her friend, thought she was beautiful and told her how much he loved her.

Martin packed her daughter down to the Green River Police Department, where she turned over her devices, much to her daughter’s dismay. When the police attempted to locate the men’s IP addresses, the locations would change every few seconds from China to New York to New Zealand. Using a VPN app, the predators were able to hide their location. Without a location, there was nothing the police could do, they told her, and Martin’s daughter’s case remains on hold to this day until police can physically track down the devices containing the illicit photos and videos.

Where Martin was livid with the perpetrators, her daughter was angry at her. After leaving the police station, her daughter was worried about the men she’d just turned in, going so far as to access a device to tip the men off, apologizing that her mother had made her turn them in.

The anger continued as did her daughter’s fervor to get ahold of devices, much like an addict out of control, prompting her to borrow an old phone from a friend as well her mother’s to engage with these men online. When those devices were taken away, her daughter’s desperation and anger escalated. No matter what her mom said, she refused to believe she had been victimized and instead accused her mother of trying to take away her friends.

“I had no idea what to do,” Martin said. Such was the power of grooming.

She was scared. Not only were the predators still out there, but they also had her daughter’s IP address and could easily locate the family’s home. Given the fact that they are right off a major interstate, Martin was concerned about the family’s safety as her daughter continued to sulk and stew.

Meanwhile, the teen persisted in acting out, sometimes sneaking out of the house in an attempt to get male attention as Martin tried to reason with her about her negative self-esteem and the dynamics of healthy relationships. Nothing worked.

Finally, nearly two years later, she and her then-spouse were at wit’s end and sent their daughter to a treatment facility to begin the long process of recovery.

Like her daughter, Martin, too, struggled to make sense of the situation. As she searched for local resources to help she and her daughter, she found there were no options in Wyoming. The more she read, the more she realized her daughter had been a victim of sex trafficking and effectively had been groomed by her predators online.

Grooming is an insidious process by which an offender selects a potential victim, builds a relationship with them as a way to gain their trust, according to the National Center for Victims of Crime. In doing so, they break down their victim’s defenses in order to start sexually abusing them by playing a vital role in their life and encouraging them to isolate and keep the relationship a secret. Then they initiate sexual contact and control.

Typically, the process takes anywhere from six to nine months, according to the American Psychological Association, though some studies show it can take as short as 18 minutes to form a connection with a child.

And as Martin learned more about the grooming process and the ways in which predators prey on their victim’s vulnerabilities, she realized her daughter’s earlier traumas left her open for exploitation.

Now, Martin sees how the introduction to this material had wired her daughter’s malleable brain for unrealistic sexual desires.

Then, there was the loss of her stepfather, who had been murdered in 2014. The two had been close, Martin said, and her daughter had taken the loss hard.

These deep-rooted issues Martin now sees made her daughter a vulnerable target, especially when it came to potential father figures telling her she was beautiful, they loved her and would always take care of her.

“She wanted that extra attention,” Martin said. “She needed to fill that void.”

Today, nearly three years later, her daughter is doing really well, Martin said, but it’s a continual process with constant conversations and self-assessment about taking risks and forming healthy relationships. The two continue to heal from their wounds.

For her part, Martin established the nonprofit, Sweetwater Against Trafficking, in 2017 to help raise awareness about online exploitation and trafficking for people like her who weren’t sure where to turn for help.

“I thought, ‘I can’t be the only one going through this right now’,” she said. “These individuals are criminal masterminds and are no doubt targeting other children.”

Now, she partners with other likeminded groups to provide resources to help educate other parents and guardians about the dangers of human trafficking, which as she learned, does happen in Wyoming, despite attitudes from some to the contrary. Sharing her story, she rightfully thought, would resonate with others and help draw awareness as these types of crimes continue to skyrocket.

In the past decade, child pornography has become one of the fastest growing crimes in the United States, according to data from the Federal Bureau of Investigation (FBI), with a 2,500% increase over the past 10 years. Likewise, the National Center for Missing and Exploited Children reports the number of cases of exploited children continues to grow exponentially every year.

As a mother, Martin had no idea about the number of ever-changing websites and apps that have become a haven for online predators and pedophiles, with sites like Omegle offering cover with limited oversight and absolute anonymity under a broad cloak of disclaimers that warn: “Understand that human behavior is fundamentally uncontrollable, that the people you encounter on Omegle may not behave appropriately, and that they are solely responsible for their own behavior. Use Omegle at your own peril. Disconnect if anyone makes you feel uncomfortable.”

This is just one of many such sites, Martin noted.

“These online devices are allowing predators into their backyards and homes,” she said, encouraging parents and guardians to be vigilant about their children’s online profiles and to communicate the potential dangers with their children.

That’s the biggest piece of advice that Martin has for other parents: talk to your kids about the potential dangers.

“Start opening up that conversation,” she said. “Don’t get upset with them if they don’t want to listen. Take the opportunity to talk about hard topics like pornography and try to make a plan to help those vulnerabilities.”

The final stories in the series examine the underlying myths of prostitution versus sex trafficking and the ways in which law enforcement is tackling the problem as well as the stories of two private investigators who volunteer their time to find missing youth and adults throughout Wyoming.

This is part III of a multi-part series.
Part I – Operating in the Shadows | Part II – Debunking the Myths | Part III – Grooming Victims | Part IV – Supply and Demand

If you are someone you know is a victim of human trafficking, call the National Human Trafficking Hotline at 1-(888) 373-7888. The hotline is available 24 hours a day, seven days a week in more than 200 languages. All calls are confidential and answered live by highly trained Anti-trafficking hotline advocates.