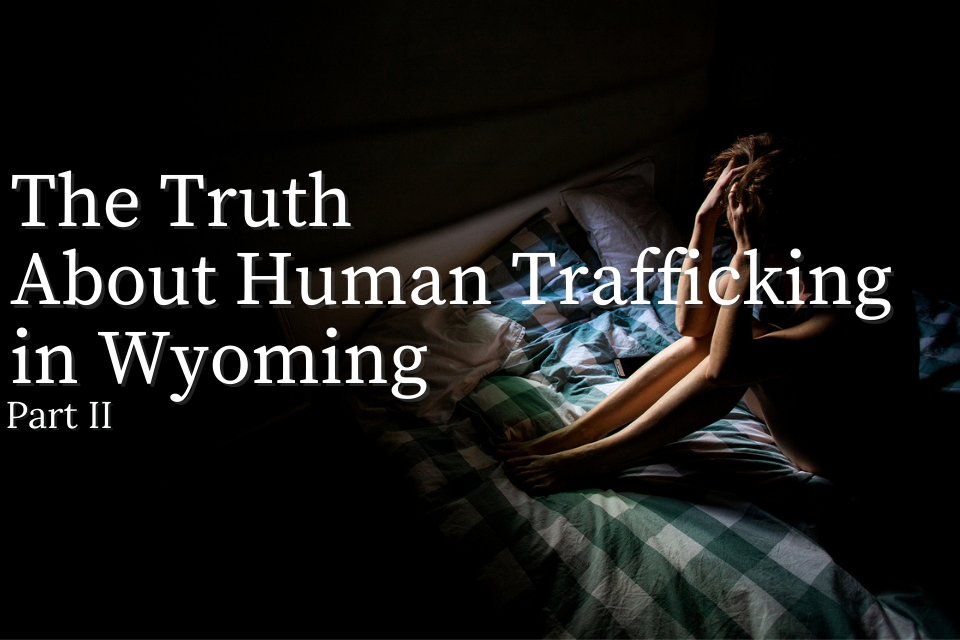 This is part II of a multi-part series.
Part I – Operating in the Shadows | Part II – Debunking the Myths | Part III – Grooming Victims | Part IV – Supply and Demand

One glaring misnomer when it comes to human trafficking is that victims are snatched out of malls or shopping center parking lots by cartel members in black vans with tinted windows who have targeted them based on age, gender or hair color.

Though this occassionally does happen, it’s not what law enforcement and prosecutors are seeing in Wyoming, according to Cara Chambers, director of the Division of Victim Services for the Wyoming Office of the Attorney General.

“It’s really high risk to snatch someone off the street,” Chambers said by phone Monday from her office in Cheyenne. “People don’t want to take that chance.”

In reality, human trafficking is much more insidious and personal in nature, she said, and in many cases, begins in one’s home and family. Sometimes it’s the child’s own mother selling her kids for money as in a recent case in Campbell County where a mother was charged with multiple felonies for promoting the prostitution of her two young daughters.

Other cases involve children being groomed and abused by a father, stepfather or boyfriend figure. Children in the foster care system are particularly vulnerable to exploitation, Chambers said.

Another fallacy is that human trafficking is a big city problem and one that doesn’t happen in Wyoming given its rural and outlying nature. Not so, Chamber said, noting that its remoteness is actually makes the state prime for such activity when it comes to both sex and labor trafficking.

“If it doesn’t start here,” she said, “it’s coming here, but it’s homegrown in Wyoming as well.”

Circuits, in which traffickers make a loop through the state with prostitutes advertising on social media for sex at hotels in various cities along the way, have become increasingly popular. As have circuits at big events like Cheyenne Frontier Days. In 2016, a joint effort between the Cheyenne Police Department and the FBI made its first sting, arresting 15 people involved in trafficking and solicitation. Subsequent years have yielded similar busts at the annual event in Cheyenne.

It’s a never-ending cycle, Chambers said, and the goal is not to bust the victim but the one doing the trafficking, which sometimes can be tricky as in the case of 2017 arrest of a prostitution sting operation at Frontier Days where a California woman, who had been groomed by a man she met online, ran a circuit recruiting other women.

In this case, the mastermind of the operation was a prisoner in California running the prostitutes from a stolen cell phone while incarcerated.

Equally problematic has been the state’s slow reluctancy to differentiate between prostitution, a misdemeanor, and the more serious offense of human trafficking. It took Wyoming lawmakers years to finally adopt legislation making the latter a felony offense.

Chambers, as the newly appointed director of victim services, was instrumental in getting legislation passed along with Wyoming Representative Cathy Connolly, a Democrat from Laramie County, as well as Teton County Republican Representative Keith Gingery.

At the time of its passing, there had been two cases of human trafficking prosecuted in Wyoming, a number that has grown substantially over the years, Chambers said. Exact numbers are difficult to count, she said, as many – particularly those involving child pornography and trafficking – and prosecuted federally or in the state of origin.

In waning years since first passing legislation, Wyoming is rapidly making up for lost time, Chambers said, citing a 2019 report card from Shared Hope Institute for Justice and Advocacy that raised the Cowboy State’s grade from an ‘F’ in 2011 to a ‘C’ in 2019. In particular, Wyoming received top grades in both criminalization of domestic minor sex trafficking and criminal provisions for traffickers. South Dakota and Maine were at the bottom of the list with ‘D’s.

Wyoming has also formed a human trafficking task force involving multiple agencies, the University of Wyoming and the Wyoming Attorney General’s Office, to cull resources and improve communication to combat trafficking and exploitation on the ground as well as training first responders and medical personnel to identify victims.

The key, ultimately, Chambers said, is to end the demand as opposed to prosecuting victims and those who solicit sex for money, in many cases, without knowing that the victim is being exploited.

“They (traffickers) do it in plain sight,” she said, “and sadly humans are renewable resources, and there’s always a victim that can be found.”

Chris McDonald is a guy who on a daily basis sees the worst of the worst when it comes to child offenders As a 16-year Wyoming Department of Criminal Investigations (DCI) special agent, who now heads up the Internet Crimes Against Children (ICAC) Division in Cheyenne, he can safely attest that exploitation and trafficking involving kids is on the rise in Wyoming.

Last year, he estimates, his division investigated 300 cases, which has more than doubled this year. This, he thinks, is the result of more kids being stuck at home during the coronavirus pandemic.

Of the cases he oversees, many involve child exploitation material, which he deliberately does not call pornography because that somehow legitimizes it in his mind. Unfortunately, there’s no shortage of content or demand when it comes to these materials, he noted, given the secret society of adults who trade it amongst themselves as currency.

Another large part of his job is overseeing cases involving kids as young as eight who are being exploited by strangers they’ve met online. In many cases by an adult pretending to be their age. The kids are asked to provide explicit photos or videos, which the perpetrator then uses as blackmail, threatening to share the images with friends and family if they report them or don’t produce more.

“It’s an effective strategy,” he said, “because many kids are afraid to admit what they’ve done.”

In some cases, it’s the parents who intervene or internet service providers who identify explicit material via algorithms or other filtering systems, which they are then obligated to report.

A lot of the cases they see in Wyoming involve parents or friends sexually assaulting children in photos or videos for distribution. He’s not at liberty to discuss particular cases or investigations in process, just to say that there are currently many underway. All time insensitive for he and his small staff of six agents.

He’s also a member of the state’s human trafficking task force that focuses on getting victims services and encouraging them to report. These are by far the hardest cases to work, he said, given the effectiveness of the hold perpetrators have over their victims.

“It’s straight up manipulation,” he said, “involving a targeted program to isolate the victim and turn them against their families.”

The hardest thing is knowing you have a victim who won’t report, he added.

Monitoring all the various sites advertising prostitutes is an exhaustive process, which is done by partnering across agencies on both the state and federal level. Many of their tips come from the National Center for Missing & Exploited Children (NCMEC).

In the end, he said, parents or guardians are the best defense. Protecting children from criminals online ultimately requires diligent monitoring, he noted, and usage should be limited to children of a certain age. The fissures for entry are endless given the number of apps and social media platforms like Instagram and Facebook, many of which parents aren’t even aware. Online gaming is likewise a viable platform for exploitation, he said, as players communicate with one other and form a bond.

“The biggest thing that parents can do is monitor their child’s social media,” he said, “and have open conversations with your kids about what might happen.”

Another fallacy is that those being trafficked are chained to beds or locked in basements or closets. This is seldom the case in her experience, according to Gillette Abuse Refuge Foundation (GARF) Executive Director Margie McWilliams, who has found that many of these victims are hiding in plain sight. The people you see and run into in your everyday life.

“They’re living and walking amongst us,” she said.

In the past year, GARF has helped two victims of human trafficking and two more the year prior.

Mostly, these women were from other countries brought to Gillette either as brides who met their husbands online or as military spouses. All were being exploited for sex or free labor or made into personal slaves. That’s another huge component of human trafficking, McWilliams noted, particularly for victims who don’t speak the language or understand the culture and are entirely dependent on their abusers, who use their vulnerabilities as bargaining chips.

“They’re so afraid, they become dependent,” McWilliams said, “and they don’t realize that life could be any other way.”

In these local cases, the women just wanted to go home, so GARF partnered with Wyoming Coalition Against Domestic Violence and Sexual Assault (WCADVSA) in Laramie, who have immigration lawyers on staff to help facilitate the immigration process. Ultimately, no matter the case, McWilliams said there are resources available to help victims of all forms of human trafficking.

And these are only four cases, she noted, but is sure there are many more throughout the county and state.

The key is training people to recognize the signs and to get the word out that there’s help. Right now, GARF is partnering with other local agencies like Uprising in Sheridan, a non-profit focused on human trafficking awareness and education, as well as the Y.E.S. House and other groups, to educate individuals and those on the front lines about the nature of human trafficking and opportunities for offering help and support.

The next segment in the series examines efforts of the ground to tackle the growing problem of human trafficking on Wyoming’s roadways as well as the stories of two private investigators who volunteer their time to find missing youth and adults throughout Wyoming.

This is part II of a multi-part series.
Part I – Operating in the Shadows | Part II – Debunking the Myths | Part III – Grooming Victims | Part IV – Supply and Demand

If you are someone you know is a victim of human trafficking, call the National Human Trafficking Hotline at 1-(888) 373-7888. The hotline is available 24 hours a day, seven days a week in more than 200 languages. All calls are confidential and answered live by highly trained Anti-trafficking hotline advocates.