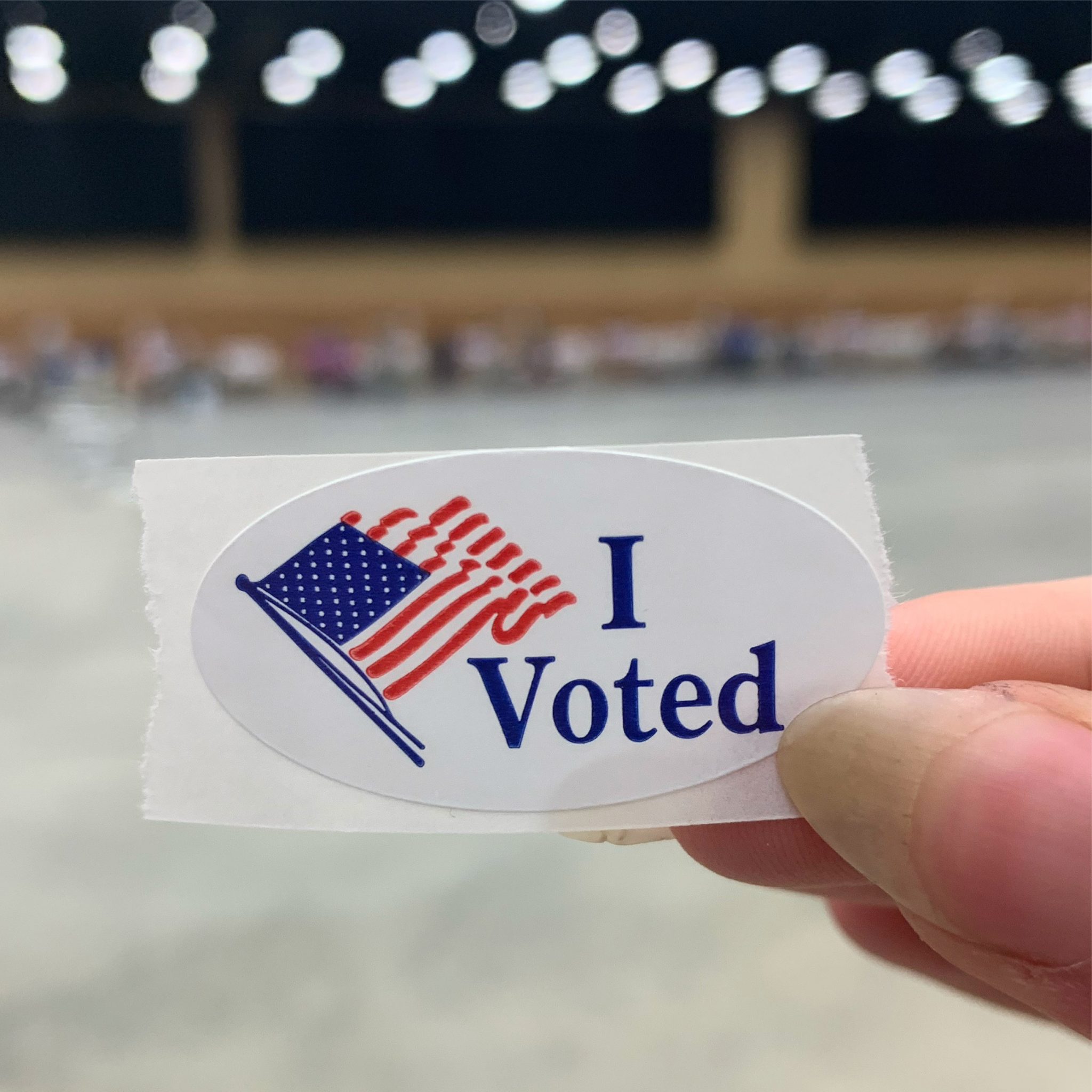 The Wyoming Primary elections are now over, and the votes have been counted, according to Campbell County Clerk Susan Saunders, who appeared visibly frazzled Wednesday morning as if she hadn’t gotten much sleep. She hadn’t, and she and her staff still had a lot of work to do.

They spent much of Wednesday morning behind closed doors counting write-in ballots, she said, the majority of which involved City of Gillette Council seats. By Thursday morning, they had their results, but had to await the Canvass Board’s final examination to declare the results official.

Ivy Castleberry, public information coordinator for Campbell County, said in an email Friday that the Canvass Board met Thursday and performed a reconciliation of the voted ballot totals in the poll books. The write-in votes for Party Precinct Committee Persons were also verified, but those results have not been released, Castleberry said. The Elections Office has up to 40 days to prepare and present the write-in precinct information to the party chairmen, according to Castleberry.

Voter turnout was significantly higher than the turnout for the 2018 primary. Just over 66% of registered Campbell County voters cast ballots Tuesday. The 2018 primary turnout, by comparison, was 47% according to figures found on the Campbell County website.  The primary turnout Tuesday nearly matched that of the 2018 general election, where 67% of voters participated. Of the 9,728 ballots cast Tuesday, 9,088 were cast on the Republican side, versus 480 Democrat and 160 non-partisan ballots.

Campbell County Elections Coordinator Charity Stewart said Friday that election staff had to familiarize themselves with the reporting system from the state’s new vote counting system. This resulted in some delay releasing results, she said. Write-in votes were still being tabulated as of Friday morning, but all other results are official, she said.

Hardline conservatives had a good night with several of their endorsed candidates winning by significant margins , including Campbell County Commission candidates Del Shelstad and Colleen Faber, both of whom ran for the first time after being selected to fill vacancies.

Most recently, Faber was selected from three candidates selected by the Republican Party to fill the seat of of Campbell County Commissioner Mark Christensen, who resigned this winter. Through holding companies, Christensen owns County 17.  Shelstad was appointed in December of 2018 to fill the vacancy created when Clark Kissack resigned in October of that year.

Speaking Wednesday, Shelstad attributed his victory as a referendum for a return to traditional Wyoming values because “voters miss the Wyoming they grew up in,” which he said he plans to restore and protect, as opposed to running on specific issues facing the county.

“A lot of people were surprised to watch me lead a campaign that’s based around the Constitution and people’s rights rather than the county’s issues,” he said by phone Wednesday morning, “but the people of Campbell County want to be heard. They want to preserve their rights.”

Among those, Shelstad reiterated his strong belief in protecting the Second Amendment as a preemptive stance in the event that Wyoming – or the federal government – does choose to pass legislation tightening gun laws. This spring, Shelstad presented a resolution, which was unanimously passed, to declare Campbell County a sanctuary county for Second Amendment rights.

He also said he viewed his victory as a clear indication of a preference for a new generation of leaders committed to conservative values and preserving the “Campbell County way of life.”

In terms of economic diversification in the face of a nose-diving energy sector, Shelstad said he’s looking for new voices and new ideas.

“There are a lot of old-school businessmen on the economic development board,” Shelstad explained. “I think that if we get some younger people involved with developing the economy, it could open up a lot of doors. I always say we’re only one good invention away from booming again.”

For her part, Faber attributed her victory to her vast knowledge and experience with Campbell County’s fossil fuel industry along with her clear message of fiscal responsibility and economic diversity.

Faber, who also is a rancher, has worked as an environmental manager for 15 years at Anadarko Petroleum, where she said she learned Campbell County’s tax structure and revenue collection process.

“The biggest thing I’ll keep focusing on when I’m elected is just the budget,” Faber said. Despite recent down turns in oil, gas and coal prices, Faber said that an increase is possible considering Wyoming champions horizonal drilling for oil and gas.

And despite slight downturns in fossil fuels, she reiterated that the county is still a major player both in the state and nation as a major energy producer. Campbell County has the highest tax valuation in the state, she noted.

“We can provide a lot more than other counties in this area, so there are still a lot of options for us to develop our economy using the resources we have.”

Another victory for the hardline conservatives was Troy McKeown’s upset over long-term Senator Michael Von Flatern, who was ousted by more than 1,000 votes.

McKeown did not respond to County 17’s multiple requests for comment.

While Faber celebrated what she saw as a return to “one Wyoming Republican Party,” Shelstad pointed to a division, noting that voters seemed more drawn to the traditional conservative message, which he called a “crowd pleaser.”

“All Republicans are supposed to be conservatives,” he explained. “But now, you have these people joining the Republican party without actually believing in that way of life.”

Shelstad was referring to the newly formed Frontier Republicans (FR), which calls itself a “grassroots, statewide effort to encourage participation while promoting integrity, respect and civility within the Wyoming Republican Party with a focus on engagement, education and productive communication.”

The group splintered in recent years due to what one of FR’s co-founders, Charlene Camblin, referred to as a growing intolerance to open debate and ideas as opposed to angry name calling and vicious personal attacks and dishonest smear campaigns in the local Republican party.

To this end, she referenced Wyoming Republican Jeff Raney’s recent comment in a recent Gillette News Record story in which Raney referred to FR as a “bunch of trough-feeding parasites.”

Raney reiterated this view during a phone interview Friday, doubling down on FR as a party comprised of “parasites,” attempting to taint the traditional party with leftist ideals, specifically when it comes to the county’s tax dollars. He called Camblin “queen of the trough-feeding parasites.”

‘The extremists who want to take it over are trying to shift the Republican party into the Democrat Party,” he said. “They want to turn us blue.”

This is the type of comment, Camblin said, that she and her group find so alienating.

And though she conceded that the hardline candidates did much better than FR-backed candidates, including Von Flatern’s loss to Mckeown for State Senate District #24 and Micky Shober’s loss to John Bear for House Representative in District #31, she attributed the upset to the FR’s inability to inspire other like-minded Republicans to get out and vote in the primary.

“This was definitely a disappointing primary,” she said Wednesday. “There was a lot of apathy and people didn’t vote that should have.”

This will be an area that FR will work on moving forward, she said, to inspire people to get involved and vote. That said, the night wasn’t a total loss Camblin noted as FR filled 65 out of 95 precincts with FR-backed candidates, with potentially more to come after write-in ballots are counted. Both Camblin and her husband Doug retained their committeeman and woman seats in district 7-1 on Tuesday.

Precinct committee chairmen and women are vital in replacing elected officials when, for whatever reasons, that particular office holder either dies or steps down. In the past, the committee had been heavily stacked with hardline Republicans, so now Camblin said the precinct  will be more balanced.

With regard to Raney’s comment, Camblin took exception to his divisive rhetoric, particularly when it came to labeling those new precinct committee chair people who she referred to as civic-minded business owners, public officials and citizens with deep roots and commitment to their communities, such as Rep. Eric Barlow and his wife Kelly, Commissioner Rusty Bell and wife Toni, Commissioner DG Reardon, Micky Shober and Paul and Andrea Hladky among several others.

Neither Raney nor his wife Cathy were re-elected in their precinct seats during the primarie, though Raney denied having run.

“I didn’t run for anything.” Raney said, despite his name appearing on the Republican primary ballots. Stewart explained Friday that in order for an individual to be featured for any elected position on the voter’s ballots, they must file with the elections office to do so.

“Even the people who were already in that seat had to file with an application in order to appear on the ballot,” she said.

Raney revealed that rather than focusing on his own political outbranching, he directed his efforts toward campaign strategies for various members of the Republican party, including Troy McKeown, John Bear, Bill Fortner, Martin Phillips, Chip Nyman, Roy Edwards, Tim Hallinan, Del Shelstad and Colleen Faber.

“Every one of their campaigns were on the high road,” Raney said, discounting the accusation of stirring the pot with name calling.

“There was (sic) no personal attacks, there was no unethical behavior, there was no behind-the-back whisper campaigns like Charlene Camblin loves to do. She loves to spread rumors that aren’t true and just see what happens.”

This is exactly the type of infighting that Camblin and her group say is ineffective when it comes to backing the Republican agenda.

Raney acknowledged that the FRs had a good night when it came to filling precinct seats while crediting an intolerance for crooked politicians and fed-up voters for the Republicans’ success on Tuesday.

“They won the county but lost the state,” Raney said of the FR’s, going on to thank all the conservative Republicans and voters of Campbell County for turning out on the primaries and making this clean sweep possible.

This, unfortunately, speaks to a growing intolerance for a lack of civility and open debate of which Camblin and her group are committed to bringing back, if necessary, she said, one precinct seat a time.

The Wyoming General Election will be held November 3.