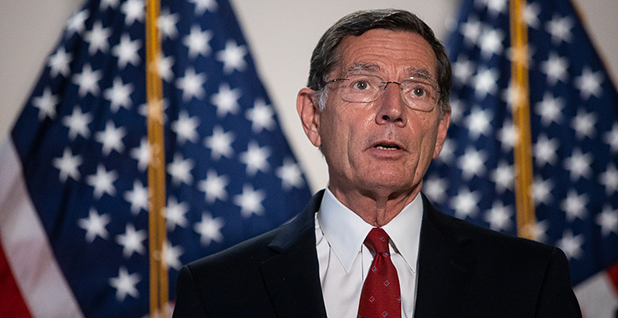 The Senate Environment and Public Works Committee will head to Wyoming this week for a field hearing to analyze the state’s efforts on carbon capture and sequestration.

The hearing is likely to provide another opportunity for EPW Chairman John Barrasso (R-Wyo.) to advocate for his bill to expand the deployment of carbon capture through a tweaked 45Q tax credit and carbon dioxide pipeline permitting reforms.

Dubbed the “Utilizing Significant Emissions With Innovative Technologies (USE IT) Act,” S. 383, Barrasso’s bipartisan proposal has remained one of his legislative priorities this Congress.

He has attached the bill to his highway reauthorization measure as well as the recently passed Senate fiscal 2021 defense authorization bill.

Such a focused research and capture-related infrastructure effort could not come at a better time for a technology still widely in its infancy when it comes to commercial applications.

The Petra Nova carbon capture facility — attached to a unit in NRG Energy Inc.’s coal-fired W.A. Parish Generating Station outside Houston — is currently sitting mothballed after the utility determined the oil price environment did not warrant its continued use (E&E News PM, July 28).

Like much of carbon capture, Petra Nova’s CO2 is meant for use in enhanced oil production at nearby fields. As of January, the facility had captured more than 3.9 million short tons of carbon emissions, which was used to produce over 4.2 million barrels of oil, DOE said.

Its temporary shutdown has raised questions about the economics surrounding carbon capture — a technology seen as critical for the global reduction of carbon dioxide, especially as it relates to the industrial sector (Energywire, July 31).

To help carbon capture projects keep on their timelines and attract investors, particularly amid the pandemic, some lawmakers are pushing for an extension of the 45Q tax credit.

Wyoming, in addition to being Barrasso’s home state, offers a backdrop of a state interested in expanded carbon capture deployment to bolster its oil production capabilities, ranked ninth nationally. The state also ranks as a leader in coal production.

First-term Republican Gov. Mark Gordon has embraced technology as a critical tool against climate change, and Wyoming’s universities have been at the forefront of research and development activities.

Reprinted from E&E Daily with the permission of E&E News. Copyright 2020. E&E News provides essential news for energy and environment professionals at www.eenews.net.