It was a drive-by parade in which no cars drove by. Instead, each of the 24 vehicles adorned with balloons and handwritten signs idled in place as tearful passengers said their goodbyes to Gillette’s reigning “queen,” Loleta Marie ‘Leta’ Record Tanner.

Decked out in an oversized fleece sweater with a gold tiara perched on top of her white hair, the beloved, petite icon stood on the curb in front of her house on Country Club Drive Thursday morning, bucking social distance guidelines as she personally greeted every car. Having long since abdicated her “throne,” a folding chair beside her ‘lady in waiting’ and long-time friend Norine Kasperik, Leta clasped hands and threw kisses through rolled down windows as the slow procession inched its way down the street.

“We love you, Leta,” one driver called with tears pooling in her eyes. “You’ve done so much for this community, and we’re going to miss you.”

This day, as she’s done for her entire life, Leta literally rose to the occasion as she gets ready to leave her hometown to move to Texas, where her son lives. Leta smiled as long-time friends and neighbors told her how much she’ll be missed while thanking her for all she’s done for the community through her decades of public service, including her 12-year tenure on Gillette City Council, Wyoming P.E.O. Sisterhood, Mayor’s Art Council as well as an exhaustive list of other leadership roles, awards and organizations including her massive contributions in helping to build Gillette College. Recently, Mayor Louise Carter-King proclaimed May 19 Leta Tanner Day, giving Leta an honorary key to the city in appreciation of her many alms. This follows Senator Mike Enzi’s official tribute to Leta in the Congressional Record on May 12. 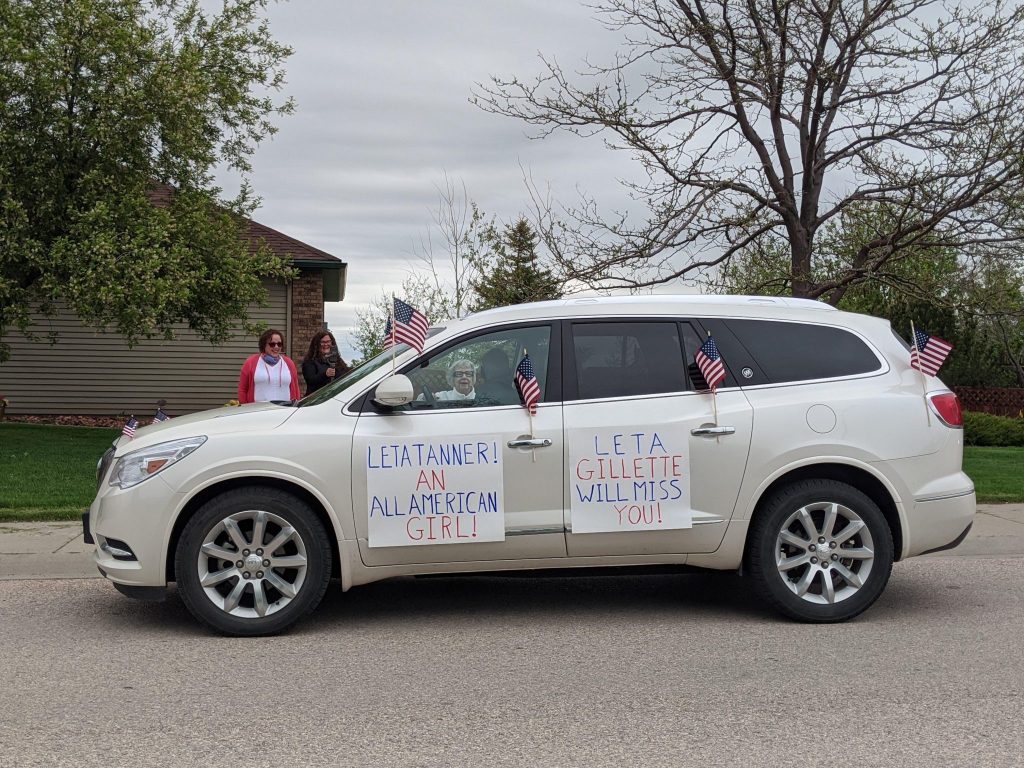 One of her favorite recognitions, Leta said as she waited for the cars to arrive, was serving as the Grand Marshall in the 2013 Fourth of July Parade. She’d ridden in the first car, she recalled with a wistful smile. She also joyously recalled her decade working for former U.S. Senator Al Simpson both in northeastern Wyoming and Washington, D.C. She’s proud of these accomplishments, she said, and clearly her impact on her community and her compassion for those she diligently served is evident today in the faces of those present this morning who stop to thank her as they say goodbye. She’s had a heck of a life, she said, and she’ll miss it here.

The royal motif is carried through by many that morning, including the woman who yelled, “Queen Leta, I always knew you were a queen,” through an open car window as Leta’s eyes grew glossy behind her signature black frames.

By the time Leta reached the last car, her tiara had slipped to the side and she was halfway down the block having eagerly met each car rather than let them come to her. It’s a theme of selflessness that has carried throughout her life.

When the last car passed, Leta stood in a small group with Norine and others in her front yard as she reflected on what this meant to her to have so many people come to personally say goodbye.

“It was a lot of fun,” she said. “Usually I’m just working by myself and here are all these people. It’s wonderful!”

“What a special day for you,” Nick Kasperik reiterated, clasping Leta’s hands as he teased her about eating the first piece of her cake. “Look at all these people who love you and are going to miss you.”

Leta smiled up at him, telling him she’d be back. This is her hometown, she said, and though she’s moving, her heart remains with the community of Gillette.